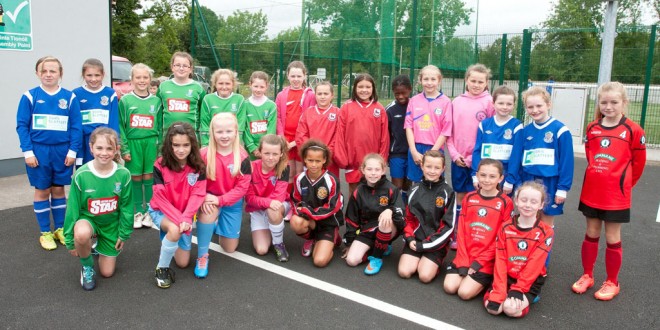 Mascots and ball girls for the U-19 international in Tulla. Photograph by Arthur Ellis

Tulla United has championed ladies soccer in recent years but trainer Murdoch Gleeson noted it was his daughter, Tara, who set the wheels in motion for ladies soccer back in 2010 when she asked ‘why girls can’t play soccer?’
On Thursday last, Ireland played Scotland in an historic U-19 women’s international friendly in Tulla. The impressive Cragg grounds looked immaculate as the sides played out an entertaining 1-1 draw, seven years after the FAI promised the club an underage international match.
Speaking to The Clare Champion about his daughter’s eagerness to play soccer, Murdoch said Tara had a strong desire to play for her home club.

“I had an U-16 boys team at the time and my daughter Tara asked me one day ‘how come girls can’t play soccer?’
“She’s 17 now so, at the time, she would have been about 11. She would have been playing with her older brother and younger brother basically kicking a ball around.”
Murdoch said Tara was always watching soccer with him on television. “She was more interested in soccer than the two boys. So I said to her if you get your friends, I’ll get a spot on a night of the week and I’ll coach you. I thought I’d have eight or nine but on the first night I had 23. I was shocked by the turnout on the first night.”
Murdoch said he then had to go and look for help to train the girls from his club colleague Pat McNamara
Murdoch said the girls come from a plethora of different villages around East Clare. “My girls who have gone through the system over the last five or six years range from Ennis to Mountshannon. They come from all over Clooney, Feakle, Kilkishen, Scariff, Bodyke; they’re coming all over for soccer here.”
He said while Tulla United AFC now has women’s teams that are challenging for honours, that was not always the case.

“We took the hammerings from Lifford for years, the 10-nils and the 11-nils but they kept going. Some day we knew we’d get there and last year we won the U-16 league for the first time, which was the original squad really that had gone on over the years. We won the Munster shield, so that was a great year for us really,” he said, adding, “We’ve gone from having that little first team, which was an U-11 team, but now we have U-8, U-10, U-12, U-14 and U-16.”
Murdoch said they now have a trophy cabinet they can be proud of. “As you can see today, there’s a lot of girls around. We’re kind of proud of the fact that, in such a short time, we have such a girls situation built up here. It’s great.”
Tara Gleeson described last Thursday as a big day for Tulla and for ladies soccer.
“I played U-14 and U-16 girls soccer. I didn’t think we’d have the growth. It’s continued on now and there’s U-10, U-12, U-14 and U-16; I didn’t think there’d be that many teams in Tulla, so it’s great to have that many playing.”
Tara said while there was lots of Tulla United girls involved in the international match event as mascots and ball girls, there was an abundance of others from places such as Connolly, Lifford, Park Rangers and Ennis Town also helping out. “There’s a lot of our U-10s and U-12s helping out with mascots and matches and they love it, they’re having a great day.”
Tara said the social side is also an important benefit of having such a strong club, with girls taking part from all over East Clare. The current U-16 squad has 20 girls from 10 different parishes.
“We know them in school now because we all go to school in Tulla and it’s nice to know them beforehand through soccer,” she noted.
Tara is now over age for the U-16s, so she trains the U-10 and U-12 girls. She said she is thoroughly enjoying the experience, however, she does miss playing from time to time.
“Sometimes I do. When you see the other girls playing, you’d like to be out there. When you’re training U-10 and U-12, it’s not as bad because you’re still involved.”
Trainer Pat McNamara said he has been involved for about 30 years at Tulla United and the facilities are the single biggest reason why the club is becoming so successful in ladies soccer.
“There’d be no ladies team only for the facilities because if they had to go over to an ordinary pitch and no dressing rooms, they’d be definitely no ladies [soccer],” he said.
“We play around Munster a good bit in competitions and any ladies team involved usually has good facilities, like Killarney and Listowel, they all have similar facilities and they all have ladies teams. Any of the teams that have no facilities would have no ladies teams and it’s more or less the same in Clare too.”
Pat said the international ladies match was great because it highlighted the facilities and the set-up for ladies soccer in the club. “We have about 70 or 80 ladies involved here today and they’re all out. They are mainly from Tulla but there’s other clubs represented as well. We have flag-bearers, mascots and ball girls and then after the international, our U-16 girls are playing Cregmore-Claregalway, who are the Galway champions, so it’s a great day for the club.”
Chloe Moloney of Connolly Celtic, in Kilmaley, who has been playing international underage soccer for Ireland for two years, lined out with the Irish team in the match against Scotland.
Last June, Chloe represented Ireland in the U-17 European Championships in Iceland alongside Lifford’s Aislinn Meaney. She said it was great to be playing for Ireland in Clare for the first time.
“It’s so good to be back at home playing. There’s nothing better than your home crowd really and there was a great turnout here as well, so thanks to everyone that came,” she said. “All my family were here. Even though they follow me everywhere I go, still it’s great to have family and friends back from Quilty where I live, so it’s great.” 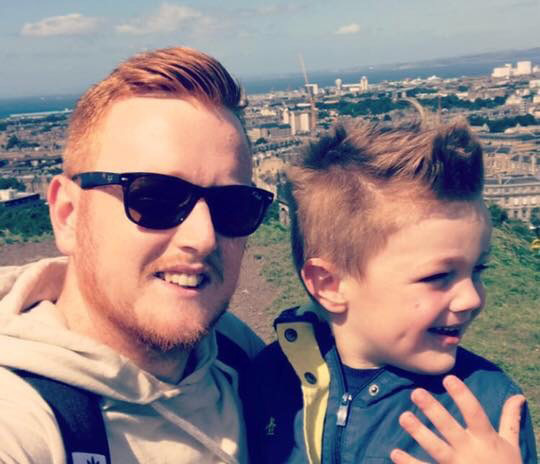 Andy pedals from Scotland to Shannon for autism awareness