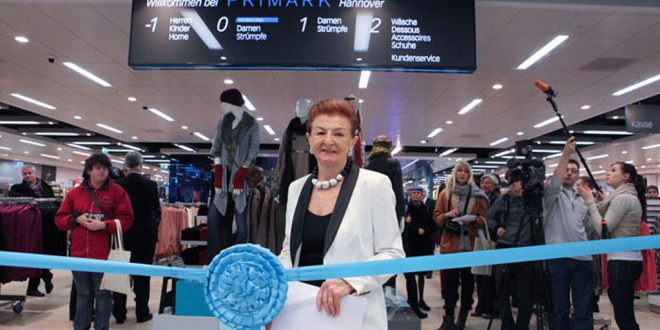 A North Clare business-woman, who has been at the fore of the international success of retail chain Penneys, is to retire after 37 years.

Boston’s Breege O’Donoghue is group director of new markets and business development with Primark Stores and will continue in the role until September. However, the company confirmed on Monday that the Clare woman will retire later this year.

Ms O’Donoghue was educated by the sisters of Mercy in Gort before going to night classes and graduating from University College Dublin with a degree in commerce in 1972. Over the course of her career, she completed many short programmes of study including at Cornell University, Harvard Business School, London School of Economics and International Language Schools in Germany, Spain and France.

Ms O’Donoghue began her career in hotel management with the Great Southern Hotel Group, before leaving to set up Penneys’ human resources department in 1979 and working as a board member to develop the Primark brand as a key player in the youth fashion market.

When she joined the company, Primark had just 24 stores. Today, it has more than 300 stores, operates in 11 countries and has some 60,000 employees.

In recent times, Ms O’Donoghue has spearheaded the company’s launches in the United States and Italy. She will step down from her role on the executive board of Primark at the end of the financial year in September.  She will continue to represent the company by performing duties as an ambassador, including her role as a pension trustee.

Paul Marchant, chief executive of Primark Stores, said, “Breege was part of the Primark board that led the transformation of the company into one of the fastest-growing and most successful retailers in Europe.
Breege developed and ran our human resources department, as well as having many other operational responsibilities. I would personally like to thank Breege for her contribution which has without doubt helped significantly to make Primark the business that it is today. We wish Breege all the very best for the future.”

Ms O’Donoghue has been presented with multiple awards and accolades over her career and was recently named Chevalier de la Légion d’Honneur by French Ambassador to Ireland, Jean-Pierre Thébault.