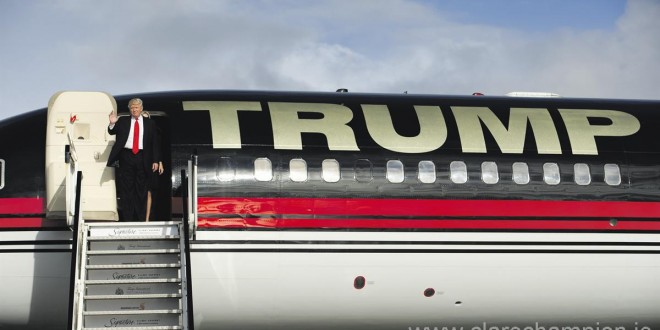 IT may be local and European election time here, but Donald Trump has higher aspirations. He has not ruled out running for the US Presidency in 2016.
“I have great love for our country. Our country has not been doing very well. Our leadership has not been extremely strong, to put it mildly. So we’ll see what happens. We have very big elections coming up in November and then after that people will be making decisions. So we’ll see what happens. But the elections in November will be very, very interesting,” he said at the press conference. Donald Trump said that he intends to work closely with local people. He claimed that he was warmly welcomed in Aberdeen and pointed to that as an example of how local communities embrace him.
“We’ll be working very strongly with the community. I always do. One of the little known secrets is that, in Aberdeen as an example, they did a poll and I have a 93% approval rating in town.
There was a big protest scheduled in Aberdeen when I arrived. It was two people and a dog. Then you had many other people saying ‘we love Trump, we love Trump,’ but the only people they showed in the newspaper was the dog and these two people. They love me in Scotland because of the job we’ve done,” he stated.
Towards the end of the question and answer session, Mr Trump predicted that Doonbeg would be viewed as an “iconic” resort.
“It’s only a development that’s going to be iconic that we have interest in. I don’t have enough time left to do the boring ones. This is one of those that can be truly iconic. This is going to be something that Ireland will be extremely proud of,” he stated, adding that the golf course would also be improved significantly.
“As you know the course was very good but they never got to use the good land because they had certain environmental problems that didn’t allow them to use the good land. Hopefully we will be able to use the main land the way it should be used and do something that will be as good as anything there is anywhere in the world. We think that’s going to happen,” he smiled.

Previous €14.7m in rural funding on hold
Next €80,000 upgrade at Kilrush District Hospital