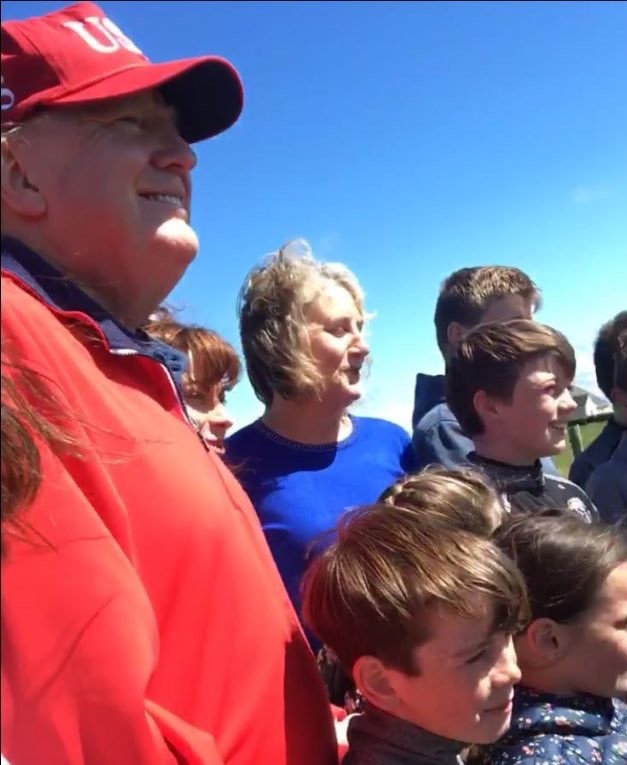 PUPILS and staff of Clohanes National School met with President Donald Trump this morning, as he played the ninth hole at Doonbeg.

School principal Aideen O’Mahony brought the children to her family’s land adjacent to the golf course, but only expected they would see the President’s group playing, not that they would get to speak to the American leader.
“We brought the children back to the hill, just near the ninth green. My parents home is there, so we brought them there and we were standing on a hill on my parents land. We could see them coming up along the ninth fairway and he played the ninth green. Then one of the Secret Service came over to us and said the President wanted to meet the teachers. We went over and met him and shook hands, he said can I get the children here, and then he said, no, I’ll go to them. He walked over to them, shook hands to all of them, he stood, there were photographs and we sang a verse of a song for him. There were lots of photos and videos taken! We’re super excited, they’re all chilling on the hillside now after it,” she told the Clare Champion, just minutes after the encounter.

The school has 27 pupils and all in attendance on the day, from junior infants to sixth class were on the excursion, along with four staff and members of Ms O’Mahony’s family.

She said that Mr Trump had been very nice to the youngsters and urged them to behave well at school.

It caps a fantastic week for the children, Ms O’Mahony concluded. “They’ve had a brilliant day. Just to mention An Garda Siochána, they were so good to us this week, they brought in the dog unit, the mounted unit, we had the armed unit, the riot unit, they all came to the school and did displays for the children, they were just so good. The children have had an amazing week.”

Owen Ryan has been a journalist with the Clare Champion since 2007, having previously worked for a number of other regional titles in Limerick, Galway and Cork.
Previous Hopes high that First Lady will visit Doonbeg NS
Next “It was so surreal”- Doonbeg youngsters on meeting Trump