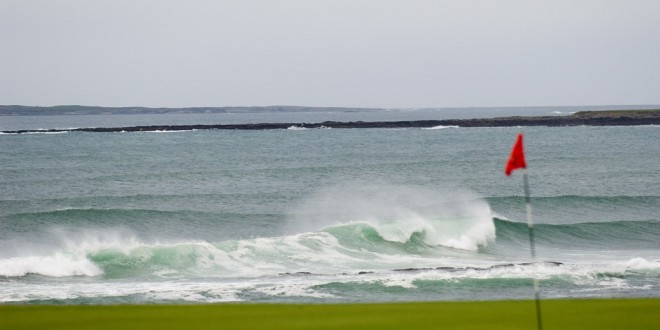 IN a submission to Clare County Council, relating to the further information supplied to the local authority by Trump International Golf Links regarding their planning application for coastal erosion management works, An Taisce claims that the information has not adequately addressed the ecological issues with the application.

Clare County Council is due to give a decision on December 21 on the planning application, which seeks to obtain permission to construct coastal projection works on Doughmore Beach. In recent years, the resort has been hit by a number of instances of flooding.

“This is largely because they are erroneously conflating the erosion of the dune frontage, as a result of the golf course stopping the dunes’ movement with the natural erosion associated with normal dune dynamics. That, in turn, has led them to claim that the do-nothing scenario will be ‘profoundly detrimental’ to the dune habitats. So the premise of all of their arguments, that the proposed walls will help the dunes, is incorrect. Therefore, An Taisce’s initial concerns about the impact of the proposal on the habitats and species protected by the Carrowmore Dunes SAC still stand,” An Taisce claimed.

In April of this year, 300 people attended a public meeting in Doonbeg Hall, in support of Trump International Doonbeg plans to erect protective coastal erosion works on Doughmore beach, next to the golf club.

The meeting was chaired by Gearóid Williams and attended by a number of county councillors. The meeting was organised by Doughmore Coastal Protection Group.

“It isn’t just a Doonbeg or Doughmore problem. The whole of West Clare needs the business. It’s a tourism area. Protection of the course is extremely necessary and the positive attitude of the attendance was unbelievable,” committee member Liam Ryan said at the time.

“It’s now time for the planning authority in Clare to make a decision and not to put it off and leave it in somebody else’s hands. We need less negativity and more positivity. Rural Ireland has been forgotten. It’s extremely important that people stand up. We’re only 300 miles long and 150 miles wide. If the powers in Ireland can’t make a decision to spread business around and keep our schools, post offices and businesses operating, there is something wrong with the country,” Mr Ryan added.

An Taisce has queried further information given by Trump International in delation to the planning application for costal works.
Previous Court gives €49k to charities
Next New Bishop of Galway appointed