Despite contingency measures by the club officials in watering the coursing stretch at Moher, the hard going robbed Liscannor of some of the big named runners, particularly in the featured all-aged stakes at the weekend.  However, there was some consolation for the promoting club when both trial stake winners came from the Banner County.
The Clohessy brothers from Killimer, Anthony and Denis, great supporters of the game, sent out Scattery Express (Matt Hyland-Scattery Mac) to credit the Scattery Syndicate, which also includes their relations Anthony and Bridget McNamara, with the Oaks ticket.
An even money favourite on Sunday morning, Scattery Express hardened in the market after eliminating Ted Molholland and John Scully’s Margarets Castle (Wilton Time-Evesham Star) by three quarters of a length in a semi-final run in which there was no turn.
A 2/1 on shot for the final, Scattery Express quickly took command against Fishermans Jade (Matt Hyland-Fishermans Lucky), owned by Leah Harte from Kilkee, and as they met the rising ground, Scattery Express pulled clear to have a four lengths advantage at the turn.
An equally impressive winner in the Derby was Upsetter, owned by Paddy Meade from nearby Glendine, Miltown Malbay.
However, there was nothing upsetting in the form of the son of Matt Hyland-Croca Or who justified favouritism and always looked the part when winning all his courses in great style.
He led Dromelihy Hyland (Mat Hyland-Cudham Specks), owned by Denis Browne from Cree, three lengths to the turn in the semi-final and opened up a similar margin when defeating No Fool (Matt Hyland-Three Fools), owned by Áine Dillon and her brother, John Reidy from Cooraclare in the final.
In the featured cup events, Flow on Ted (Bexhill Eoin-Caoimhes Cindy), which had shown promising form as a pup when running up for a trial stake in New Ross, delivered on that potential for Cork trainer Barry Lynch when winning the McDonagh Memorial All-Ages stake.
Installed as money on favourite after his semi-final run, Flow On Ted, owned in Manchester by Stevie Dobie and Graham Thomson, never gave his connections the slightest bit of anxiety as he took command of the course from slips and raced clear to take the turn by three lengths.
Indeed, it was a case of déjá vu for Pat McKenna who had to be content, for the second year running, with the runners-up spot with Whietstone Rover (Trajectory–Wake Up Kate).  He overlooked his local Kilflynn meeting in preference for Liscannor and like 12 months ago, he met one better.
Flow On Ted’s task was made all the easier by the decision of Moonard trainer, Pat Curtin against running his Derby quarter-finalist King Saunders (Droopy’s Saunders-Fiery Mary). Last year’s Charleville trail stake winner Soundmanpaddy (Mounteden Guest-Caoimhes Dilemma) who was an absentee on Sunday morning.
In the bitch equivalent there was a popular local success with the victory of  Bejo Blonde, owned by John Joe and Bernadette Carey in Liscannor, in the Clahane Stake.
Luck was on the side of this daughter of Matt Hyland- Classic Blonde in that she ran on to get the flag in her semi-final run and her opponent Glanmore Steffi (Droopy’s Caesar-Fire of Inagh), owned by Tom Mulcahy from Charleville, was in front but propped as she neared the escape in a course in which there was no turn.
Then, in the final, against Pumpkin Lucky (Ashmore View-Pumpkin Heresay), which is owned by Marie Thompson in Abbeyfeale, the loser went off line when in front. But Bejo Blonde deservedly got the flag as she was always on the line of the hare.
Kilkee owners Mary Harte and Damien Haugh picked up the puppy stake with their reserve runner Blue Hyland, a litter sister to the Oaks runner-up.
Blue Hyland eliminated Speedy Pat (Trajectory-Baby Rebecca), owned by Padraig Fanning of Ennis, in the semi-final. Both dogs were wide apart from slips and Blue Hyland got in for a wrench in front of the escape.
In the final, the winner had a length in hand of Kingtone Jamie (Janey MacAroo-Emmet Street Girl) which is owned by Paul King from Clogheen in Tipperary.
The members stake was won in impressive fashion by Liscannor Hero (Galway Mark-Drama Lass) for owners Ciara Malone and Róisín Mahony from Caherbarna, Liscannor.
Hero powered to a three lengths success against the bitch Kinnielty Spice (Brett Lee-Inagh Spice), owned by Declan and Terry McDonagh, which has broken 29 seconds around the College Road track in Galway over 525. 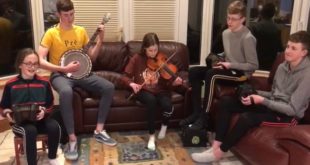