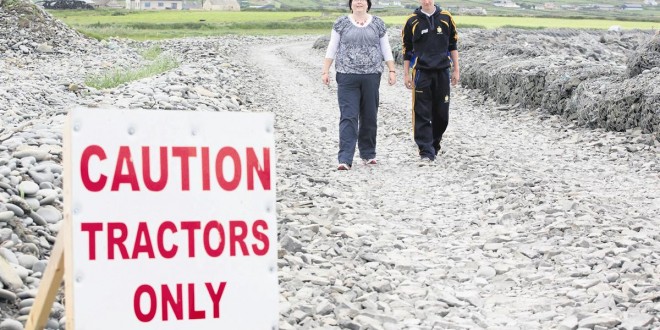 A ‘tractors only’ sign is still greeting tourists and local residents who want to use an important link road on the Loop Head Peninsula. Frustration is growing among householders living on the Ross Road, which connects the Loop Head Lighthouse with the Bridges of Ross, over the delay in making this route passable for cars.

Despite numerous pledges from local politicians that this road would be repaired before the Local Elections on May 24 last, Clare County Council will not be in a position to start work until July 7.

The roads at Ross Bay and Rinevella were extensively damaged during the January and February storms, when coastal protection gabions were washed up during extreme weather conditions.
While the works at Rinevella will not start until September or October, the council has pledged to carry out temporary repairs to this road in the meantime.
A sign stating ‘Suitable only for tractors’ was erected by Clare County Council in February, to warn motorists of the condition of the road.

Area engineer, Cyril Feeney explained the council has delayed carrying out work on this and the coast road between Carrigaholt and Kilbaha at Rinevella until the February storm funding allocation was announced by central government.

“In that way, the council could produce a fully-resourced programme of coastal defence repairs, followed by the road infrastructure repairs. As this announcement has not yet been made, the council has taken the decision to add the roads at Ross and Rinvella to its roads programme,” he said.

Describing the delay as “ridiculous”, local farmer, Shane O’Callaghan, who lives on this road, said residents would be happy if some temporary resurfacing works were undertaken, to open the road properly before funding is secured for major works.

Mr O’Callaghan believes there has been “tractor-only” access since the middle of March, which is causing huge inconvenience for locals and visitors. “We should not have to wait this long. All we want is to make the road passable at this stage. No one is looking for a major repair job now. I wouldn’t travel on the road with my car because it could be damaged. People who can’t use this road face the prospect of an extra eight miles of a round-trip. I have yet to see a tourist driving a tractor,” he said.

While Loop Head tourism chairman, Cillian Murphy, understands the frustration of local residents and acknowledges tourism is suffering because of the lack of proper access to attractions such as the Bridges of Ross, he believes it would be counterproductive to do a temporary job.

Instead, Mr Murphy wants the council to do a major repair job, in compliance with the stringent environmental and other regulations.

Local resident, Yvonne McNamara described the ongoing delay as very frustrating for residents, who were being given different dates for the start of work on the road. Ms McNamara has seen visiting cyclists being forced to carry their bikes over the rocky surface because it wasn’t safe to cycle, while parents can’t bring a buggy on this route.

She also expressed disappointment over the loss of tourism, as some tourists who wanted to stop off in the Bridges of Ross turned back when they saw the state of the roads. “I don’t want to send tourists over the road but where else am I going to send them? If I send them a different road, they’re going to get lost and they’ll be lost to the area. They won’t see the Bridges of Ross.

“Tourists are effectively being told ‘don’t go this road, go another route’, which is adding eight or 10 miles extra, whereas you could do the journey two or miles straight as the crow flies,” she said.

Marcella O’Callaghan, who is married to Shane, confirmed that a secondary school bus had stopped using this road to avoid damaging new tyres. This had resulted in an additional trip of over two kilometres, morning and evening, for parents who had to drop off their children to meet the bus.

If the road was made passable, Ms O’Callaghan said, the council could have erected a slow sign. She expressed disappointment over the number of tourists in campervans who have turned back once they established they couldn’t travel on this road.

“People in the local community are getting very angry and frustrated,” she said.