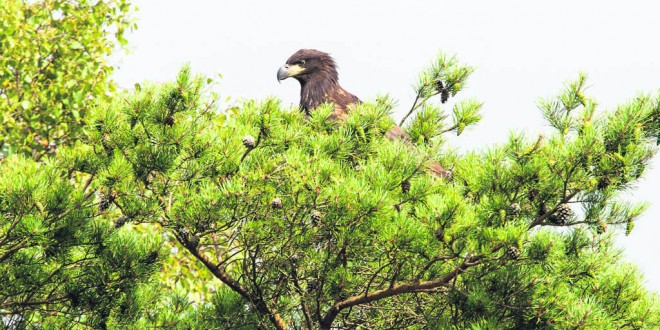 A white-tailed sea eagle chick sitting on its perch on Cribby Island, Lough Derg in 2014. Photograph by Arthur Ellis

THE local economy benefitted from more than €519,000 thanks to another highly successful summer, with visitors converging in large numbers in Mountshannon to see the successful breeding pair of White-tailed Sea Eagles.

Last year an estimated 10,000 people were recorded as having visited the amenity over a 10-week period from July 1 to mid-September.
Ms McGuire said they are “very happy” with the number of visitors who are coming to the East Clare tourist attraction.

Two Fás workers were employed at the viewing and information point during the summer, while two gateway workers and many volunteers maintained and kept the centre running.

Visitors were able to benefit from a viewing area equipped with binoculars, telescopes and the assistance of staff and wildlife enthusiasts up until early-September.

Ms McGuire said they are confident that 9,000 people had visited this year but she added they have to wait on those figures. “Last year we know 10,000 people visited. We are taking conservative figures and minimum estimates,” she said.

“We are very happy and we are very thankful to the local community who have managed to sustain the viewing point and the information point.”

Ms McGuire said she believes there may be a reason for the slight reduction in visitor numbers this year.

“There wasn’t the same amount of media publicity and there are more chicks around the country. The hype calmed down but still we had a very decent amount of people coming based on our viewing and information point,” she noted.

In early-June the hatching of a sea eagle near Mountshannon was greeted with excitement locally and Ms McGuire said the chick is “doing well”.

The white-tailed eagle pair Caimin and Saoirse hatched on an island close to Mountshannon for the third consecutive year. The pair of eagles created history in 2013 when they reared the first chick to fly from a nest in Ireland in more than 100 years.

The Clare heritage officer said James Leonard of Mountshannon Community Council and the local community had played an integral part in the continued success of the White-tailed Sea Eagle Viewing and Information Point.

Mr Leonard acknowledged Clare County Council for providing the viewing and information point which he said is a “very important” benefit.

He said, overall, it was another successful summer but that bad weather had also played a part in the lower visitor numbers.

“On Sundays we would have had anything up to 200 people especially if the day was fine,” he said. “You’d expect with the viewing point open longer there would be more visitors but the weather was so bad we didn’t get them.”

Mr Leonard said he would have a meeting with Clare County Council director of services Ger Dollard and Ms McGuire in November to go through the figures and evaluate the season.

A visitor survey, which was completed by 60 visitors, revealed that 22% said their primary reason for coming to Mountshannon was to see the eagles, which generated €118,200.

Scenery was listed by 16% of respondents as their primary reason for visiting and this generated revenue of €71,200. 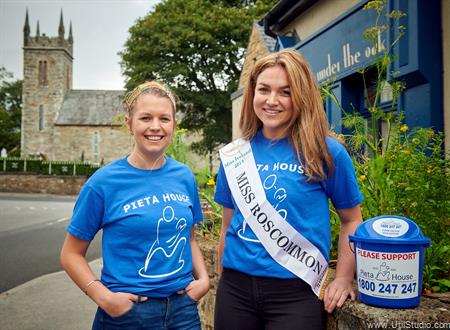