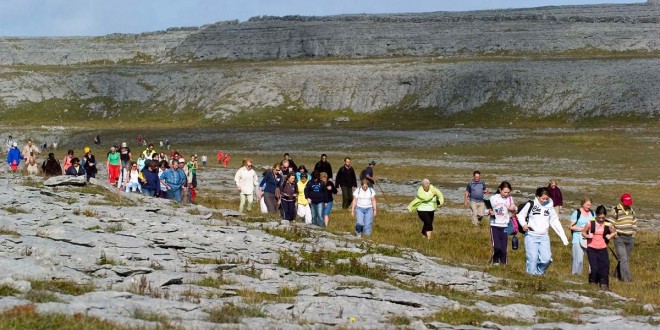 Trekking through the Burren. Photograph by John Kelly

The Burren and Cliffs of Moher Geopark has been named in the longlist for the 2014 World Responsible Tourism Awards for the second year running.

Over 200 tourism organisations, initiatives and businesses from throughout
the world have been selected for the next stage of the Awards across 11
categories.

The Geopark features in the ‘Best Destination’ category and is one of 20
destinations that were chosen from hundreds of entries. Other named
destinations in the same category include The Lake District in Cumbria (UK),
Arizona (USA), Reykjavik, Cyprus, Guatemala, V&A Waterfront in Cape Town
(South Africa), Aruba, Pahuatlan (Mexico) and Colorado (USA).

Sponsored by the Sultanate of Oman Ministry of Tourism and hosted by
responsibletravel.com and ICRT (International Centre for Responsible
Tourism), the World Responsible Tourism Awards the most exciting and
enduring responsible holiday experiences in the world.

The Burren and Cliffs of Moher Geopark will be seeking to make this year’s
shortlist for a second consecutive year when it is announced at the end of
August.

Speaking about the longlist, Justin Francis, founder of the awards and
managing director of responsibletravel.com, said, “At this stage of the
awards we don’t know enough about the longlist to decide the winners, but
we’ve had just enough of a taste to get excited about the possibilities. The
organisations selected from public nomination each represent very different,
in some cases competing, approaches to responsible tourism. Looking through
that list should give a distinct flavour of the trends and new developments
in responsible tourism.”