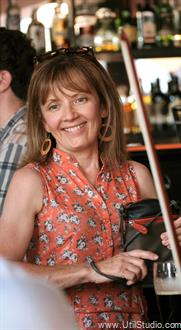 A TOONAGH native living in Melbourne has been getting behind the relief efforts for victims of wildfires, by lending her musical talents in a series of fund-raisers at one of the city’s most popular venues for members of the Irish community.

Concertina player Cathy Custy also succeeded in harnessing the goodwill and the musical talent of fellow traditional musicians, including her brother, the fiddler player Tola Custy. The duo were joined for the first in a series of fund-raising gigs at the hugely popular venue, The Last Jar, by Pat Hunt, Maggie Carty, Mairtin Staunton, Mairead Hannan, Chris Fitzgerald and Ado Barker on January 18. The event was live-streamed to a huge audience with donations pouring in for the County Fire Authority.

Follow-up gigs taking place next month will raise funds for communities worst affected by the fires which have been raging in drought-striken regions of the Australian continent for months.

Cathy, a family therapist, has been living in the antipodes for two decades, most recently in Melbourne, where she and her husband Mark have been active on the traditional music scene, both playing the concertina. The plight of those affected by the fires moved Cathy to lend her support to the relief efforts, particularly as the government response has been widely perceived as ineffective.

“People are so angry,” Cathy said. “First all about the delay in the response from the government. There were slow to act in the first play and the pace of the response has been very slow. People are very critical of the prime minister.”

Scott Morrison’s determination to proceed with a fireworks display on New Year’s Eve in Sydney also proved highly controversial, something that was not lost on Cathy and her family. “We were in Sydney at Christmas and on New Year’s Eve, the kids were going to get to stay up and go to the fireworks, but we decided as a family to boycott the event. We had been very excited, but this year we decided on principal that fireworks weren’t a good idea when so many people were traumatised by fire. We signed the petition against them. The kids were brilliant, they’re said: ‘We’re not going, it would be a terrible things to do’. So, they’re very aware of the fires and the issues around them.”

Cathy added that while the fires are distant from Melbourne, there are constant reminders and it’s something she and her husband have had to shield their children, Joseph (14) and Grace (10) from: “We have tried to limit the amount of news and images they see of the fires, it’s very distressing, but they’re very much aware of it. The smoke is a constant reminder of what’s going on. We can go outdoors, but have to limit what we can do and how long we can be outside for, especially for the kids.”

The sight of long lines of traffic as evacuees flee is another reminder of the suffering inflicted by the fires: “On the way back from Sydney, we drove and we saw an awful lot of the people who were evacuated on the roads – the amount of vans and camper vans was just staggering.”

Other members of Cathy’s family including her 91-year-old father-in-law have witnessed bushfire seasons down the years, but nothing like this one: “My father-in-law spent his life in the country and said that he’s seen fires before, but that this is something different altogether.”

The scale of the current crisis prompted Cathy to put aside any fear of performing in public and get involved in fund-raising efforts: “I’ve never done anything like this in my life. We made a video and it took seven takes to get it right. It’s terrifying, but then I thought that’s ridiculous when you think of the people who have been so badly affected by the fire.”

More details on how to support the fund-raising efforts are available on the Facebook page of The Last Jar, Melbourne.

Fiona McGarry joined The Clare Champion as a reporter after a four-year stint as producer of Morning Focus on Clare FM. Prior to that she worked for various radio, print and online titles, including Newstalk, Maximum Media and The Tuam Herald. Fiona’s media career began in her native Mayo when she joined Midwest Radio. She is the maker of a number of radio documentaries, funded by the Broadcasting Authority of Ireland (BAI). She has also availed of the Simon Cumbers Media Fund to report on development issues supported by Irish Aid in Haiti. She won a Justice Media Award for a short radio series on the work of Bedford Row Project, which supports prisoners and families in the Mid-West. Fiona also teaches on the Journalism programmes at NUI Galway. If you have a story and would like to get in touch with Fiona you can email her at fmcgarry@clarechampion.ie or telephone 065 6864146.
Previous Seasoned Campaigner Dooley Takes to the Streets of Ennis
Next Bugler Confident St Flannan’s Are Ready For Battle In Harty Cup Semi-Final