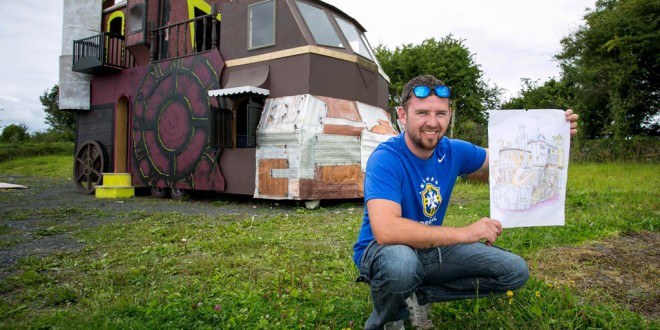 Shannon artist Seamus Scullion will be bringing his installation The Old Octopus Medicine Show to the Electric Picnic festival which is on from August 29-31 in Stradbally, County Laois.

His proposal won the Art Caravan Competition and organisers described his concept as “a quirky, eccentric time machine full of magic, mystery, fairy lights and trampoline teepee’s. It will be an area where Picnickers can chill out, listen to music and enjoy some crazy art and quirkiness. Not only can you expect a unique mind-blowing atmosphere, there will be shots of miraculous elixir distributed as a prize on our wheel of misfortune along with some torture (just to balance things out)”

Seamus said he and a number of others worked on the project at his sisters house for about three months and he was quite happy with what they built. “There was an advertisement for a trailer park in Electric Picnic and I put a submission in. We won the first prize grant for it. We went ahead and done it, it’s been hard, but it really does look like what we set out to make. I think it even looks better than the original drawing. It’s very cartoon-y, very original as well, I don’t think you’ll see anything else like this.”

The piece is very large, he added. “It was built from a 23 foot caravan, we fabricated it and extended it. It’s about 24 foot in height now and 23 foot in length. It’s a monster of a yoke!”

He was at the Burning Man festival in Nevada, which fired his creative juices, ultimately leading to the Old Octopus Medicine Show. “When I went to Burning Man that kind of inspired me to do some installations when I came back to Ireland. I built a temple in November for Decompression festival, it was called the Temple of Miracles and I did it straight away after I came back from America. That went really well, everyone loved it so we decided we’d do something else. There was an advertisement for a trailer park at Electric Picnic. I put a submission in and we won the first prize grant for it.”

He says that after Electric Picnic is over he hopes to bring his creation to a few other Irish festivals.