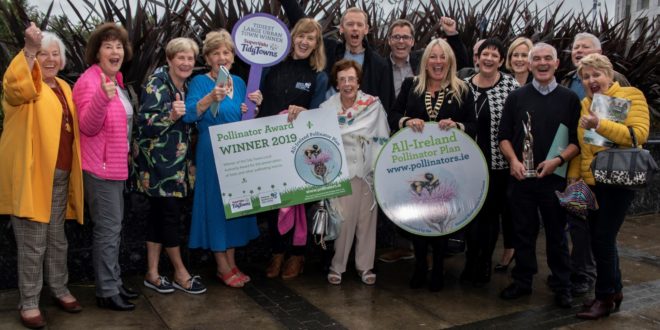 THE national Tidy Towns competitions may be cancelled, but that hasn’t stopped the dedicated band of volunteers who have been keeping Ennis looking its best all year round.
Just one of a number of initiatives underway locally has seen Ennis Tidy Towns join forces with the little ninjas of Ennis Coderdojo, asking them to develop Tidy Towns themed games and apps. The local Tidy Towns committee are looking forward to adjudicating what the youngsters come up with later this month.
“If we don’t have actual Tidy Towns, we have virtual Tidy Towns,” smiles chairman of Ennis Tidy Towns Cormac McCarthy.
He admits that there was disappointment in the community when it was announced this year’s contest would not be going ahead. The Ennis team, who have been hugely successful in the national contest, put in a “very strong submission” this year having worked right through the year.
However, Cormac believes it was the right decision given the current Covid-19 crisis.
“A lot of people are very upset about it, I’m sure around the county as well as in Ennis. But in Tidy Towns the competition is always the cherry on the cake. We would be doing this anyway even if there wasn’t a competition. First and foremost our focus is on making the community we live in a better place for people to live, and to create a better environment. After that, the competition, really is kind of secondary. If you look at last year, they had about 920 entrants and only a really small percentage of that amount get a prize or get a medal. That’s testament to show that Tiny Towns groups really do it for the sake of the good they’re doing, as opposed to the possibility of winning prizes.”
The Ennis Tidy Towns group are following government restrictions, with no public litter picks or similar events planned at the moment. Before the current restrictions were put in place the Tidy Towns put a call out to the public asking if they wanted litter pickers or bags and they were delighted with the response.
“We got an amazing take up and we were really we were blown away. We handed out at least a dozen litter pickers and rolls of bags to people who just wanted to do something for the community during this weird time. When the restrictions were heightened, we just said look we needed to fall in line with everything else so we still have the names of people who came looking for the equipment and we have told them we will be more than happy to give it to them, but we are going to wait and see what happens after May 5.”
The restrictions have brought their own set of challenges, but nothing the volunteers cannot rise to.
“We’re basically trying to change how we do things, no more than any company or any other community group. We’re trying to do as much stuff remotely as possible.
This is great thing about Tidy Towns, it’s a very diverse competition and we’re used to doing things with very limited budgets and in very different ways for maximum impact. So I suppose Coronavirus is just an extension of the way we approach things anyway. We’re still being very active.”
As well as working with the Coderdojo, other activities for the Tidy Towns include restarting their swift nesting units at Ennis Courthouse. They have also developed an on-line colouring competition for children, with prizes including Ennis Gold vouchers. “At least when all this is over we have prizes out there that will help support local business.” They are continuing to work with the Ennis Municipal District on pollinator management, with a number of new sites added this year.
There are also plans for the future. “We had a number of projects that were ready to go. All the preparation has been done so when the restrictions are lifted they will roll out. They involve working with local artists, the Brothers of Charity and local schools. We had received a grant to develop digital media features with Ennis Community College on waste prevention. While that was meant to happen in April, we will now just postpone that and we’ll do it come autumn when the kids are back in school.”
He believes that the decision to cancel the national competition presents an opportunity not just for the Ennis group but others throughout the county.
“This is a time to take a step back, begin to look at projects and develop new projects. We would really encourage people if they’ve seen anything that Ennis Tidy Towns have done, it might be a time to get in contact with us and get a bit of dialogue going and get a bit of knowledge sharing. We now have a two year lead in to the next competition so either email info@ennistidytowns.com or get in touch on Facebook and Twitter. Let’s get a conversation going with community groups and communities around Clare, because first and foremost this is about improving our local communities.”