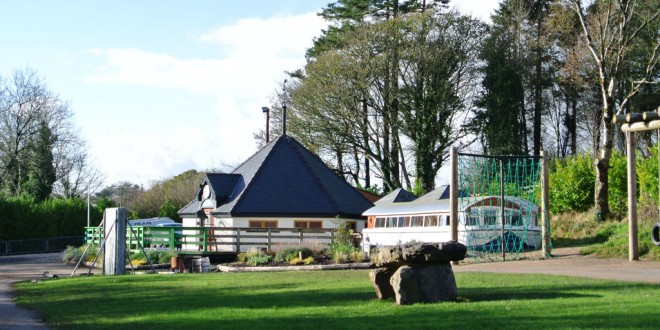 The Celtic hut at the team building complex.

Thinking Outside the Box in East Clare

Signs of economic green shoots may be showing in the big cities and larger urban towns but in East Clare, the recovery is not yet being felt and locals here are doing their best to make ends meet by thinking outside of the box.

One such family-run business, which was set up during the recession, is expanding nicely. Based on the Mountshannon Road in Scariff, Padraig and Anne Giblin set up Derg Isle Team Building Centre in January 2013 with two part-time staff. Now, however, it has between five to 10 part-time staff on its books and has created spin-off employment in construction, as well as business for local eateries and hostels.

With over 50 groups already through its doors since opening, Derg Isle has been attracting visitors from across the island of Ireland but it is now looking towards the global market.

Padraig Giblin outlined to The Clare Champion how the idea came about and his hopes for the future.
“We’ve been fishing for years but this was about trying to do something different. What we found was once the May fly is over, it’s like a light switch going out with people and with the movement of people. In May, we’d have a good flow of anglers but June, July and August were very inactive months, so we then decided to try to diversify using our natural resources and the boats to suit another market,” he said.

The centre is a year-round business but it took a lot of thinking outside of the box, according to the Scariff man.

“I think the upturn has arrived and I can see it in Dublin. It still hasn’t kicked off in East Clare but it is coming, I’d say. We have to keep diversifying. We’re trying to make land work in different ways and find potential. There are loads of opportunities out there. We are just going to try to do what we can with what we have, for instance, we have wet land here where you couldn’t put out an animal but we’re going to use it in a different way. It’s a family-run business and I’ve three young girls. One of them might do fitness and it might stop one of them going to the airport. It’s really about trying to lay down a foundation for someone here,” he said.

Franci Corbett from Scariff, who has a managerial role at the centre, outlined what the business has to offer and how it has developed.

“We are a team building and personal development centre. In January 2013, Padraig’s focus was on sports teams and the GAA, to bring a team in for a day of team building. We offer them something outside of their actual skills in their sport. They work on their communication and the team’s strengths and weaknesses. That was the start and then it grew. We realised there were other markets. We didn’t do any marketing, it was just by word of mouth and it started to spread towards corporate, to youth groups, schools, scouts and we just adapted and developed the programme to cater to more diverse groups,” she said.

The centre tailors packages to suit own skill levels of individual groups, be it a sports group, transition year students, or an office-based company.

“We’ve learned so much from it that we are building on the experience we had, but it is going to be forever progressing. There will be constant development on the site, bringing in new activities and there is a lot more to do, as we have a lot of ideas and activities planned for the site,” she said.

Two trained army instructors, Fergus Barrett from Tuamgraney and Derek Dinan from Ennis, lead the groups. They ensure that personal development are to the forefront of the team building exercises they do, while putting participants in situations that are out of their comfort zones.

Lough Derg plays a large part too, with groups being taken out on the lake for activities. In some programmes, groups are brought out to an island overnight, where they must use taught lifeskills and survival techniques, like how to light a fire and how to keep warm.

As well as working with the corporate, sports and educational sectors, Derg Isle are also giving back and have been working with at-risk teens to help create a positive impact on vulnerable teenagers and young people.

“We do special overnight treks, where we take them out of their comfort completely, to try and make them better people. They’d be dropped across the river on a Friday morning and they’d have to go four or five miles to get back and they’d be sleeping under the stars. We would give them army rations and they are learning survival skills. We had two lads last year on a Youth Reach programme and one went on to join the navy and another went on to join the British army, so it helped them. It is about taking young people out of their comfort zone for their own personal development,” Padraig outlined.

As well as having local teams come to the centre, Derg Isle has also had the Galway U-21 team and a team from Newtownshandrum, Cork attend. It is now looking abroad for further business. Ladies are also coming to try out their skills at the centre and a number of women’s football and camogie teams have participated.

“We’re hoping to attract people from outside the country as well, through our rugby contacts and groups we know through fishing. There’s a big market there and the scouts and beavers are a great market too,” he said.

Accommodation is provided on site, using army-style tents and the centre also supports Loughnane’s Hostel in Feakle for accommodating larger groups. Catering is also spread out among various local eateries to ensure this business stays local.

Looking to the year ahead, the business is looking to primary and secondary schools and youth groups, sports clubs, and the corporate sector for its team building days.

Encouraged by the positive reactions to date and the growth in the business, it looks as though 2015 could be another bumper year for the Derg Isle.