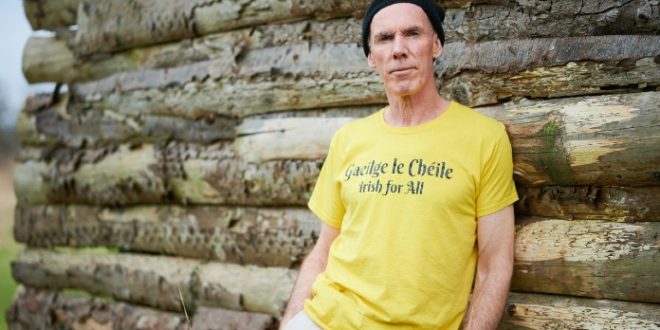 “WHEN it comes to learning Irish, everyone has a story,” according Michael McCaughan, Clare County Council’s first Irish Language Officer in six years. “It might be a generational thing, but people very often have baggage that needs to be unpacked. There are bad experiences someone might need to move beyond, not to mention the fact that after spending 14 years learning it in a classroom, we can hardly order a cup of coffee through Irish.”

As someone who is not a native speaker himself, Michael is uniquely positioned to understand the hurdles many face when it comes to using more Gaeilge, as well as the multitude of ways that people can enjoy and appreciate the language. His own story of “coming home” to Irish and choosing to live his life through that medium is likely to inspire many.

Michael left school with a fluency in French and Spanish, before “a kind of mixture of punk rock and a sense of adventure” sent him hurtling towards South America. After spending years reporting for The Irish Times from Mexico, the South Dublin native “through a series of fortunate events” found himself in the Burren, approaching middle age with a slow-burning curiosity about the language of his ancestors.

“At school, I’d done reasonably well in Irish, it wasn’t difficult for me, but it wasn’t a spoken language,” he explained. “It was learned for exams or whatever. I suppose I just got curious and thought, ‘How would you go about learning Irish, if you didn’t have neighbours who were fluent, if you weren’t living with someone who was, and didn’t have the advantages of immersion.’”

Michael’s answer was to began listening to Radió na Gaeltachta for three hours every day. Slowly, he began to decode the language: “Little by little, it was like unlocking a door, or pushing your way through it.”

Clare’s own Áine Hensey was among the presenters who particularly inspired him and sparked his interest: “I thought, ‘Here is someone who really speaks clearly and she’s not running away with herself in terms of what’s being said. Plus, she plays music and talks about who the musician or the singer is.” Presenter Rónán Mac Aodha Bhuí, who was later to interview Michael, was another big inspiration. The death notices, too, provided a rather more unlikely source of learning. “They’re a handy little thing when you’re learning,” Michael noted. “They’re on several times a day so there’s repetition, which is an element of learning. They follow a pattern with information about a person, their family, where they lived, and so on.”

Michael gradually developed his fluency, thanks to a lot of dedicated listening and a little sibling rivalry when his mathematician of an older brother also got in on the act. “He started to understand more than me. I was sufficiently annoyed by that, so it was another one of my motivations,” he joked.

Over time, Michael moved on from listening to RnaG to working for the station, using his expertise in South American affairs to report, as Gaeilge, from Nicaragua. After writing a series of articles and a book on his experience of learning Irish and investigating “the scene” for those living life through Irish (entitled Coming Home, One Man’s Return to the Irish Language), Michael found a debate had been sparked: “One article for The Journal produced what I would describe as a trigger response. Some people reacted as if I was trying to force the language on them. There’s a whole post colonial theory you could apply there, about how we’ve internalised shame.”

Now working to promote the Irish language across Clare, Michael sees huge potential in the county, with major assets like Coláiste Eoghain Uí Chomhraidhe’ in Carrigaholt, as well as a vibrant network of enthusiasts who welcome speakers of all levels to regular Comhrá  sessions.

Micheal also sees the North as a huge source of inspiration and hope: “What’s going on with the promotion of the language in the North of Ireland blew me away. It’s where I would send someone to learn Irish. Using Irish gives a sense of reclaiming  a part of yourself. It’s actually a part of our biology somewhere in time. It can be learned an spoken in a very enjoyable way. There are as many ways of learning as there are people. You might have to unpack the baggage first, but there is a way to find something that’s fun to do and won’t get you overstressed. There’s a healing in the Irish language.”

Fiona McGarry joined The Clare Champion as a reporter after a four-year stint as producer of Morning Focus on Clare FM. Prior to that she worked for various radio, print and online titles, including Newstalk, Maximum Media and The Tuam Herald. Fiona’s media career began in her native Mayo when she joined Midwest Radio. She is the maker of a number of radio documentaries, funded by the Broadcasting Authority of Ireland (BAI). She has also availed of the Simon Cumbers Media Fund to report on development issues supported by Irish Aid in Haiti. She won a Justice Media Award for a short radio series on the work of Bedford Row Project, which supports prisoners and families in the Mid-West. Fiona also teaches on the Journalism programmes at NUI Galway. If you have a story and would like to get in touch with Fiona you can email her at fmcgarry@clarechampion.ie or telephone 065 6864146.
Previous Positive Covid-19 Clare cases up to 54
Next new assessment unit for Covid-19 patients