Home » Regional » Ennis » The history of the Halfway House 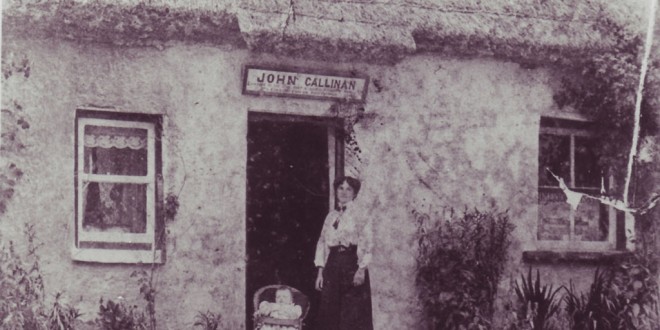 An early photograph of The Halfway House.

HISTORY will come alive in The Halfway this week, when a very special recording will take place. Peadar White, whose family have lived on the Clare Road for generations, will be detailing a verbal history of both the Clare Road and The Halfway on this Friday night. He will be recorded, ensuring that the many stories of those who lived and worked in the area over the years will not be forgotten by future generations.
Fittingly, the recording will take place at The Halfway and those visiting the venue at 8pm will get a chance to hear the historical stories firsthand.
“The whole idea for this came about when I was on walkabouts and I saw signs up saying such and such a pub was so old, and another pub was another age. I said to Frank, my brother, who owns The Halfway, how old is this place? And he said, you do the history and we will find out,” he recalled.
Peadar has worked with historical societies in Ennis over the past few months. However, much of the history he has put together has come from his own memory.
“I was born and reared at The Halfway. I remember the customers who used to come into the pub when we were kids and the stories about them. It’s all in the head. When my mother was alive – she was 94 when she died – she had a brilliant memory and I used to sit down with her and talk to her. She served in the pub and I remember the stories,” he said.
Peadar has traced his family’s connection to The Halfway as far back as the 1850s, using the Griffith Valuations. “My great-great-grandfather was a steam engineer, working the West Clare Railway, and my great-grandfather and grandfather also worked with the steam engines. The records show that John Callinan, my great-great-grandfather, was on the Clare Road back in 1850. That’s as far back as we have gone so far but we are working on going further back. A cousin of mine is looking into it to see who owned the pub before that.
“What we are doing on Friday will be the recording of a folklore history, remembering who came into the pub and the stories behind that. Ger Sweeney will act as compere, like an interview, and I will be telling the stories. That way, they will be there for future generations and not be forgotten. For instance, my mother told me a great story, where they ran out of lemonade one night and they sent the steam engine out to Corofin to get more lemonade. And no one was ever barred from the pub for more than 24 hours.”
While the oral history of the area is being recorded, Peadar has not ruled out the possibility of publishing a written history in the future. “It’s something I can see us doing some day. There are plenty of stories that’s for certain,” he said.