Home » Breaking News » The Clare weddings cancelled due to Covid-19 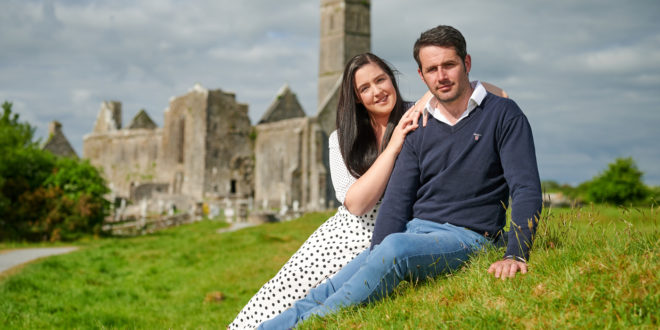 Amy Ryan and her fiancée Tommy Considine who have postponed their wedding date from 7th August To 18 June 2021. Photograph by John Kelly.

LONG planned weddings have had to be cancelled all over the county in recent months, much to the disappointment of those who had been all set to walk down the aisle.

Amy Ryan from Quin had been due to marry Tommy Considine from Clooney in August but now those plans have been put on ice. “In the grand scheme of things, it’s not the end of the world but you put a lot of effort into planning it and then it kind of goes up in smoke,” says Amy.

The couple have been together for nearly 11 years and she said that calling it off was the right option for them. “It’s gutting for everyone. We looked at what other people had done, getting married and Zoom and all that but we’re a bit traditional.”

Prior to a recent address from the Taoiseach, when proposed phases of reopening the country had been laid out, they had still planned to go ahead in a few months but have pushed it back until next summer now. “We already had plans for a second date and we were looking at Christmas time but listening to Leo speak, it made it clear to us that even then it wouldn’t be possible to have the day that we would like to have.

“So we made the call at that point not to even look at Christmas, so we have cancelled all the second stage plans and to be fair to the Inn at Dromoland, they have been unbelievable and we had a new date sorted within a couple of hours. We’re going for June 18, 2021.”

Although the couple grew up only a few miles from one another, they didn’t meet until they were adults and Amy was working at the venue the wedding is planned for. “I was working in the gym at the Clare Inn and he was a member. We just started chatting and it went from there.”

While the lockdown has interrupted their plans, it also made a sad moment more difficult for Amy, as her grandmother passed away. “That was rough too because we couldn’t have a proper funeral with the family.”

Emma Maher, another Quin woman, went ahead with her wedding on March 20 but plans to have a larger celebration once a greater level of normality is re-established.

Herself and her husband Michael had originally invited 250 people. “By Sunday, March 15, we had decided we couldn’t go ahead but we decided to still have the private ceremony. We didn’t want to look back on March 20 as the day we should have got married. We still wanted to get married, so we decided to just do the civil part of the ceremony and our priest agreed to it as well.”

Emma says she was extremely disappointed initially. “Oh, devastated! I was absolutely distraught. I was supposed to have all my appointments in the coming day and I couldn’t see past it but after having a chat with my sister, I realised it’d be lovely to go ahead and get married. I didn’t even wear my dress. We didn’t go down the suit route or anything; we kept it very simple and straightforward. And it was actually lovely.”

They now have a date in late September booked for a blessing of the marriage and a larger celebration but she says that could change again. “If any of the phases are prolonged or go backward, then it probably won’t go ahead either, so we have another provisional date of March next year. Whatever about having a plan A, I never thought we’d need a B or a C!”

A few weeks after the initial disappointment, she has a good perspective on the situation. “Even if we got married a week earlier, we could have been on our honeymoon and stuck somewhere. We wanted to get married, we chose each other for life and at the end of the day, a celebration can be put off to another time. I’m trying to look at it in a positive way. You’d be disappointed and upset but the main thing is everyone getting through this ok.”

Lisdoonvarna woman Philomena Kerin has been engaged to Rory Byrne for 12 years but the long wait was supposed to come to an end last month. “We decided we’d get married on April 3 and obviously just before it happened, we realised it wasn’t going to happen. “I emailed The Falls Hotel, who have been absolutely fantastic to us, and we picked July 10, thinking it’d be ok. “I’m emailing again now. We’re looking at April next year possibly,” she says.

While very disappointed initially, she laughs about the delay now. “We were gutted, gutted. But the main thing is that everybody is safe and we’ll just ride the storm out. What will be will be. We’ve waited this long now, we can wait another year!”

There are some positives about the postponement. “We had the hen and stag done. But sure we might have another one now!”

Wedding photographer Gary Collins is having a very unusual year and the after-effects will be felt into 2021. “I am in a position now where everything up until the first weekend in September has been postponed. We are lucky in the sense that most of our couples have been able to reschedule for later in the year or next year, so there is an impact over two years really, but we’ve been lucky that we can accommodate everyone. There is a group of 14 of us photographers between Clare and Limerick and we try to cover everybody.”

He says it can be quite stressful for the couples involved. “There’s definitely an element of stress. Wedding suppliers in general have been quite accommodating with everyone. “No-one has been in this position before, so it’s definitely an anxious time, trying to organise everything. Being on the west coast, I have a lot of international couples as well. Couples come back from Australia to get married at home and they are trying to organise everything from the other side of the world.”

He hopes things start to get back to normal within months. “I think on July 20, we’re able to start doing small ceremonies again, so we’d be hopeful that by August, it’d be relatively normal and September would be full swing again.”

Owen Ryan has been a journalist with the Clare Champion since 2007, having previously worked for a number of other regional titles in Limerick, Galway and Cork.
Previous Kilkee blacksmith diversifies in response to Covid-19 crisis
Next Chesser Chasing Funds For Sláinte An Chlair