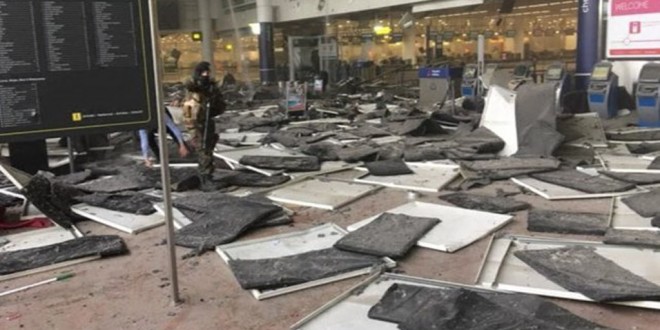 The scene at Brussels Airport after the explosion.

A terrorist attack on Brussels Airport and a  metro station after 8am local time this morning (Tuesday) has left at least 23 people dead and and a large number seriously injured.

The blasts at the airport and metro station have occurred four days after the arrest in Brussels of Saleh Abdeslam, prime suspect in the Paris terror attacks that killed 130 people in November.

Belgian police had been on alert for any reprisal action since then. But there has also been a high state of alert across Europe for fear of terrorist attacks by the so-called Islamic State, which claimed responsibility for the Paris attack.

This morning, there were two explosions at Brussels Airport and reports of shots being fired in what Belgian media said was a suicide attack. Thirteen people have died in this attack and a further 35 seriously injured.

A second blast struck a metro station, close to European Union institutions, in the capital shortly afterwards. Belgian public broadcaster VTM has reported ten dead in that explosion. Authorities have closed all metro stations in Brussels, and the transport authority has closed all public transport in the area.

The Department of Foreign Affairs has said people with concerns for Irish citizens can call +353 01 408 2000.

It said that any Irish citizens in Brussels or Belgium should exercise caution and follow the instructions of local authorities.