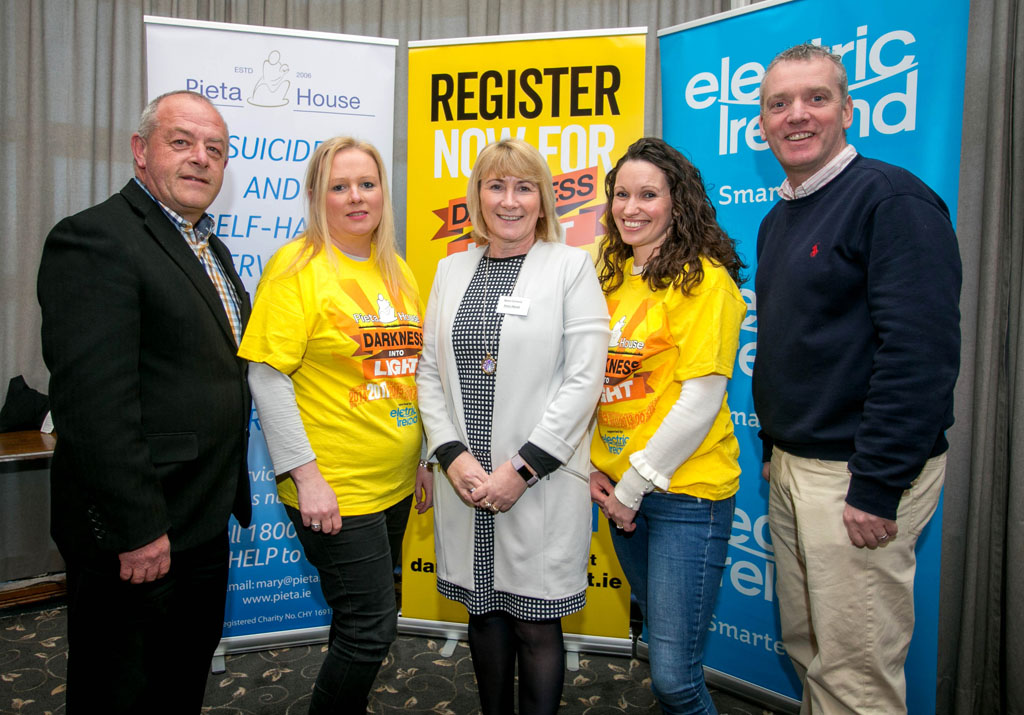 THE Clare launch of Darkness Into Light 2018 took place in Shannon this week, with walks set to take place in Doolin, Sixmilebridge, Killaloe-Ballina, Ennis and Shannon on May 12.

Nora Conway is clinical manager of the Pieta House Centre in Mungret and she says the event has grown dramatically, showing how people feel about removing any remaining stigma around mental health. “It’s the 10th anniversary of Darkness into Light and, I suppose, from the days when 100 or 150 people would come out, compared to 120,000 nationally, it’s phenomenal. I think it’s a statement, really, that the people of Ireland are making. A statement by coming together, walking shoulder to shoulder and doing what they can to lift the stigma around suicide and self-harm. The more we promote the service, the more we encourage people to ask for help, and the more that we say that it’s okay not to be okay, the better.

“I suppose the key to it is for someone not to carry a burden on their own, to share it. Share it, not just with Pieta House but with a friend or a loved one. In my 10 years involved with Pieta House, many, many times I have heard people say, even at the very first engagement, that just breaking the silence makes a difference. And that’s what we’re encouraging people to do – to speak out and ask for help.”

Speaking about the event in Clare, Ms Conway added, “We have five venues. We have Doolin, Sixmilebridge, Killaloe-Ballina, Ennis and Shannon, and that’s huge. It is phenomenal to see so many people involved and it’s throughout Ireland. It’s an annual event and it’s something that’s very important to an awful lot of people, families who have lost a loved one to suicide, people who know someone who has died by suicide, people who may be struggling, maybe people who have come through the service provided by Pieta House and who have benefited greatly from that service.”

The funding raised by Darkness Into Light and the awareness it generates are critical to Pieta House, which was founded 12 years ago by Joan Freeman. Ms Conway explained, “She would speak publicly about her own loss to suicide and the realisation that we needed to do something. She opened the first centre in Dublin in 2006. Limerick was the first centre outside of Dublin and that opened in 2010. Communities come together, they ask for a Pieta Centre, they raise the funds, they make it happen. Really and truly, it is owned by the people of Ireland now.”

With suicide a major problem in Ireland for years now, she pointed out that huge numbers are looking for help from Pieta House. “I don’t think there is a village or town in Ireland that has not been affected by suicide. We also do bereavement counselling and work with families bereaved by suicide. That’s a service that is badly needed. Nationally, last year, over 7,500 people engaged in the service. There is phenomenal demand for it.”

Speaking about what the charity offers, she said, “We make the referral pathway very simple. Somebody can ring and make an appointment for themselves or they can ask somebody to make an appointment on their behalf. They’re asked a few questions over the phone to determine whether our service is suitable. We arrange an assessment to determine the level of risk that person is at and we then engage them in therapy. We offer a maximum of 15 sessions of counselling – free of charge, of course – for people who are in crisis or self-harming. We offer in the region of 30 sessions to families bereaved by suicide. We see all age groups; we see children as young as six years of age to people in their 70s and beyond. We see people from all corners of society. That’s the reality of suicide.”

Ms Conway feels that making it easier for people to talk about issues around suicide is very important to reducing the figures. “I think it’s important that we have a lot of work done, in terms of opening up the conversation around suicide and self-harm. But we must do a lot more by way of lifting the stigma. That’s a huge part of our work now, lifting the stigma around suicide and self-harm. I think when we can achieve that, we will definitely achieve a reduction in deaths by suicide. One death by suicide is one too many and that’s the reality,” she concluded.

THE Clare launch of Darkness Into Light 2018 took place in Shannon this week.
Previous Under 21 honours for Bodyke and Crusheen-Tubber
Next The best is yet to come-Parker