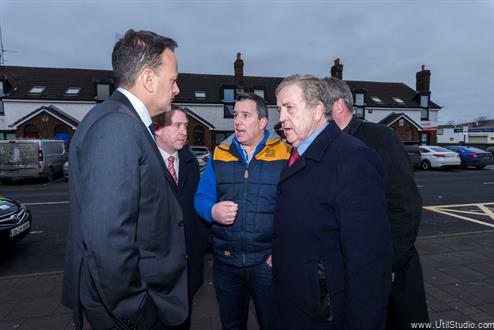 John Wall, an air-traffic controller at Shannon Airport and father-of-three, who has been diagnosed with terminal prostate cancer in conversation with An Taoiseach, Leo Varadkar, during his visit to Ennis on the final day of campaigning for the general election. Photograph by Eugene McCafferty on 07/02/2020

A TIGHT contest for Fine Gael to retain two seats in Clare was the prediction of Taoiseach Leo Varadkar as he took to the campaign trail in Ennis today (Friday). Flanked by candidates Pat Breen, Joe Carey and Martin Conway, the Taoiseach canvassed the town centre. While he was met with gifts – a green tie and a pair of socks – in one menswear outlet, he was challenged by students from Coláiste Mhuire on the issue of climate change and by members of Extinction Rebellion Clare.

In relation to the chances of retaining two Fine Gael seats in this constituency, the Taoiseach said nothing was being taken for granted and that canvassing would intensify over the final hours of the campaign. Responding to a question from The Clare Champion on whether or not the party would retain the two Clare seats, Mr Varadkar said: “I believe so, but we’re not taking anything for granted. That’s one of the reasons why I’m here today. It’s going to be a really tight contest. Clare is always really tight. It was tight to get the two seats in 2016, it’s going to  be very tight to hold the two here on this occasion, but we can do it. Clare is a constituency that throws up surprises. It has done in the past. I remember even in a difficult election for Fine Gael in 1987, we famously held the two seats. Our candidates all three of them, Martin [Conway], Pat [Breen] and Joe [Carey] are going to be campaigning until 10pm on Saturday night to convince as many people as possible in Clare to vote for our party and to give them the highest preference.”

The overcrowding at the Emergency Department of the region’s main hospital has been a source of increasing concern for voters, with some taking the opportunity along the Ennis canvas to raise the matter.

On the issue, the Taoiseach said nobody could be happy with overcrowding situation, but he defended the government’s track record, shifting the black from record pressure on the ED at University Hospital Limerick (UHL) back onto Fianna Fáil.

“I’m happy with fact that we have a new Emergency Department there, promised for a very long time and that we have the Leben Wing open, that we have the new 60-bed block under construction, that will be open this year,” the Taoiseach told The Champion. “But I don’t think anyone could be happy with the fact that we’ve had serious overcrowding in Limerick for a very long time, but that goes back to the mistakes made by a previous government, when it comes to the way services were reconfigured here in the midwest. As soon as we had money to spend, about two or three years ago, only two of three years ago, we balanced the books in the last two or three years, we’ve been investing massive amounts of money in that hospital, but that could be risked if we have a country run by Fianna Fáil or Sinn Féin the economy will go back into recession and that project will be stalled.”

Among those who raised the issue of health with the Taoiseach was John Wall. The Quin resident who is living with a terminal cancer diagnosis has been running a high-profile campaign on cutting down on red tape in access to medical cards for others in his position. He told The Champion he decided to use the opportunity of the Taoiseach’s visit to remind him of the importance of the issue to thousands of people around the country.

“I wasn’t really planning to do this,” he said. “I heard on the radio that he was in Ennis and turned the car around to come in. He was very respectful and listened to what I had to say, I didn’t think I’d get so much time with him, but his team was happy to facilitate me. We are making progress, but we have to keep this topic on the political agenda.”

As the Taoiseach walked through the streets of Ennis on Friday, he was challenged on climate action, tourism numbers coming to Clare and the use of Shannon Airport by the American military.

Mr Varadkar was stopped by Extinction Rebellion member Annmarie Harrington and questioned over the possibility of the importation of gas if the controversial Shannon LNG plant, proposed for the estuary, received permission to operate. His government was also accused of inaction on climate change and of working to targets that would not produce a timely enough response to the issue.

“2030 is too late to start acting and a carbon charge is going to hit the most vulnerable in society,” said Rose Guy of Fridays for Future Clare. “Why are you [planning to] importing from Shannon LNG? Why aren’t you blocking it?

Pressed repeatedly by Coláiste Mhuire class-mate Wiame Kanane on whether or not he was in favour of the Shannon LNG plant, Mr Varadkar said: “It’s a private sector project. We’re doing a security assessment on it to see whether we may need it or not as part of energy security, and if we don’t need it, we won’t do it.”

There was a friendlier response from a number of retailers, including Patrick Bourke. The businessman presented Mr Varadkar with a pair of socks and a green tie, which Mr Bourke quipped might come in handy for his “future meetings with Donald Trump”.

While he pressed the flesh in a number of retail outlets, there was no handshake for Fianna Fáil TD, Timmy Dooley who was collecting on behalf of Clare Crusaders on O’Connell Street. He did, however, speak to other collectors when approached on Abbey Street, where he listened to the challenges facing the Crusaders and other charities. Mr Varadkar also met briefly with staff and volunteers of the Irish Wheelchair Association, who took the opportunity to underline to him the need for services – particularly transport – for those with disabilities.

Speaking later to The Champion, as the whistle-stop Ennis canvass came to a close, and the Taoiseach prepared to visit Waterford, he touched on another hot button topic with many voters, than of the performance of Shannon Airport.

“There was there was growth for a number of years an it slipped last year, really for reasons beyond [management’s] control,” he said. “What’s positive as people know, is the new routes coming on in the spring. The one that’s most significant to my views is the is the Paris because Paris is a major hub. And I think that’ll bring more people into Shannon and the Midwest. We set aside a fund for airports other than Dublin that they can use to entice airlines to open up new routes.”

The Taoiseach also revealed that he had met with United Airlines over cuts to their services.

“I’ve met personally with United. [It’s] very hard to get the Americans to run a winter route. They tell me to their winter route to Dublin is loss-making never mind one to Shannon but we’ll keep working on that.

“I think real potential around a second European hub other than Paris, most likely Frankfurt or Amsterdam. London Heathrow is there, it’s secure because of the Withdrawal Agreement and the common travel area remaining in place. Paris is being added in and if we get another one, I think would really help Shannon. But I’d also say to people as well, you know, to use those services. You know, don’t be driving to Dublin to get a plane to Paris or to Barcelona when you could get one from here.”

Before departing the Old Ground Hotel, the Taoiseach once again reiterated his belief that Fine Gael can keep two seats in this constituency:

“I think we will pull it off, I do think it’s going to be very tight. There’s definitely a rise in support for Sinn Féin. And that’s been demonstrated across the country, not just here in Clare, but actually, the polls show Fianna Fáil falling below their level in 2016 as well. So I think this assumption that Fianna Fáil is going to make gains may prove to be incorrect. So it is going to be a tight battle for the second seat. Either Fianna Fáil get a second, or Fine Gael get a second seat. I think we’re going to pull it off.”

Fiona McGarry joined The Clare Champion as a reporter after a four-year stint as producer of Morning Focus on Clare FM. Prior to that she worked for various radio, print and online titles, including Newstalk, Maximum Media and The Tuam Herald. Fiona’s media career began in her native Mayo when she joined Midwest Radio. She is the maker of a number of radio documentaries, funded by the Broadcasting Authority of Ireland (BAI). She has also availed of the Simon Cumbers Media Fund to report on development issues supported by Irish Aid in Haiti. She won a Justice Media Award for a short radio series on the work of Bedford Row Project, which supports prisoners and families in the Mid-West. Fiona also teaches on the Journalism programmes at NUI Galway. If you have a story and would like to get in touch with Fiona you can email her at fmcgarry@clarechampion.ie or telephone 065 6864146.
Previous Penalties Only To Be Used To Decide Clare GAA Club Championship Games After Extra-Time In A Replay
Next Duggan Happy With Positive Start To 2020 For Clare Camogie