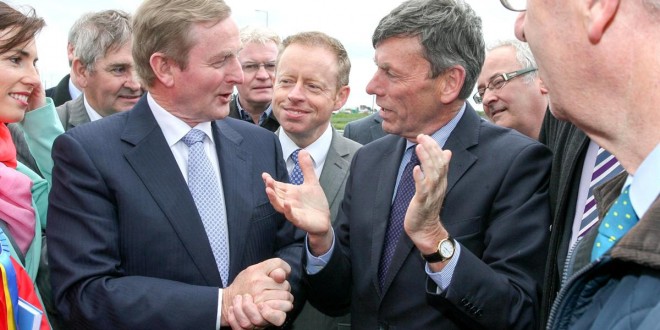 Taoiseach digs in on Gort/Tuam motorway

AN Taoiseach, Enda Kenny was joined by Minister for Transport, Leo Varadkar Hogan on Friday,  in turning the sod on the €550 million Gort to Tuam (M17/M18) motorway project

“This sod-turning event is another step in the Government’s plan to make the recovery local. It’s the largest Public Private Partnership in the current Stimulus programme and is real evidence that Ireland’s PPP market is again open for business. The Gort to Tuam motorway will reduce journey times and significantly improve access in the region. Some 450 new jobs are being created now that the project is underway. The finished motorway will remove several major bottlenecks, boost competitiveness, promote regional development, and generate yet more jobs. It also marks a major step in developing the Atlantic Corridor road network along the west coast,” Mr Kenny said.

This is the second transport PPP signed by this Government and follows the M11/Newlands Cross project. It shows that Ireland’s PPP programme is fully operational again and represents a crucial vote of confidence in the Irish economy.

The new four lane motorway will replace the existing N17/N18 roads, and reduce end-to-end journey times by around 20 minutes. The 57km scheme will provide four lanes from Gort in the south to Tuam in the north, and a major junction with the M6 Galway-Dublin route to the east of Galway City. The road will bypass Tuam, Ardrahan, Claregalway, Kilcolgan, Clarinbridge and Gort and the first traffic along the route is expected in 2018.