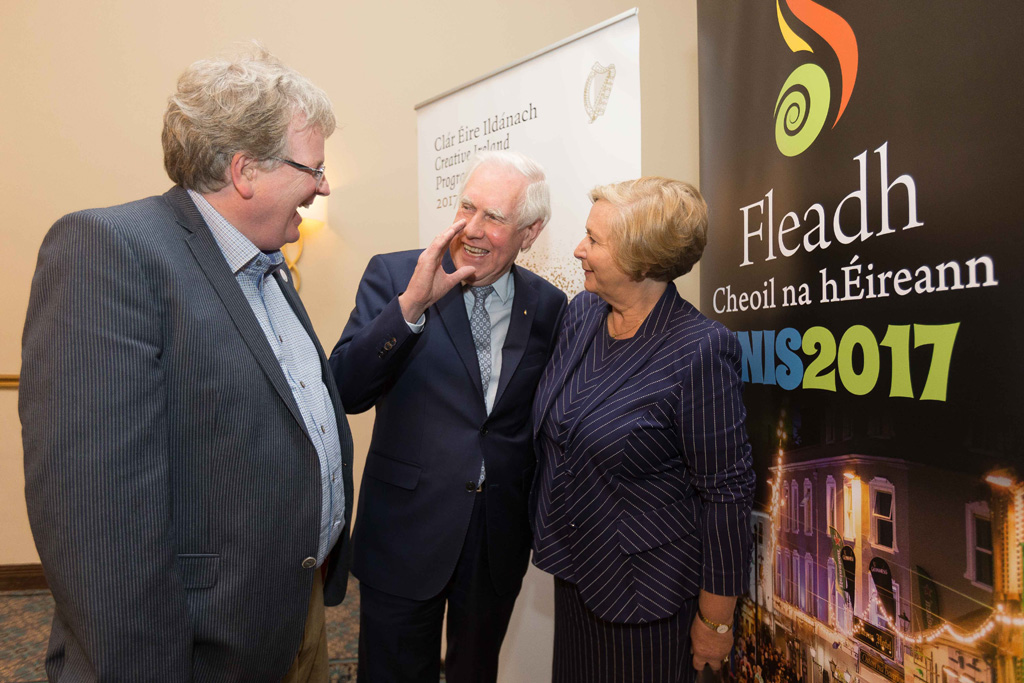 Rory Casey, Fleadh Cheoil, runaí with Lábhrás Ó Murchú and Tánaiste Frances Fitzgerald at the Legacy day colloquim at the Fleadh in Ennis at the weekend.

MORE jobs will be coming to the Banner County before too long, Tánaiste and Minister for Enterprise and Innovation Frances Fitzgerald has said.

On a visit to Ennis, the Dublin TD said that areas away from the capital are not being forgotten, despite the uneven economic recovery.

“The reality is that capital cities tend to attract foreign direct investment but what this Government is saying is we want to see our regions develop. There is a huge commitment to regional development. We spent a lot of time at our Cabinet meetings discussing regional development. In Dublin, you see the problems when you have over-development in terms of transport issues and housing issues.”

Roche Ireland was a stellar employer in Clarecastle for many years but is on a path towards closure but Minister Fitzgerald said the Government is doing what it can to avoid that outcome.

“Everything possible is being done; the IDA are actively engaging on that issue. I’ve met with the IDA myself, Minister Pat Breen and myself have discussed it. No stone will be left unturned in terms of securing future investment there; we’re working on that.”

When pressed for further information, she added, “When you’re in the middle of negotiations, you just get on with negotiations and every effort will be put in”.

At the end of 2012, when Shannon was being separated from the DAA, there were forecasts of huge job creation in aviation-related industries.
While that has not come to pass, she said Clare is still recovering well from the recession.

“Let’s look at what has come to pass in Clare. You have a 33% reduction in unemployment over the last couple of years; that’s really important. You’ve had more jobs created; you’ve had several thousand IDA jobs created. Yes, every county wants more and there was an expectation in one area but what I would say to you is that economic development now in Ireland is reaching across all of the regions. The Mid-West is the fastest growing region outside of Dublin; that’s really important. In terms of individuals reading your story, everyone knows someone who has got a job now.”

She said there has been a fair bit of interest in coming to Clare from multi-nationals. “You had 18 site visits down to Clare last year, so that’s important. You’ve had those visits; they’re doing those for a reason. I’ve met companies myself. I talk to them about regional development and the attractions.”

The Tánaiste added, “I think there is room for a lot of optimism. I think there will be more jobs announced in the coming months and years. The IDA has a very impressive target of creating more jobs in every region in the next short number of years. The pipeline is good at the moment in terms of company. It’s also important to see local enterprise supporting female entrepreneurship, supporting local development because most jobs are going to be created in small businesses because they are the backbone of this country and you’re seeing that in Clare as well.”