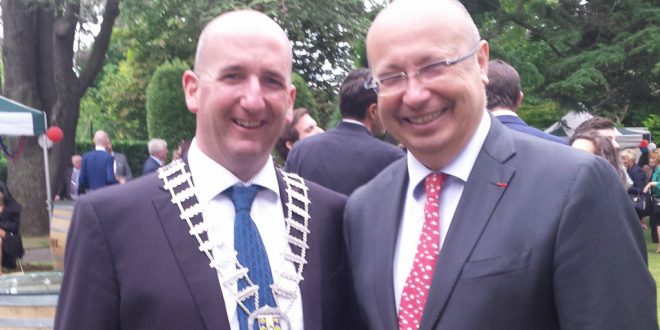 July 18, 2016 Comments Off on Council attends celebrations at French Embassy

Clare County Council was represented by Leas Cathaoirleach Councillor Paul Murphy at the French Embassy in Ireland’s Bastille Day celebration in Dublin. The celebrations complemented the 1916 commemoration with re-enactments depicting various episodes in Ireland’s long and shared history with France including Hoche and Tone’s Bantry Bay expedition of 1796, French General Humberts expedition to County Mayo in 1798, the 1916 Rising and Ireland’s involvement in the Battle of the Somme during Wold War 1. The celebrations had concluded before word of the Nice tragedy became known on Thursday night. Clare County Council has opened a Book of Condolence in memory of the victims of the attack. Members of the public are being invited to sign the Book during opening hours of 9am to 5pm, Monday to Friday at the corporate headquarters of Clare County Council, Áras Contae an Chláir, Ennis. The book is available until Friday after which it will be delivered to the French Embassy in Dublin.