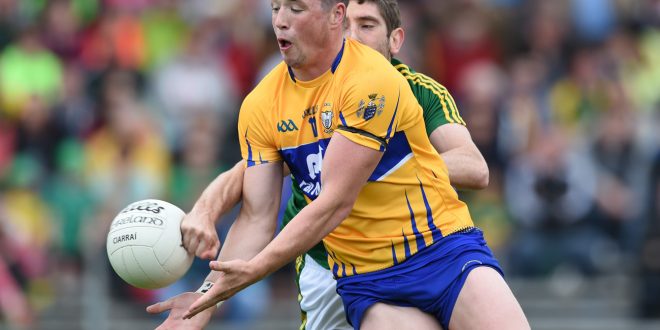 March 19, 2017 Comments Off on Footballers well beaten in Enniskillen

Fermanagh 0-18 Clare 1-10 A disappointing second half display, during which Clare were outscored 0-10 to 1-3 by Fermanagh, contributed significantly to their second league defeat of the 2017 season. With upcoming games away to Kildare next weekend and at home to Meath on Sunday fortnight, Clare now sit on five points. They were outplayed in most sectors by Fermanagh who looked driven and focused on picking up two crucial points. Following an intense first half, Fermanagh led 0-8 to 0-7 at half-time. Clare played some good football in patches but frustratingly they lost possession on a couple of occasions, which led directly to points for the home county. Eoin Cleary pointed 0-5 in the first half, 0-4 from frees, while David Tubridy pointed 0-2, 0-1 from play. The Doonbeg forwards point from play was Clare’s first score and he put it over in the tenth minute. Fermanagh had a more even scoring spread in that half with Seán Quigley … 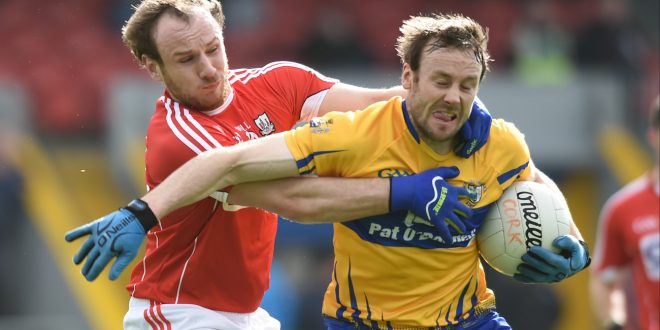 March 5, 2017 Comments Off on Footballers beat Cork in league for first time in 23 years

Clare 2-11 Cork 0-9 AN outstanding second half display, during which Clare outscored Cork 1-9 to 0-4, helped the home county to their first league win over Cork in 23 years. The game was played in sometimes very challenging conditions in front of a crowd of 985 people in Cusack Park. Clare are now joint second with Galway in the division 2 table, on five points after four games. They are just a point behind leaders Kildare. Clare captain Martin McMahon felt that the panel of players were honest with each other following last weeks defeat to Galway in Salthill. “We worked really hard this week at training. We went back to basics and really got stuck into each other. Tactics were right today and everyone just worked as hard as they could,” the Kilmurry Ibrickane man said. “Today we said that we were going to try and keep it nice and tight. I think our forwards worked really hard. … 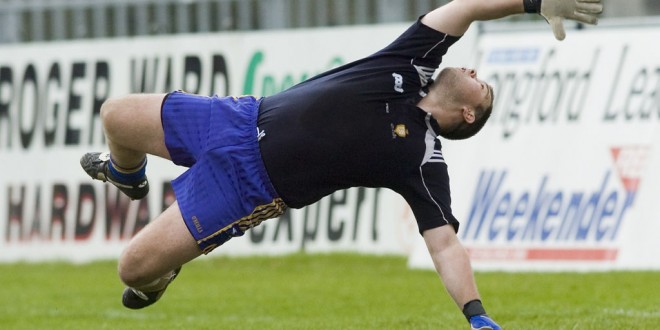 February 26, 2017 Comments Off on Clare fall flat away to Galway

Galway 3-13 Clare 1-11 THE Clare footballers were emphatically beaten by Galway in Salthill on Sunday afternoon, in what was their first defeat of the 2017 NFL division 2 league season. In a game dominated by an exceptionally strong wind and torrential second half rain, Clare conceded three goals, having let in none in their opening games against Derry and Down. Goals from Eamon Brannigan and Shane Walsh helped Galway to build a 2-8 to 0-5 interval advantage. Too often Galway players broke from deep with no Clare player tracking. Clare needed to start the second half with a couple of scores but instead Johnny Heaney and Barry McHugh pointed for Galway, who now led by 11 points. A Keelan Sexton goal, set up by Cian O’Dea, gave Clare brief hope but nine second half wides, cost them. Clare did miss some decent goal scoring opportunities, while goalkeeper Joe Hayes made a couple of excellent saves. “We had goal chances … 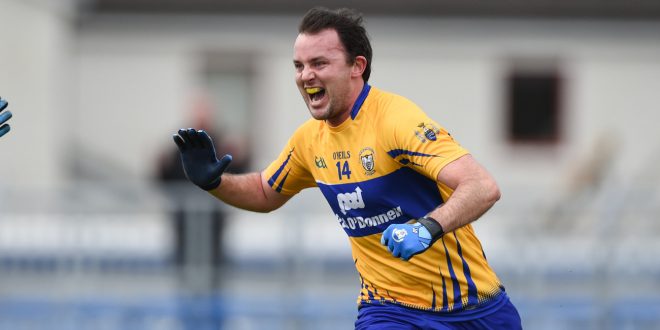 First half goals key to footballers defeat of Down

February 12, 2017 Comments Off on First half goals key to footballers defeat of Down

Clare 2-11 Down 0-11 THE key to Clare’s six point defeat of Down in Cusack Park on Sunday, was David Tubridy’s injury time goal just before half-time. The Doonbeg man put away Clare’s second goal, seconds after he had pointed a clear goal scoring chance. Keelan Sexton scored Clare’s first goal in the second minute after Tubridy had cut in along the end line, easing beyond Down defenders Gerard McGovern and Niall Donnelly. [data-ps-embed-type=slideshow] > iframe {position: absolute;top: 0;left: 0;} http://photos.clarechampion.ie/js/psEmbed.js _psEmbed(“http://photos.clarechampion.ie”); Come half time Clare led 2-7 to 0-3 and while that 10 point lead was emphatic, they could have led by much more. Clare kicked eight wides in the first half, along with missing at least two clear goal opportunities. The game was played in bitterly cold conditions in Ennis in front of an attendance of 1,749. Clare’s opening 20 minutes was their most impressive spell with their tackling and tracking exceptional, even if their shooting did not … 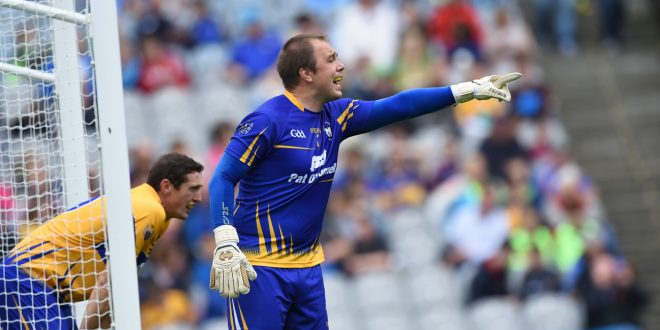 Footballers pick up a point in Derry

February 5, 2017 Comments Off on Footballers pick up a point in Derry

Clare 1-8 Derry 0-11 A James Kielt point, kicked from 40 yards, five minutes into injury time, snatched a late equaliser for Derry in the opening game of the NFL division 2 in Celtic Park on Sunday. This was a game that Clare created sufficient chances to win and in fact they kicked 15 wides and missed at least two goal chances. However Clare goalkeeper Joe Hayes made two excellent saves while three Clare players were black carded in the second half. Clare had no substitute left to replace black carded Dean Ryan in the closing minutes. Derry led 0-6 to 0-5 at half-time. Clare kicked eight first half wides and spurned great goal scoring chances when Seán Collins and Jamie Malone failed to capitalise on excellent opportunities. Gary Brennan, playing his second game inside 19 hours, made several energetic runs from midfield and was involved in creating some of Clare’s first half points. Midfielder Ciaran Russell put over Clare’s …

Clare 2-17 Kildare 1-19 AN Eoin Cleary free, converted five minutes into injury time in a pulsating NFL division 3 league final in Croke Park on Saturday evening, guided Clare to a sensational defeat of Kildare. Corofin’s Jamie Malone was fouled for the crucial free and Cleary, who had been promised a trip to Liverpoool by selector David O’Brien if he delivered at GAA headquarters, stroked over the winning point from a tight angle, 23 yards out. With normal time almost up, Clare trailed 1-18 to 1-15 and it looked as if their chances of winning had evaporated. However a Martin McMahon diagonal ball, found Gary Brennan and the Clare captained placed Dean Ryan for a dramatic equalising goal. Not noted for his goal scoring, Ryan finished lethally from six inches. Two minutes later, substitute Shane McGrath hit the post with a point effort but another sub, Enda Coughlan, reacted quickest and fisted over the rebound. However Kildare responded with … 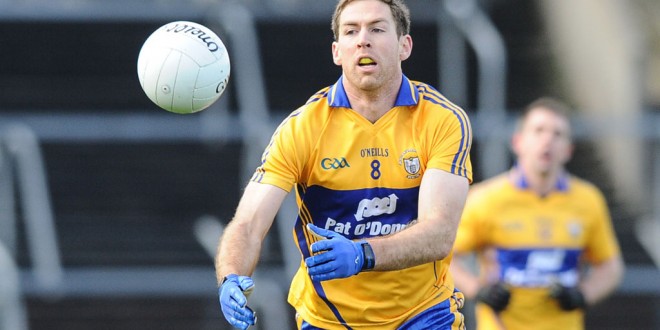 April 3, 2016 Comments Off on Footballers promoted on scoring difference

Kildare 0-22 Clare 1-14 ALTHOUGH beaten in Newbridge on Sunday afternoon the Clare footballers will play division 2 league football in 2017 as their scoring difference ensured that they will join Kildare in the higher league. The same counties will also meet in the division 3 NFL final in Croke Park on Saturday April 23. Clare are likely to be without David Tubridy however. The Doonbeg man was shown a straight red red following an incident with Kildare wing back Ciaran Fitzpatrick as the game approached injury time. From this observers point of view Tubridy was very harshly red carded. Fourteen minutes from time, Clare led 1-14 to 0-15 and it looked as if they had every chance of at least drawing. However powered by their bench,with Eamon Callaghan particularly effective, the home county scored the last seven points with Clare not managing a score in that spell. So while Clare were delighted when word came through that Longford had …

Offaly 0-15 Clare 1-11 FOLLOWING an exceptionally poor first half display, Clare improved significantly in the second period but eventually lost out to a Michael Brazil point from play, which was kicked six minutes into injury time. The fact that the Offaly centre forward cut through the Clare defence without any Clare defender impeding his progress, underlined some of the deficiencies in this display. Lifted by their wins over Limerick and Westmeath, Clare showed few signs of their form in those games. While their performance was not good enough, if promotion is to be a realistic aim, they did show admirable resolve in the second half and Eoin Cleary’s 70th minute goal leveled the game. Five minutes into injury time the Miltown forward was certain he had kicked the winning point but it was waved wide and neither was a 45 awarded. He confirmed afterwards that if the ball was in fact wide, it was definitely a 45. A minute …