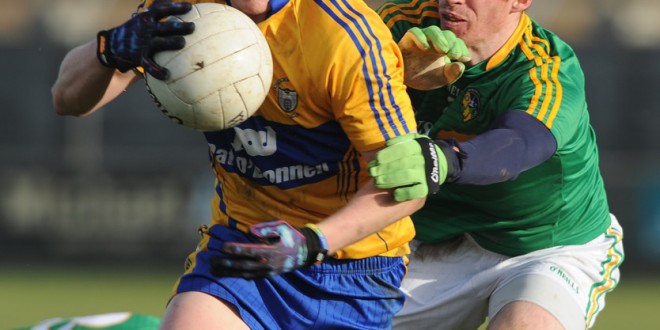 April 10, 2014 Comments Off on Podge delivers crucial 35 minutes for Clare

INTRODUCED at half time, Podge Collins made an invaluable contribution to Clare’s promotion winning second half display in Creggan. The All-Ireland winning All-Star hurler kicked two crucial points from play and along with players like Shane McGrath, his brother Seán, Ciaran Russell and Dean Ryan, the UL student worked exceptionally hard on and off the ball. Speaking afterwards Podge said that the passion evident in the dressing room inspires him. “You can tell by the way lads talk in the dressing room, before games and at half time, how passionate they are about it. I know it doesn’t sound too glamorous after winning the All-Ireland hurling but it’s absolutely huge, especially in my house. It’ll be a happy house for the night,” he laughed. Collins acknowledged that it took him a few minutes to get up to the pace of the game after his introduction for Jamie Malone. “Coming up to Antrim we didn’t really know what to expect. I’d … 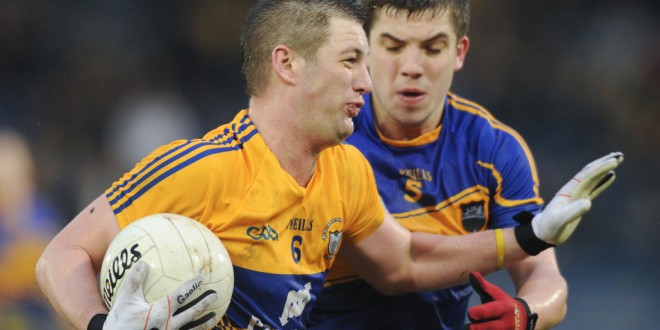 DEFENSIVELY Clare produced their best display of the 2014 season, conceding just six points. Given that Clare conceded big scores and soft goals against Tipperary, Carlow and London, tightening up at the back was a definite priority for Paudie Kissane and his coaching team as they prepared for the game in Antrim. In fact the home county scored just three points from play and didn’t score at all until the 35 minute. Of course it must be noted that they were playing into a near storm in that opening half. Another area where Clare did well was on their own kick out, retaining the vast majority of them while they managed to win more than half of Antrim’s second half kick outs. Underlining their physical conditioning Clare definitely had more possession than Antrim, particularly in the second period, when they held possession impressively and ran at the Ulster county. However there are several areas where Clare can improve, most notably …

April 6, 2014 Comments Off on Footballers promoted to division 3

Clare 0-10 Antrim 0-6 A MAGNIFICENT second half display helped Clare to a four point win over Antrim in Creggan on Sunday, ensuring promotion to division 3. Having played division 4 football since 2008 this win was a huge boost to Clare football as it was the county teams fourth recent attempt to secure promotion on the final day of the season. They lost out in 2010, 2012 and 2013. Clare’s second half display was led by excellent performances from half time substitute Podge Collins, who scored two points from play, Shane McGrath, Gary Brennan, along with wing back Ciaran Russell, who had a superb game. Things didn’t look quite so positive at half time though. Clare led 0-4 to 0-2 having played with a very strong breeze at the Antrim venue. Incredibly the game was scoreless until the 19th minute when Martin O’Leary pointed a free. Clare kicked 13 first half wides, while David Tubridy, Seán Collins McGrath added … 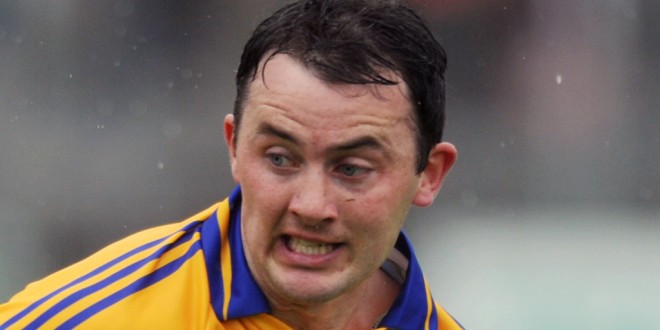 Clare 3-21 Carlow 2-10 IMPRESSIVE in attack yet occasionally porous defensively, the Clare senior footballers eased to a 14 point win over Carlow in Cusack Park on Sunday afternoon. This win, coupled with Leitrim’s defeat at home to Tipperary has ensured that a win for Clare away to Antrim next Sunday, will guarantee promotion to division 3 for 2015. In fact following Leitrim’s comprehensive defeat to Tipperary in Carrick on Shannon, Wicklow are now Clare’s primary promotion rivals. They play already promoted Tipperary at home next Sunday, needing a win to put the pressure on Clare. Clare led 1-10 to 2-4 at half time against Carlow. David Tubridy scored the winners first half goal and added three pointed frees, while Martin O’Leary and Seán Collins kicked a brace apiece in the opening period. Shane McGrath, Gary Brennan and Shane Hickey added first half points with the latter issued with a black card after the Kilmurry Ibrickane man pulled down Ciaran Moran to give … 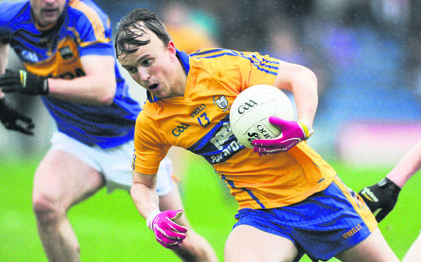 Bad night for U-21 footballers in Miltown

By Seamus Hayes IT was a bad night for Clare football at Miltown on Wednesday evening, as the U-21 footballers suffered a heavy defeat to Tipperary in the Munster championship semi-final. All-Ireland minor champions three years ago, Tipperary went into the game with the favourites’ tag but not even their most ardent of supporters expected this tie to be so one-sided. Clare were, to put it simply, outclassed by a visiting side that scored all but a point of their tally from play, whereas Clare could only manage two scores from play. In front of an attendance of 624 at Hennessy Park, Clare went into the half-time break trailing by four points. The writing was on the wall as they had just played with the aid of a very strong wind but had failed to make any real impression on the favourites, who kicked some impressive scores. Tipperary were by far the livelier side and used the ball much better. … 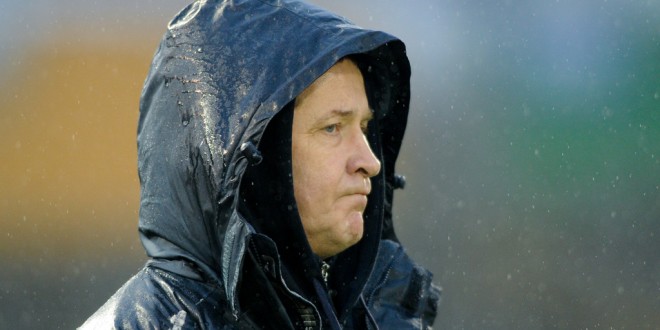 Goals win it for Tipperary footballers in Thurles

March 9, 2014 Comments Off on Goals win it for Tipperary footballers in Thurles

Tipperary 3-9 Clare 0-14 ALTHOUGH they battled bravely and were still in the game half way through the second half, the concession of three goals handed the result to Tipperary. Clare played some decent attacking football and put over some outstanding points from play. The games crucial score was Tipperary’s third goal, 19 minutes into the second half. Barry Grogan netted his second penalty, the first had been well saved by Pierce Deloughrey. Clare made a very shaky start to the opening half when Tipperary corner forward Conor Sweeny goaled after a mere 19 seconds. They also had a Barry Grogan penalty saved by Pierce Deloughrey, while Grogan later buried Tipperary’s second first half goal. To Clare’s credit though they held their composure for much of that first half with Shane McGrath kicking three marvellous points from play. David Tubridy knocked over four first half points, including two from play and a ’45, which was the last score of the … 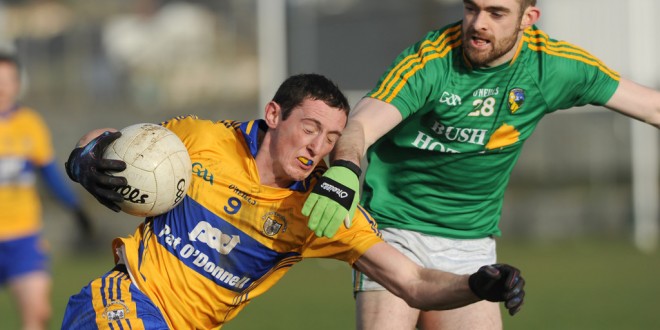 CLARE football management have made two change to their starting 15 for Sunday’s NFL Divison 4 game against Tippeary in Thurles at 3pm. Óige Murphy returns after injury and comes in for Kevin Hartnett, who picked up a hamstring injury against Wicklow last Sunday. Under-21, Jamie Malone from Corofin, replaces Podge Collins, who will be part of the Clare hurling panel, also against Tipperary on Sunday. The footballers starting 15 is: Pierce Deloughrey; Dean Ryan, Gordon Kelly, Martin McMahon; Óige Murphy, Enda Coughlan, Shane Hickey; Gary Brennan (captain), Cathal O’Connor; Shane McGrath, Seán Collins, Shane Brennan; Martin O’Leary, David Tubridy, Jamie Malone. Clare are currently top of Division 4 on seven points. However, they have played a game more than Tipperary, who sit on five points.

Clare pick up points at home to Wicklow

March 3, 2014 Comments Off on Clare pick up points at home to Wicklow

Clare 2-13 Wicklow 1-8 THE Clare footballers maintained their drive for promotion from division 4, with an eight point win over Wicklow in Cusack Park on Sunday. Clare are now top of the division with three games left to play. Both teams were unbeaten before the game, with Wicklow having won both of their games prior to this tie, while Clare had beaten Waterford and London, while they drew with Leitrim. The biggest talking point to emerge from this game came in just the sixth minute when Wicklow captain Leighton Glynn was red carded following an incident with Martin McMahon. Wicklow were incensed at referee Seán Joy’s red card and while Clare didn’t immediately capitalise, they assumed control the longer the game wore on. With David Tubridy excelling in attack and Gary Brennan netting a first half goal for Clare, they led 1-4 to 0-6 at half time, having played into the breeze. Clare restricted Wicklow to 1-2 in the …