February 15, 2015 Comments Off on Apology over Blake’s Corner ‘fiasco’

The chief executive and a director of services of Clare County Council have apologised to the three families affected by what has been described as the “fiasco” of the council’s handling of proposals on Blake’s Corner in Ennistymon. Council CEO Tom Coughlan has privately delivered an apology to the families whose homes and businesses could face demolition if a new bridge, aimed at alleviating traffic problems at Blake’s Corner, goes ahead. Councillor Richard Nagle raised the matter at Monday’s meeting of the council in a motion that called for a protocol to be put in place that would outline clearly how individuals and communities are to be consulted concerning any proposals that directly affect them. “I put down this motion because I believe that it is important that we, as a council, have clear guidelines in place for projects that have a major impact on individual members and the communities in which they are to take place,” Councillor Nagle stated. …

February 8, 2015 Comments Off on Residents to meet council over Blake’s plan

A committee set up in opposition to the route of a proposed new inner relief road in Ennistymon will meet with senior Clare County Council officials again later this month. The group, made up of residents and local representatives, met with officials from the local authority on Monday and had “a full and frank exchange of views”, according to committee chairman, Senator Martin Conway. The committee was set up at a large public meeting on January 23, after it emerged that the council’s “preferred solution” to congestion at Blake’s Corner would likely result in the demolition of three homes, including one belonging to a young family and another to an elderly couple. “Following our mandate from the public meeting, I have been in regular contact with senior officials in Clare County Council, regarding the threat to family homes and businesses as a result of the proposed inner relief road. These discussions culminated in a meeting between the committee and council … 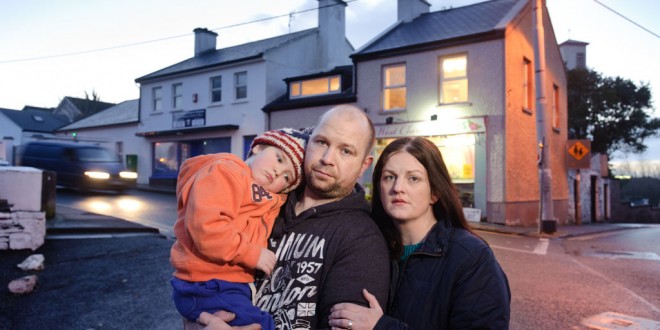 January 24, 2015 Comments Off on Homes to go in new Blake’s Corner plan

FOUR houses and business premises could be knocked in the latest attempt to address Blake’s Corner in Ennistymon, one of the county’s worst bottlenecks. One couple, due to move into their first family home this week, has organised a meeting seeking public support in what they predict will be a major battle with Clare County Council and the National Roads Authority. Sheena Clancy, her husband, John and their four-year-old son, Jamie, are “devastated” after finding out they could lose the house they have spent the past seven months renovating and which they plan to move into this Friday. Sheena rented the property at Bridge Street for three years before the couple bought the building at auction last May, to renovate as their family home. Now, the family has discovered that the building is likely to be the subject of a Compulsory Purchase Order (CPO) because it is in the path of a proposed new road. Sheena and John were paying …

Blake’s and Linnane’s to stay

A report on one of the county’s most controversial traffic blackspots has recommended the construction of a new relief road and bridge. Blake’s Corner in Ennistymon has been the scene of traffic chaos for several months each year as hundreds of thousands of people make their way to the Cliffs of Moher. In recent years the corner has been the subject of much controversy with local representatives calling for the demolition of the well-known Blake’s and Linnane’s buildings while local heritage activists have called for their retention. Many North Clare councillors have, for the past decade, requested that Clare County Council knock the buildings arguing that the nature of the busy junction would lead to the death of a pedestrian. A group called Save Ennistymon’s Heritage campaigned for the buildings to be retained claiming they were important to the town’s visual amenity and heritage. It now appears that an inner relief road will be constructed in the village cutting out …

Threat of protest at Blake’s corner

January 18, 2015 Comments Off on Threat of protest at Blake’s corner

Councillor Bill Slattery has upped the ante considerably with regard to his opposition to the traffic issues at Blake’s Corner, Ennistymon. While the January meeting of the West Clare Municipal District heard suggestions that the controversial bridge should be blown up, on Tuesday Councillor Slattery told The Clare Champion that he would act decisively at the busiest time of the year in Ennistymon and Lahinch, if an upcoming consultant’s report on the issue is not to his liking. Councillor Slattery believes the only option left to progress the issue is for him to spend time on the bridge during the upcoming visitor season. “I will protest on the bridge during busy weekends for the 2015 season. I want this brought to the attention of the people of Ireland and not only the people of North Clare. I’m getting complaints from Dublin about this. This is an absolute disgrace,” he thundered angrily. “The vast majority of people in Clare want this …

April 18, 2014 Comments Off on Clare roadworks funding has halved

By Owen Ryan FUNDING for roadworks in Clare has been almost halved over the last six years and maintaining the county’s infrastructure is now “a real case of loaves and fishes”, this week’s meeting of the County Council heard. Senior engineer Tom Tiernan presented the council’s roadworks programme to Monday’s meeting, which was held in Killaloe, in honour of the Brian Ború Millennium Celebrations. He told the meeting the total allocation for 2014 is a massive 46.8% less than the figure for six years previously. “2008 was the last year of the so-called Celtic Tiger and, since then, things have been on the slide, basically.” The 2014 allocation is down by just over 6%, to €16.8million, from €17.9m in 2013. In the introduction to the programme, it was stated weather conditions have only added to the problems created by the declining funds. “It is now six years since the last roadworks programme, which reflected the characteristics of the boom period, …