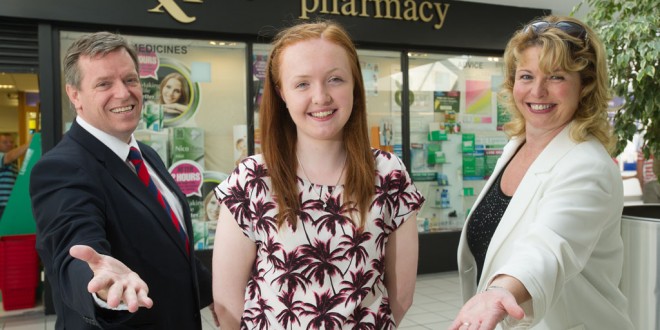 Susan Wlliams of Ballycasey, Shannon was recently announced as the recipient of the Normoyle Hillery Scholarship 2014. She is photographed with pharmacists Séadn Hillery and Valerie Normoyle who have initiated and supported the €5000 bursary for the past two years. Photgraph by John Kelly.

Susan won the much sought-after €5,000 science scholarship from a shortlist of 16 of the highest calibre students in Clare. She attended St Caimin’s Community School and has just begun her studies in physiotherapy at the University of Limerick.

“This award is way beyond my wildest dreams,” said the Ballycasey girl. “It just hasn’t sunk in. I met the other shortlisted candidates at an interview preparation session prior to our final interview and the standard of achievement was so high. I was so happy to be among them but receiving the award is just an unbelievable start to my course of studies and my career,” she added.

Susan was a participant in the BT Young Scientist Competition last year, with a project based on the use of crutches during injury and the effect their use has on other body parts, particularly the hands and arms. She was also an award-winner in the Canadian Maths Competition 2011 and was twice Student of the Year at St Caimin’s Community School. She has been a member of Clare county camogie panels.

“We are humbled by what these young students have achieved academically but, even more so, the manner in which they have presented and acquitted themselves,” said Seadn Hillery, proprietor of RX Pharmacy in Shannon.

Valerie Normoyle added that Susan will be a wonderful ambassador for the promotion of science among young people and a worthy winner of the award.

For Valerie, the scholarship process was poignant this year, following the death of her mother, Noreen, in June. Noreen was a prominent pharmacist in Ennis and the idea for the scholarship was an acknowledgement of her contribution to pharmacy and to that of Seadhn’s late father, Sean Hillery, who served the Shannon and South-East Clare community for many years.

The Normoyle Hillery Scholarship is intentionally Clare-focused and was established to support the study of students from the county taking a science-theme course at an Irish or British university. It was open to 2014 Leaving Cert students studying either chemistry, physics or biology.

The scholarship will be disbursed over the years of the course of study and requires the recipient to pass appropriate exams each year. The 2013 winner was Mullagh’s Niamh Sexton, who is now a second-year Sports and Exercise student, also at the University of Limerick.

ALTHOUGH Aer Lingus is in receipt of the Employment Wage Subsidy Scheme, it has announced …