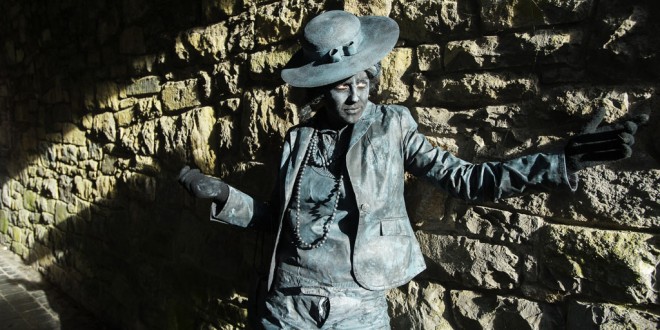 Pupil Aoife Ní Sheannáin, out an about in Ennis, to promote the Ennis Community College and Gaelscoil fundraising fashion show. Photograph by John Kelly.

IT wasn’t a case of their eyes deceiving them when shoppers in Ennis last Friday observed moving statues in the town’s main thoroughfare.

Bringing statues to life was an innovative art project and publicity stunt by students of two local schools, Ennis Community College and Gaelcholáiste an Chláir, to promote the upcoming Winter Fashion Show and Christmas Fair being held in aid of the schools.
Each ‘statue’ was played by a student, dressed in a costume made from fabric stiffened with glue and painted to create the effect of stone. Each represented a well-known figure associated with French history and culture, such as Marie Antoinette, Napoleon, Marcel Marceau, Coco Chanel, footballer Eric Cantona and the band Daft Punk.

The idea arose recently during preparations for French Day at the two schools, which share one campus in Harmony Row. French teacher Brendan Carragher came up with the idea of depicting well-known French figures and the concept of the statues came from art teacher, Saoirse McDermott.

“They have a big annual celebration called Teachers’ Day and we came up with the idea of the moving statues there. It was a great success and I was looking for an opportunity to recreate it when I returned to Ireland,” she added.

It turned out to be an exciting project for the art students, engaging them in the creative process from conception to completion. Staff and students donated clothes, which were then stuffed to emphasise the creases, covered in PVA glue to keep them in place and painted in black and grey to resemble stonework from head to toe. The painting also included the models’ faces and hair.

Staff and students were extremely receptive to the idea and so too were members of the public, who were impressed with the spectacle on the streets.

The ‘statues’ distributed flyers to promote the Winter Fashion Show and Christmas Fair, being organised by the schools at Treacy’s West County Hotel, Ennis on Wednesday night next.

Amateur models, both staff and students, will share the catwalk with professionals, co-ordinated by Coast Model Management. The event will also feature a Christmas Fair with a range of gift ideas from over 40 local traders.

Clare young scientists at the RDS