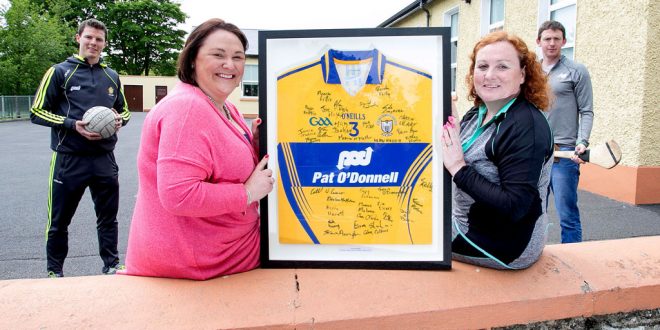 Friends, neighbours and staff at Stonehall National School have rallied around a charitable cause for a 13-year-old pupil, who has a very rare medical condition.

A number of fundraising events have been organised for Tara’s Trust, including a recent wax, shave or dye event in The Honk Bar and a gala barn dance at the Inn at Dromoland on Saturday, June 11.

The sixth-class pupil in Stonehall National School suffers from a condition known as hemangioendothelioma, a very rare vascular tumour. Her numerous surgeries have included three spinal fusions, a splenectomy and, more recently, decompression of her spinal chord, as well as undergoing chemotherapy and trials on various drugs.

While Tara is on daily painkillers, she has battled the disease with great courage and spirit and loves going to school and being with her friends.

All the proceeds from the fundraisers will be donated to a special fund, which the family can use to support research or pay for specialised treatment, if a cure is ever found. The O’Brien family also hopes to make a donation to Dr Brian Rubin in Cleveland, USA, who is conducting extensive research into the condition.

Tara was just six when she was diagnosed, in May 2011, in Our Lady’s Hospital for Sick Children in Crumlin. Tara’s condition is so rare that it does not fall into the listed variants of the condition. In Tara’s case, it is benign but behaving aggressively.

Although there is no cure for the condition, Tara has been prescribed various different medications to try and prevent the tumour from acting aggressively and she receives MRI and CT scans at three-month intervals.
Geraldine explained, “It is a very unknown condition. It is very rare; she is one in a million. Doctors don’t know why it behaves like it does. None of the doctors around the world know much about it. They don’t know what triggers lesions. It is like a rollercoaster ride, going from scan to scan.

“Like every child, Tara just wants to be treated like a child and gets on with things after her operations. In the hospital, she is brilliant. She has her bloods taken regularly and is relaxed during her MRIs. She could give lessons to other children on how to do things. She never looks for attention and would rather not be in the spotlight.”

The family moved to Stonehall about 18 years ago. Tara’s two siblings also attended Stonehall National School and Tara is planning to go to St Caimin’s Secondary School in Shannon in September.

Geraldine has described the support of the local community and the school as “heart-warming”.

Stressing that the family did not seek or expect this support, Geraldine said she was approached by Sionna Mahony and Mary Considine, who asked her if there was anything they could do to help the family. A fundraising committee has been formed, consisting of Sionna, Mary, Vicky Cassley, Siobhán Conway, special needs assistant at Stonehall National School; Linda Donlon and Megan O’Brien Quinn.

Clare footballer, Kevin Harnett has donated a jersey to the fundraising efforts. He wore the number three jersey when the Banner side pipped Kildare to capture the Division 3 National Football League title in Croke Park.

The Meelick clubman, who undertook teaching practice in fifth and sixth class in the school recently, said when he heard about the cause, he was delighted to help. While the jersey meant a lot to him, given the circumstances and the cause, he had no hesitation in handing it over.

He is urging people to support the upcoming fundraising barn dance.

When teacher, Cillian Duggan was asked by Siobhán to participate in the wax, shave or dye, he said he would willingly participate, if he was joined by the principal, Diarmuid McMahon. The Clooney-Quin senior hurler had his head shaved during the recent fundraiser but Diarmuid, who had originally agreed to participate, had to withdraw as his sister was getting married on the same day.

Cillian said his teaching colleagues, clubmates and friends all donated money to the cause.

Diarmuid said the O’Brien family has had very close links with the school for almost two decades.

“Tara is a very popular student in the school. She has had a very tough time over the past few years but always remained very positive and strong. Even after operations, when it would be difficult, she was very determined to come to school.

“Her classmates are very supportive. She had a major operation about eight weeks ago, which was a success but was a nerve-racking time for everyone in the school and the entire school community. It was great to see her return to school and she was in great form,” he said.

Tara’s teacher, Clare Moran, said they are a very closely-knit class, having gelled very well since junior infants. She said it is hard for Tara’s friends when she misses school due to her operations, as they miss her a lot.

“When Tara comes back to school, it changes the atmosphere in the class because her friends are so happy to see her. She fits straight back in, as if she had never left. The mood is uplifted when she returns because she is always in brilliant form.

“She always comes back in smiling and gets back into work, regardless of how much time she has missed. She has a lovely way about her. She is very popular with her peers, fifth class and the rest of the school. She is great with the younger students, who are very fond of her. You can tell when Tara is in because there is a buzz around her. It is so tough for Tara to go through something like this so young and to try and fully understand it herself.

“I know a lot of children wouldn’t understand what she is going through, including some of her own classmates, because it is such a rare condition,” she explained.

She said all the staff are delighted to help out with the fundraising.