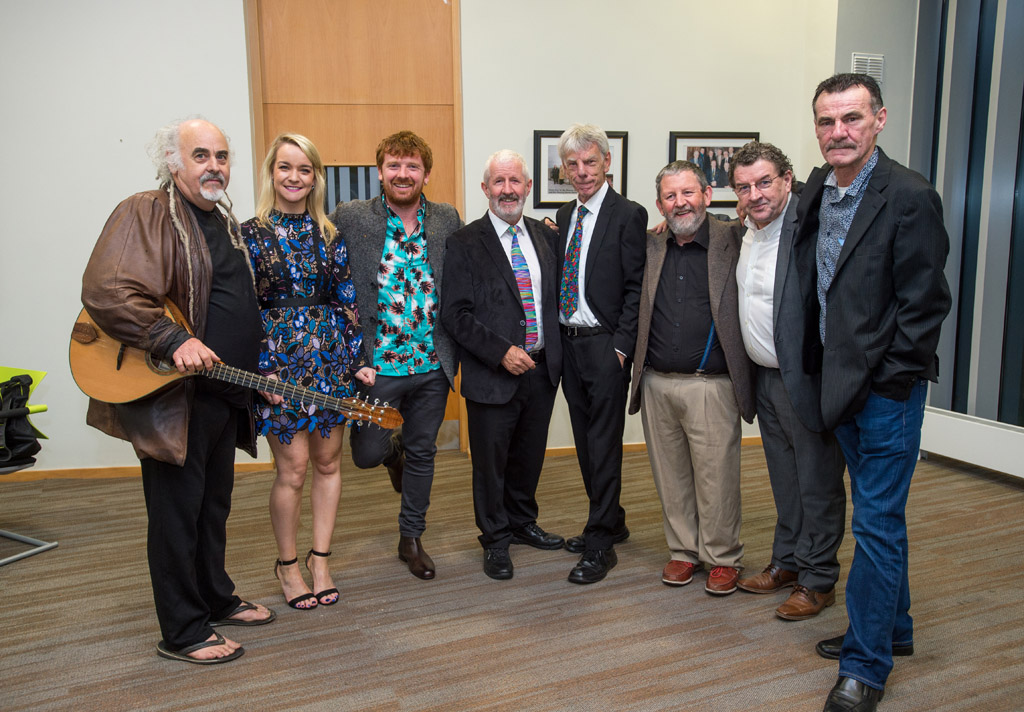 GLOWING tributes to the contribution made by Stockton’s Wing to Irish and folk music in Ireland and abroad were paid during a civic reception on Monday night.

Past and present members of Stockton’s Wing, which was formed in Ennis in 1977, gathered at Áras Contae an Chláir along with elected members, council officials, special guests from the world of music and entertainment, family and friends.

On behalf of the group, Mike Hanrahan said the band were “humbled and delighted” to be recognised in such a tremendous way in their own county.

He said the band was accepting the award on behalf of their families and all the countless people who supported them over the last 40 years.

He recalled ditching his books in the River Fergus after the school holidays and heading up to Doolin in a car with his brother Kieran and Paul Roche, where they discovered a whole new world of musicians, poets, dancers, “chancers, lovers and dreamers”.

They also met Tommy McGann, who became their friend and mentor and played a pivotal role in their success throughout the USA. He recalled that producer PJ Curtis introduced the band to global music, while Deirdre Costelloe gave them the keys to a Dublin studio to record at night because they couldn’t afford the daytime rates.

He said Oliver Barry became a real mentor for the band, taught them about the industry and introduced them to people such as Sammy Davis and Terry Wogan because he saw “a bunch of guys from Clare who just wanted to get on and enjoy themselves” playing music.

Cathaoirleach of Clare County Council Tom McNamara said, “From sharing a stage with Michael Jackson and Sammy Davis Junior to featuring in Jim Sheridan’s film The Field with Richard Harris and from headlining concerts all over the world to producing 12 albums including several top 10 singles, Stockton’s Wing truly is a band for all the ages”.

Councillor Ann Norton recalled the atmosphere in the Dome was electric when they performed a “mind-blowing” concert to a packed house during Fleadh Cheoil na hÉireann last year, while Councillor Clare Colleran-Molloy praised the band for producing so many fantastic performances in concert over the decades, including in 2003.

Councillor Pat Daly said that 40 years on the road was a fantastic achievement for a band with members from St Michael’s Villas in Ennis and Councillor Johnny Flynn described the band as “fantastic ambassadors for Ennis and Ireland”.

Councillor Mary Howard said she was very proud that members of the band came from the heart of the town. Councillor Pat Hayes praised the band for being so adventurous, while Councillor Pat Burke recalled attending one of their concerts the night before the 1995 All-Ireland final.

Former Councillor Bernard Hanrahan joked that while the band became more and more successful over the decades, he went “backwards when he went into politics”.

The reception concluded with a performance by the band.