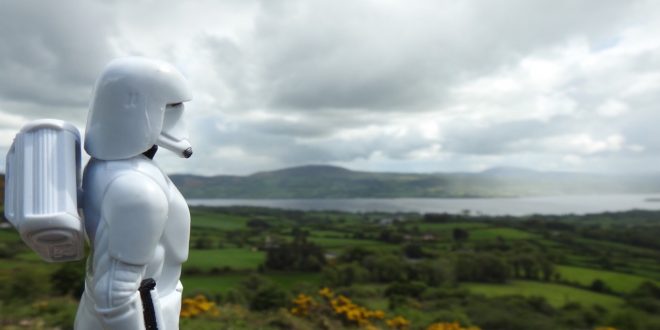 Share
PEOPLE who Google Scariff from now on could be directed to a galaxy far, far away as a planet with the same name is to feature in the eagerly-anticipated Star Wars: Rogue One film.
Filming for the eighth instalment of the Star Wars franchise took place in West Clare in May. It took the county by storm and it seems Clare’s association with Star Wars is set to continue with this latest announcement.
Director Gareth Edwards revealed that the upcoming Star Wars: Rogue One would feature the planet Scarif at the Star Wars Celebration event in London recently. He outlined it is based on a paradise world and that they had to go to a paradise to film it. Sadly, East Clare lost out in this regard, as filming was done in the Maldives. However, that is not to say that Scariff won’t benefit from this latest revelation, as locals believe it has firmly put the town on the galactic map.
East Clare Tourism representative Eoin O’Hagan said he has already had stormtrooper sightings in the area and he said the group hopes to take advantage of the hype surrounding the film.
“I think Scariff being mentioned as a planet in the Star Wars franchise is going to be big news for East Clare and for the town of Scariff itself because we all know that Star Wars is a fixation with people and the fact that we will have a town in East Clare in the franchise means people are going to come and people are going to want to come,” he said.
In addition to Scarif featuring as a planet in the franchise, EA Games announced that this December it will release the fourth and final expansion pack to Star Wars Battlefront, entitled Star Wars™ Battlefront™ Rogue One: Scarif.
Eoin believes it has to boost the area’s profile, as anyone who carries out an online search now for Scarif will also find the East Clare town.
As for the inspiration for naming the planet Scarif, Eoin speculated that it could have happened while filming was taking place in Ireland.
However, he said whether it was Scariff in East Clare or Scariff in County Kerry that caught the producers’ imagination, who knows. Either way, he said, “Star Wars has put us on the map”.
By Carol Byrne
Share

Carol Byrne is a reporter at The Clare Champion newspaper reporting on news in the East Clare area and the arts. She also covers the courts in County Clare and has received seven national awards for this coverage from the Law Society of Ireland and a National Lottery Local Ireland national media award for Best Community Story 2019. A Masters in Journalism graduate of NUI Galway, she also holds a Bachelor of Arts from the University of Limerick in Music and Media Studies, and a Higher Diploma in Irish Legal Studies. She began her career interning at The Limerick Leader and Clare FM, before taking up a full time post at The Clare Champion in 2006.
@@Carlsburn
Previous Cheaper to buy than rent in Clare
Next Division 2 league honours for Broadford