Home » Sports » Stalemate as football quarter-final is not played 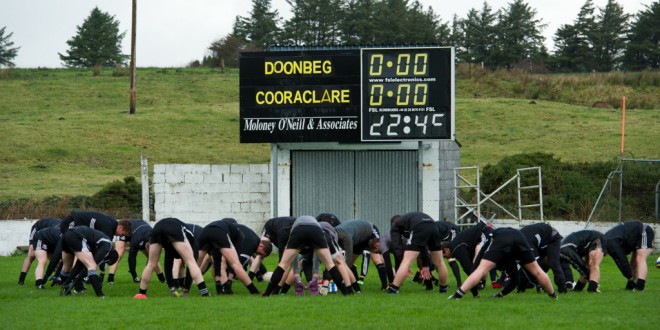 Doonbeg players warming up at Kilmihil for the county football quarter final which didn't take place because Cooraclare didn't turn up and Doonbeg themselves eventually didn't take to the field. Photograph by John Kelly.

Stalemate as football quarter-final is not played

WHEN is an apparent walkover not a walkover? Possibly when the team benefiting from said walkover won’t come out of the dressing room and say they don’t want it anyway.

Although the majority of people parking their cars in the Kilmihil GAA Club car park must have been aware that their visit would be a short one, they were keen to witness what turned out to be a rather intriguing non-event. Anybody who arrived in Kilmihil unaware that Cooraclare were not showing up would have realised that something was up when their entrance to the car park was free and, more significantly, when they detected the absence of county board gate checkers.

Doonbeg warmed up for their quarter-final against Cooraclare as if they were certain their neighbours were doing likewise at the far end of the field, on what was a wintry late October day. Knots of curious supporters from several clubs, including Doonbeg and Cooraclare, indulged in whispered conversations outside the dressing rooms, all the while keeping an eye on match referee Michael Talty.

Eventually, Talty, complete with umpires, took to the field at 2.15pm, which, under rule, had given Cooraclare 15 minutes grace. However, when Doonbeg didn’t emerge from the dressing room to take part in the bizarre GAA ritual of kicking a match winning score, opposed by nobody, Talty left the field to be told that The Magpies wouldn’t be emerging. They had re-entered the dressing room after their warm-up but when the players emerged again, they had togged in.

“I’d prefer to lose the match than give a walkover. I’d prefer to lose to Cooraclare today than accept a walkover,” Doonbeg manager Kieran O’Neill told The Clare Champion. O’Neill didn’t want to say too much but it was clear that Doonbeg sympathised with the situation Cooraclare found themselves in and, in particular, with Enda Considine, who’s father John was buried on Monday.

“With the help of God commonsense will prevail. It’s doom and gloom now but what can we do. In these circumstances we weren’t going taking a walkover,” the Doonbeg manager reiterated.

By then, the car park was emptying with the fate of Doonbeg and Cooraclare in the hands of the Clare County Board. This is where postponing all club games in Clare, from May to August, has landed Clare GAA. Clubs must take some responsibility for this, as it was they who franked the decisions at  meetings. However, it reflects very poorly on Clare GAA when a mere football match takes precedence over the death of a player’s parent.

When Clonlara sought the postponement of their senior hurling semi-final because of Domhnall O’Donovan’s work commitments abroad, they were rightly supported and a combination of the Clare County Board and Munster Council ensured that it happened. That was a commendable decision. Why then did the board and Munster Council not realise that there are times when GAA is secondary to life in this latest instance? Even if it meant that Clare would have no representation in the Munster Club Championship, Monday’s game should have been postponed. Bill Shankly was wrong; football is not more important than life and death.

West Clare native Peter O'Connell has worked for The Clare Champion for 12 years and covers everything from sport, especially GAA, news, features and has been even known to branch into the fashion scene on occasion.
@@westclarepage
Previous Minor title for Lissycasey
Next Hallowe’en Hobble