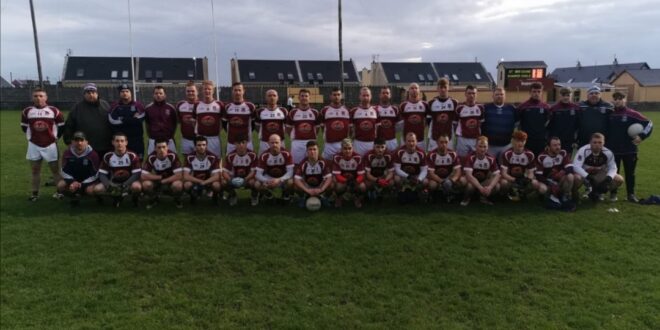 A masterclass from St Breckans veteran Pat Nagle and Minor Eoin Guerin secured the Junior B crown overcoming a team of Shannon Gaels veterans including close to a dozen of their 1997 and 1999 U21A and 1999 and 2002 Intermediate winning sides in Miltown on Friday night.  Even the most optimistic of Shannon Gaels supporters entering this tie were cautious about the possible story of this game with many of their side in the veteran stage of their storied careers against a youthful fast moving North Clare side. That said, St Breckans possessed men from the 1990s in Denis O Driscoll and Pat Nagle who were to the fore. Mikie Keating set the tone for St Breckans as he raced through for the opening score with less than a minute’s action. Eoin Guerin had the ball in the Gaels net after five minutes following a penalty won by Michael Hogan after being hauled down by Brian Bermingham. An ominous tone to the game was now been set as Shannon Gaels were unable to get out of the own half of the field as heavy rain took centre stage and Kieran Kennedy receiving a 10 minute black card.  The estuary side defended with honour and skill in depth but could not find the pace to get up into the final third of the field.

Brian O Shea was on the mark from play after nine minutes but scores from Guerin (2) and a well finished Shane Fitzpatrick goal for St Breckans left no one in doubt as to the reality of proceedings. When one felt that the floodgates would open and succumb  David Foley’s charges the Gaels rallied and slowed down the St Breckans onslaught as the winners managed only two further scores in the opening half courtesy of Pat Nagle and Eoin Guerin to leave the Tony McGann managed St Breckans (2-5) to (0-1) clear at the break.

The storyline continued as predicted for the second half as hat trick of points from Guerin and Nagle (2) surged St Breckans 13 clear five minutes into the second half as both sides began to empty their benches with 25 minutes remaining. A brief highlight for the gallant Shannon Gaels arrived when one of their greatest servants John Paul O Neill hit the net in the 42nd minute. Ten points was the difference when the second water break ended. Once more Shannon Gaels were on the offensive but suffered a drought in the attacking stages. The last four scores of the affair fell to Pat Nagle as he showed touches that would not be out of place at a higher grade

After the game Clare county board Chairperson Joe Cooney presented the Junior B cup to St Breckans Captain Seamus Hurley.