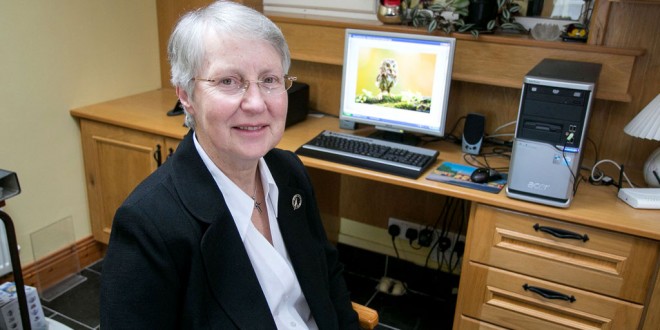 WHEN Sister Mary O’Connell retired from teaching business studies and accounting at Kilkee Community College last year, it marked the end of a 136-year link between the Sisters of Mercy and education in the town.

Sr Mary, who completed her Leaving Certificate in 1966, taught in Kilkee since 1980, having had previous stints in Nenagh and Tulla. She served as deputy principal in Kilkee since 2006.

“It’s a good stretch. It has been a good life,” Sr Mary reflected recently when The Clare Champion visited. She still lives in the nuns’ house on the Miltown Malbay road in the town.

She feels and hopes that she grew into her role since she first decided to enter the order as a teenager.

“Who knows what it is really? It’s one thing when you’re 17 and it’s another thing by the time you’re 37. Why wouldn’t it be because we grow and we change. We have another experience and then another one. Things change. I see it in the whole of my life with secondary school. Teenagers are just great. They haven’t accumulated the cargo yet and you can always get around them. If you give up, then you’ve given up but you’re the adult, so you just keep at it,” she observed.

Working with teenagers all of her adult life has helped to keep her fresh and in touch.

“It has to because if you don’t, they’re going to change. Mobile phones arrived. I still remember the day we went to the cross-country in Waterford. We had a bus at the time that we got from the VEC. It was about 1997. They were sending requests to the local radio stations of the places that we were driving through. The first time I went, I didn’t know what was going on. I was driving the bus but I didn’t know where it was starting or finishing,” she recalled of that trip to Dungarvan.

Given that Kilkee is the mostly westerly secondary school in Clare, having a VEC supplied bus, driven by a teacher, was cost-effective and practical. Sr Mary stepped forward and literally put the foot down. Students under her tutelage often visited the Burren Outdoor Education Centre and she still remembers a long drive up and down to Antrim.

“I just decided that I had to pass this wretched driving test because I couldn’t be going after another £50. We had youngsters that were involved in a European project. They had to spend from Thursday to Tuesday in North Antrim so we put our six youngsters into the bus. I was on a provisional licence but you could drive. I drove to Antrim and down again. That was in 1992. On the way home Angela Rahill, who was the other teacher with me, sat back into the seat and took off her shoes. She put her feet up and took out the book of rules. She did the book of rules the whole way down. My head was splintering.”
The few days in Northern Ireland were eye-opening.

“It was a spooky enough kind of thing. This girl, whose dad was a minister, was sure and certain that all Catholics had hoofs. This was in 1992. Then there was a concert. We had a Catholic and Protestant school from Belfast, us and a Donegal school. ‘Ireland’ was going to whatever room it was to get ready. Nobody moved. The Donegal people understood that the Belfast schools would make the move. But they just looked at the floor. I looked at Angela and said ‘we’d better get up’. She said, ‘what are we going to do?’ I said ‘We’ll teach them the Siege of Ennis. And we’ll teach it all to them.’ That was what we did.”

Mary was educated at Killimer National School but spent three months one winter in Connemara.

“I went to Connemara for three months when I was 10. I never saw anyone from home for the three months but they wrote to me. I went to school every day in a school where everybody spoke Irish. It was a 15-teacher school in Carraroe. I came out of a one-teacher school in Killimer. When I talk about it now, my nieces and nephews think it was cruelty but I don’t remember being lonely. I wrote home every week and mam was great to write.”

Sr Mary had a “touch of dyslexia” which was never properly diagnosed when she was a child.

“I never got the sums right and the spellings were atrocious,” she said.
That helped her to keep an eye out for children she taught who were clever but perhaps didn’t realise it.

“Through my time at school, I’d have met very bright kids and they just presumed that everybody sees it as clearly as they do. That’s not how it is. I think of two or three in particular and you couldn’t convince them that they were as bright as they were,” she recalls.

Although retired from teaching, Sr Mary still goes to school matches but enjoys the free time she has now to attend the West Clare Drama Festival in Doonbeg, for example.