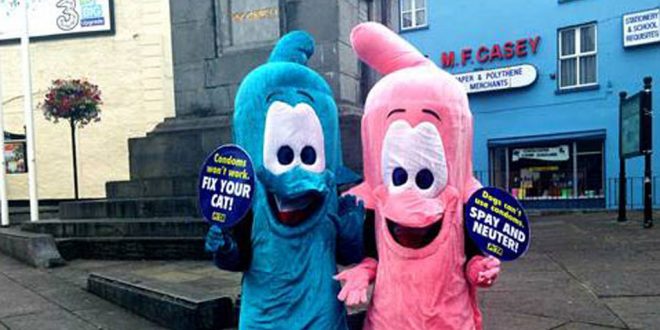 Highlighting the need for spaying or neutering cats and dogs.

Spay and neuter message in Ennis

PETA (People for the Ethical Treatment of Animals) members dressed as giant pink and blue “condoms” and holding signs that read, “Dogs and Cats Can’t Use Condoms: Spay and Neuter!” descended on Ennis today (Monday).

Their message? Five homeless dogs are euthanised every day in Ireland, and the only way to manage the cat and dog overpopulation crisis is to have animal companions spayed or neutered.

“Hundreds of thousands of unwanted cats and dogs suffer on the streets of Ireland every day, and most will never finding a loving home”, says PETA director Mimi Bekhechi. “Dogs and cats can’t wear condoms, so PETA is calling on guardians to take responsibility and spay or neuter their animal companions.”

PETA – whose motto reads, in part, that “animals are not ours to abuse in any way” – notes that every year in Ireland, thousands of unwanted cats and dogs enter animal shelters, and many of them are euthanised because there simply aren’t enough good homes. Many more never make it to an animal shelter and are left to fend for themselves on the streets, where they are subjected to cruelty, are struck by cars, or suffer from starvation, extreme temperatures, disease or injuries.