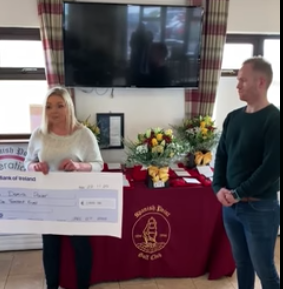 A WEST Clare woman’s dedicated efforts to boost her health and fitness have secured her a top prize in an annual wellness initiative run by Spanish Point Golf Club.

Doreise Power, who is from Quilty and now lives in Mullagh, took part in a ten-week initiative running alongside Operation Transformation from January to March this year. While the pandemic put paid to plans for a gala presentation night, a lower-key presentation was made recently to a delighted Doreise.

Mervin Hehir of Spanish Point Golf Club said the local Operation Transformation initiative was aimed at making a difference to people in the dark months of the year, and about creating activities for the whole community.

“The golf club is community owned and we wanted to take away any suggestion that clubs are stuffy places,” he explained. “That’s why, last year, we decided to run a 10-week programme alongside Operation Transformation on RTÉ. We really wanted to help people learn about fitness and nutrition and to boost their mental health. January and February can be tough months for people and we’re very aware of that.”

The initiative, which ran for the first time last year, proved to be a major success, securing celebrity backing, as well as a health number of participants.

“We got the programme off the ground in 2019, with the support of figures including Marty Morrissey and we had 35 people taking part. We wanted to do something positive for the area and the feedback was really great. Our winner last year was Martin O’Connor and we held a gala night at the Golf Club for his presentation.”

This year, more than 50 people from across the county took part in Operation Transformation under the guidance of Jonathan Hickey and Ezra Guilfoyle on the fitness side. Expertise on nutrition came from Armada Head Chef Peter Jackson, with additional classes on mindfulness and talks on mental health and fitness.

“We ran the fitness classes in the hall of St Joseph’s Secondary School and the principal, Paul Reidy joined the programme this year, which we were delighted with,” said Mervin. “We really hope that everyone who has taken part to-date will get some long-term benefits.”

This year’s winner, Doreise, was chosen for her hard work and the initiative she took in embracing the programme. “Doreise really gained confidence and self belief and she was really surprised and delighted to win,” Mervin noted. “Jonathan selected her on the basis of her efforts and the progress she made over the ten weeks.”

Jonathan Hickey, who has posted a number of the participants fitness journeys on social media said: “When I first started working with Doreise, I remember seeing her come through the door at Spanish Point Golf Club, very shy in herself, getting in quick and out even quicker. As the weeks passed, I noticed how Doreise’s confidence started to change and that was only the start for this lady. The pounds started to fall off with her hard work and determination, through fitness classes, nutritional guidance and leisurely walks.”

While Covid-19 means the future of the programme is currently uncertain, there is hope it may return at some point next year.

“Everyone wants to know if we’re going to run Operation Transformation in 2021,” said Mervin. “We haven’t ruled it out and we’re looking at how things will go early next year. We might look at doing something a bit later. A big part of what we do is social and the connections people make when they’re in classes together, so we’re hoping that that kind of thing will be possible later in 2021.”

Fiona McGarry joined The Clare Champion as a reporter after a four-year stint as producer of Morning Focus on Clare FM. Prior to that she worked for various radio, print and online titles, including Newstalk, Maximum Media and The Tuam Herald. Fiona’s media career began in her native Mayo when she joined Midwest Radio. She is the maker of a number of radio documentaries, funded by the Broadcasting Authority of Ireland (BAI). She has also availed of the Simon Cumbers Media Fund to report on development issues supported by Irish Aid in Haiti. She won a Justice Media Award for a short radio series on the work of Bedford Row Project, which supports prisoners and families in the Mid-West. Fiona also teaches on the Journalism programmes at NUI Galway. If you have a story and would like to get in touch with Fiona you can email her at fmcgarry@clarechampion.ie or telephone 065 6864146.
Previous Deputy McNamara requests Government to consider Covid-19 Antigen tests
Next Clarecastle Tidy Towns clean up in national photography competition