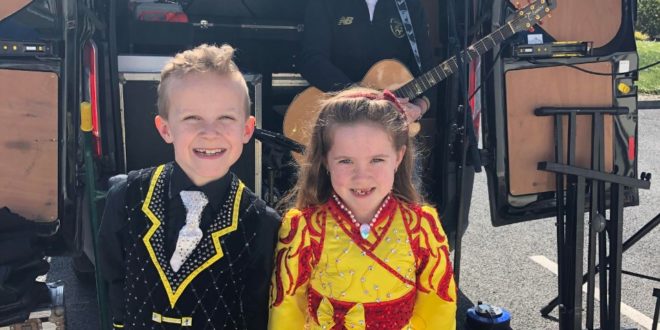 AS visiting restrictions remain in place at the country’s nursing homes, staff at St Theresa’s in Kilrush pulled out all the stops to lift the spirits of residents and staff with a musical celebration of Easter.

On the Tuesday of Easter Week, residents went to their windows to hear the music of the hugely popular Patrick Roche, and watch the dancing of Tadhg and Saidhbh Moroney, the son and daughter of the Director of Nursing, who were able to perform outdoors in the fine weather.

“Patrick’s mum is one of our residents,” explained Yvonne Moroney. “His band is so popular and we were delighted that he was able to come and play for us. There was huge excitement and his performance cheered everyone up so much.”

Tadhg and Saidhbh, aged 9 and 8 respectively, attend the Michael Donnellan School of Dancing in Ennis and, in normal circumstances, would be popular visitors at St Theresa’s.

“Before the restrictions, they would have been used to coming in regularly and residents loved to see then. Over the last few weeks, they’ve all missed the dancing, so when we got the spell of fine weather, we were able to arrange for the kids to dance outdoors and everyone was delighted.”

The celebration of Easter was combined with an event to mark a major birthday for one of St Theresa’s residents. “Joyce Heppell who is from Doonbeg turned 99 on April 14, so we marked her birthday and her son Brian was able to join in, from a safe distance. It was great to be able to boost morale for everyone. The visiting restrictions are tough for residents. Everyone is facing some kind of challenge, and even kids are finding things hard at this stage, but we were able to show that there is light at the end of the tunnel and to lift everyone’s spirits.”

Fiona McGarry joined The Clare Champion as a reporter after a four-year stint as producer of Morning Focus on Clare FM. Prior to that she worked for various radio, print and online titles, including Newstalk, Maximum Media and The Tuam Herald. Fiona’s media career began in her native Mayo when she joined Midwest Radio. She is the maker of a number of radio documentaries, funded by the Broadcasting Authority of Ireland (BAI). She has also availed of the Simon Cumbers Media Fund to report on development issues supported by Irish Aid in Haiti. She won a Justice Media Award for a short radio series on the work of Bedford Row Project, which supports prisoners and families in the Mid-West. Fiona also teaches on the Journalism programmes at NUI Galway. If you have a story and would like to get in touch with Fiona you can email her at fmcgarry@clarechampion.ie or telephone 065 6864146.
Previous Covid-19 cases continue to rise in Clare
Next “Absolutely over the moon” Corofin musician allowed off Ruby Princess

IRISH Water, working in partnership with Clare County Council, is to carry out essential works …