Home » Sports » Sixmilebridge had no answers 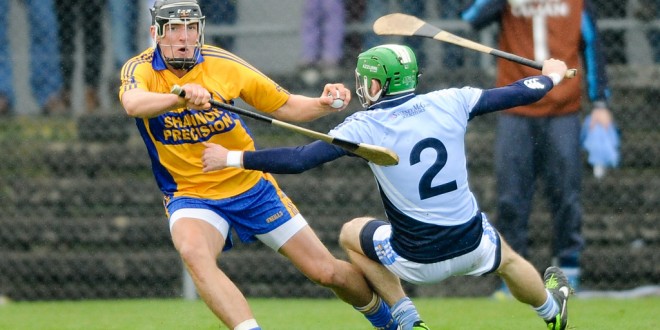 Shane Golden of Sixmilebridge in action against Cathal King of Na Piarsaigh during the Munster Club Championship final at Cusack park. Photograph by John Kelly.

Sixmilebridge had no answers

Sixmilebridge’s dream of a fourth Munster club senior hurling title was well and truly buried at Cusack Park in Ennis when they had no answer to the power of their Limerick counterparts Na Piarsaigh.

Before an attendance of 3,689, the Clare champions were beaten in all sections and Na Piarsaigh had secured their place in the All-Ireland final long before the final whistle sounded.

Managed and coached by Sixmilebridge man Sean Stack, the Limerick champions dominated in almost every sector and they led from the first minute when Kevin Downes found the net in their first attack.

They were six points clear at half time when the score was 1-8 to 0-5 and any hopes of a Sixmilebridge fight back were rocked thirty seconds after the resumption when the visitors had their second goal, Kevin Ryan deflecting a Shane Dowling delivery past Derek Fahy.

Goal number three arrived just before the end of the third quarter and it killed off any remaining hope of a sixmilebridge fight back. The win marked Na Piarsaigh’s second Provincial title in three years after they beat Crusheen in the 2011 decider in Thurles, the first time they qualified to compete in the competition.

Afterwards an emotional Sean Stack paid tribute to his charges and went on to say that their target is the All-Ireland title.

Meanwhile, on what was a disappointing day for Clare GAA fans, Scariff-Ogonnelloe’s bid to win the All-Ireland junior camogie title failed when they went under to the defending champions, Myshall from Carlow at Kilcormack in Offaly.  The final score here was 3-9 to 0-8 in favour of the Carlow club.

Coolmeen’s bid to reach the Munster junior football final ended at the home of Limerick champions Feohanagh-Castlemahon in Coolyroe in West Limerick where they suffered a five point defeat, 0-16 to 1-8.

Hopes of Munster club success now rest with football champions Cratloe who will face the hottest of hot favourites Dr.Crokes in the Provincial decider next Sunday