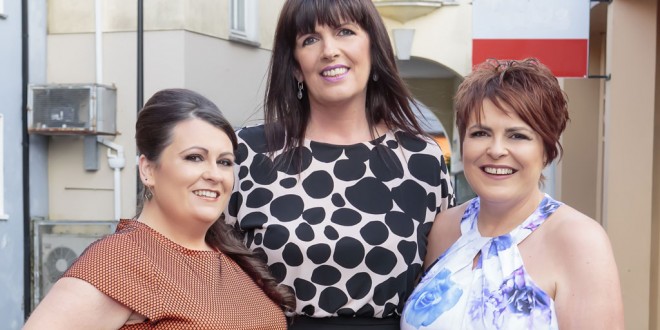 Ann O’Sullivan and Bernie Bennis, both from Ennistymon, joined Slimming World in Ennis last October after a trip to the doctor showed the toll Ann’s weight was having on her health.

“Initially, I didn’t realise I had put on so much weight. I got a terrible shock when I stepped on the weighing scales on October 9. What happened was like everyone else, you get married, you are cooking, you are picking at food and my GP said it was time to do some bloods. We did the bloods and my cholesterol was just slightly over 5. That is how it happened.

“I went back to get the results of my cholesterol and it had jumped to 6.4. So she gave me an ultimatum saying I had to either had to drop the weight or take the medication,” Ann recalled.

Ann still remembers the moment she stepped on the scales last year. “Shock wasn’t the word for it. To be honest, I was actually horrified with myself that I had let myself put that much weight on. I suppose, over the years, you don’t take that much notice of it. You are just getting on with life and, unfortunately, it just creeps on and I genuinely thought I was just 14 or 15 stone at most, until I stepped on that weighing scales that night and I thought ‘Good God almighty’,” the 5ft 3 1/2in Corofin resident recalled.

Since then, Ann has dropped four to five dress sizes. “I have never looked back. It has really worked so well for me and I just feel like a totally different person, like my old self again,” she said.

“I have so much energy. I am walking everywhere. I completely feel healthier and fitter. We have even joined a gym now. It is brilliant. I would have never dreamt of this. I would have had to park the car right outside the door of a shop before whereas, now, my back is better, my knees are better because I have a touch of arthritis in the knee and, overall, I am much, much healthier. My cholesterol is 4.6,” Ann revealed.

“To have been someone who had the weight I had, to go to what I call a normal person again, it really does change your outlook on everything in life. I can’t explain it,” she added.
Ann believes losing the weight and becoming healthier has “changed my life. It has made me a completely different person. I feel like the young teenager I used to be and if I can do that, anyone can.”

When she met her “soulmate” Conor O’Sullivan, Ann was just over eight stone. When they married in 1992, she was nine stone 7lbs. Her target weight is 11 and a half stone but the 44-year-old revealed she had another goal in mind until very recently.

“Initially, I wanted to be able to fit into a pair of Tommy Hilfiger jeans without having to put Spanx on, or without having to wear a top hanging out over it. That was my initial goal but I will be honest, I was in Dublin a few weeks ago and I saw a dress and it was in a shop I had never walked in the door of before in my life. It was Coast. I went straight into the fitting room and tried it on and came out and thought ‘forget the jeans, this is the dress’. To be able to wear dresses, the only dress I have ever worn was my wedding dress or a long maxi-dress to cover myself up, to wear a dress and not having to be self conscious or to wear underwear that is pulling you in, it is brilliant,” she said.

Ann’s sister Bernie has experienced a similar transformation. “My sister came to me and said ‘I’m going to Slimming World, do you fancy coming with me’. I said ‘sure look, I’ll give it a shot’. I basically went as support for her but it has kind of worked out in my favour,” Bernie remembered.
She was 19 stone 3 pounds at the time but says she didn’t feel overly conscious of her weight. “You become set in your routine and convenience foods and takeaways and all of that kind of stuff. Food came second to everything else that was happening and I just piled on the weight,” she said, adding, “Every year was another stone or a stone and a half and before you knew it, you were the size of a house.”

Bernie was between sizes 24 and 26 in her 20s and admits to having “locked myself away because of my size. The comments you would get when you go out weren’t very nice either. They wouldn’t say it directly to you but you would hear them”.

“Clothes were something you had to wear. I had no interest in fashion because nothing suited me because I was too big, whereas shoes and handbags and perfume and stuff were no problem because they fit, no matter what size you are,” she outlined.

“You do care but it is a vicious cycle because if you are like me, I comfort eat. So you get depressed because you are overweight, so you eat and like everyone else, you say ‘I’ll start on Monday’ but then Monday comes and you don’t start. Then you say well I might as well leave it for another week and it becomes routine. You get into a rut where you say, ‘so what if I have another bag of Taytos, the damage is done’.

“The amount of weight I had to lose was so much, I was thinking of the end, instead of slowing down and thinking if ‘I slow down and take a pound at a time it is a lot easier than looking at the total’,” Bernie said.

Last week, the purchaser weighed in at 12 stone eight pounds and believes the change in her body shape has done wonders for her self confidence.

“You don’t feel as conscious walking down the street. People looked at you and kids, they are innocent and they don’t understand it, they would say ‘mammy look at the size of her’ and you feel like ‘oh God let the ground open up and swallow me’. Now people look at you because you are looking so good and I kind of prefer this look,” Bernie said.

“I wish the way I feel now – I’m not finished, I still have a way to go yet – I wish I could give that feeling to someone who was in my position 12 months ago. It is crazy. I feel like nothing is as much of an effort as it used to be.

“Things that don’t mean much to some people, like tying your shoes or painting your toenails, when you are carrying an extra six and a half stone around your waist, it is totally different, it is an ordeal,” the 31-year-old added.

Ennis-based Slimming World consultant Elizabeth Anderson has praised the two women for their commitment and described them as “an inspiration” to others.