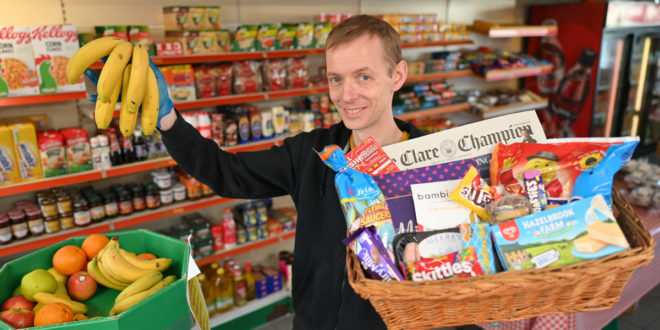 Stephen Coote with a basket of items that were donated for "random acts of kindness". Photograph by John Kelly

AS is so often the case when campaigns of any sort begin, it was one single incident that led to the random act of kindness phenomenon that has unfolded in an Ennis shop. It is yet another example of how people have rallied around to help each cope with the restrictions imposed as a result of the Covid-19 pandemic.

Stephen Coote, owner of Cootes shop and bakery at Cahercalla Cross on the Kilrush Road, is amazed by the number of people that have been drawn to the notion of “strangers helping strangers” though their local store.

Trade at Cootes has been badly affected by Covid-19, as there is no activity at the Éire Óg GAA grounds across the road and nearby St Flannan’s College is closed

The random act of kindness idea began on Easter Saturday, April 11, when the Covid-19 regulations were being ratcheted up.

Stephen said, “A woman who was out for a walk came into the shop and left her son outside. She bought chocolate for €9.95 or something, and then got the boy to come in and pick a number between one and 10. I think it was eight, so when the eight customer after her came along, it was a woman, I gave her the chocolate. She got very emotional when I told her how this had come about.

“This lady posted the story on Facebook and it was shared and liked. It took off after that and we’ve had up to 20 people a day buying biscuits and cakes, scones, tarts, strawberries and Lotto tickets. Even customers are buying ice cream for children outside the shop,” said Stephen, who is assisted in running the shop by his mother, Mary.

Stephen described how the first thing on a Sunday morning a gentleman dropped in €20 in an envelope with the hope that it would make a healthcare worker smile. “The lady that received this was over the moon,” he said.

A lot of the random acts of kindness have been acknowledged on Facebook.
One woman posted, “This is amazing, hope it’s going to be known as the Kindness Pandemic, as its goodness vibes seem to be escalating.

“Thank you so much to Deborah for the lovely gift I received in this envelope [cash] today on my trip to the Cootes’ shop. Greatly appreciated and paid forward,” another person said.

Fresh fruit was a nice surprise for several customers. “Thanks very much to the lady that gifted strawberries to customers in Cootes this morning… me being one of them. There is such kindness around at the moment!”

Another said, “Not only is Cootes shop and bakery the best local shop, but it also has the kindest customers! Thank you to the lovely person who pre-paid for this (gorgeous) apple tart. You made my day and inspired me to do something similar.”

Stephen said while people who wanted to pass on a gift have their own way to select a receiver; the next person in the door or a man or woman over a particular age, many leave it to the staff to make the decision.

“We give a gift to people who we think need something or maybe as a small token to somebody who is a regular customer for cake or tarts.

As a local shop, we know everybody in the area and it’s fantastic that so many of them are getting involved. With two doors and two places outside where people can have a chat at the recommended distance, this idea has created plenty to talk about,” he said.

The many acts of showing kindness to strangers has put the already well-known shop “on the map” because of the Facebook following it has built up.

“It hasn’t cost us anything and it’s been good for business,” said Stephen, adding that other shop owners in Ennis had approached in with a view donating vouchers for Cootes’ random acts of kindness.