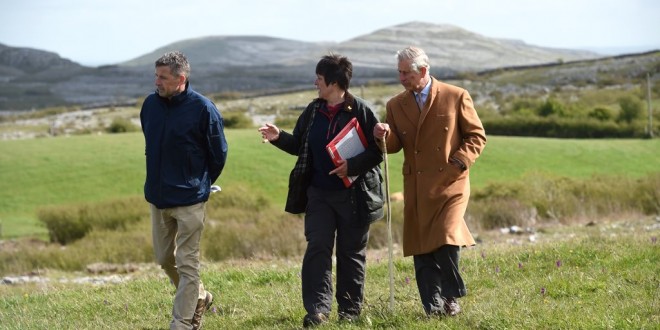 Liverpool was the location for a major tourism business networking event this week, where there was a great opportunity to showcase Ireland.

The visit of Prince Charles to the Burren last week gave North Clare an edge in noting it as a destination.

More than 300 top international buyers from 40 different countries, including Australia, China, India, Japan, Brazil and Russia, were provided with a wealth of information about the island Ireland at ExploreGB 2016.

As part of its ongoing partnership with VisitBritain, Tourism Ireland – together with 18 Irish tourism companies, including Doolin2Aran Ferries – took part in ExploreGB, VisitBritain’s flagship international event which took place in Liverpool.

The two-day workshop involved a series of pre-scheduled, one-to-one appointments – showcasing Britain and the island of Ireland to an influential audience of international buyers and helping to deliver additional itineraries and brochure pages featuring both destinations.

ExploreGB was also an ideal opportunity for Tourism Ireland to highlight the British-Irish Visa Scheme to buyers in attendance from China and India; the scheme enables leisure and business travellers from both countries to visit Ireland and the UK on a single visa.

Niall Gibbons, CEO of Tourism Ireland, said, “We work closely with VisitBritain, particularly in long-haul markets like China and India, to target people travelling to Britain and encourage them to visit the island of Ireland as part of their trip, and vice versa. A key message for us to buyers from China and India is the British-Irish Visa Scheme, which enables visitors from those countries to visit both Ireland and the UK on a single visa of either country.”