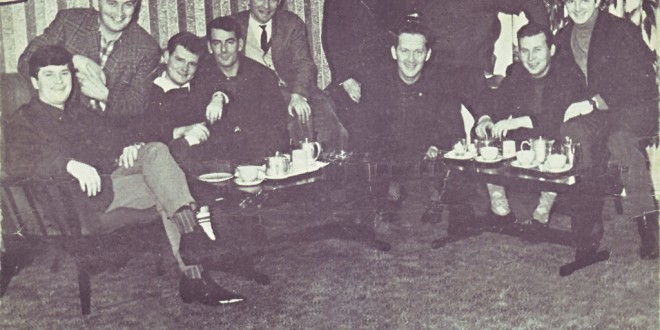 Showband airs in the Áras

AS HEAD of the students’ union in UCG, Michael D Higgins was not too far removed from the showband scene and a town closely associated with that famous era.

More recently, and now as President of Ireland, he was brought down memory lane and reminded of what the showbands meant to places like Tuam.

Names of famous showbands and musicians were recalled when he visited the Galway town, at the invitation of a local committee, to honour a person who, more than anybody else in the town, was responsible for sending hundreds of musicians on the road.
All were well capable of playing with the best, whether it was with  showbands, garda or army bands from the late 1950s.

President Higgins also attended the launch of a new CD, featuring the best of local showbands.
Since receiving a copy, the precints of his residence, Áras an Uachtaráin in Dublin’s Phoenix Park, echo to the sounds of some of the famous  groups that made Tuam the western capital for showbands.

However, the main reason for the president’s visit to the town was  to unveil a plaque honouring the late Danny Kelly senior, who, as band leader, conductor and tutor for the Tuam Brass and Reed Band, was responsible for teaching hundreds of  young musicians, many of whom went on to make their career as professional entertainers.

Danny came to Tuam in or around 1950 and, following consultations with the parish committee, agreed to teach music to the young people of the town. On December 22, 1950, the Tuam Brass and Reed Band was formed and more than 80 young people were enlisted as members.
The band kept going until the 1970s and, in its first decade, more than 500 young people learned music under Danny Kelly.  He produced some of the best musicians in the country.

President Higgins unveilved the plaque in the parochial centre, the building where the brass and reed band rehearsed.
The launch of the CD was also part of the tribute to the late Danny Kelly Snr. Entitled Thank You for the Music, Mr Kelly, the CD, with a booklet providing details on the members of the bands, features all of Tuam’s top showbands of the time and brass players who were taught how to read and play music by Mr Kelly.

The launch, which followed a civic reception, was performed by the Mayor of Tuam, Imelda Kelly, who also had close ties with the showband scene as her father, Miko, managed the great Johnny Flynn Showband from Tuam and the local Las Vegas ballroom.
Johnny Flynn was the top band to come from Tuam and was one of the best in the country. For years, they packed famous ballrooms all over Ireland,  Great Britain and America.

A favourite venue within County Clare was Paddy Con’s (New Hall) ballroom, Ennis, and a great annual event was the annual dance for the County Clare Agricultural Show Committee, on the traditional date of August 15.

In its heyday, Tuam boasted at least five major showbands, as well as a few more who also made a name for themselves.

They included the Johnny Flynn Orchestra, later to be known as the Johnny Flynn Showband, Ollie Maloney Showband, Gerry Cronin and the Ohio, The Bandits, The Raindrops, The Millionaires, The Liam Ivory Band, Gerry and The Fleet, Frankie Carroll and The Ranchers and The Problems.
Some of the big hits enjoyed by the Tuam bands can be heard on the recently launched CD. Gerry Cronin and the Johnny Flynn Showband  are featured with their first ever recording, You Took Her Off My Hands. It was recorded in New York in 1963  by the famous ballroom  proprietor, Bill Fuller.  However, it was never  released because of technical difficulties.

Also  on the CD are the Tuam Showband Show, with Paul Keating of the Ohio, Tommy Ryan and The Bandits, Oh My Papa with trumpeter Ollie Maloney and the Ohio band, Southern Dixie Flyer with Kilrush-born vocalist Rickie Keane and the Ollie Maloney band, Daddy Sings Bass (Frankie Carroll and the Ranchers), Those Brown Eyes (Paddy Higgins and Country Folk), Bottom of the Mountain (Gerry Cronin and the Ohio), Where the River Shannon  Flows (Kevin Eagleton and the Paramount),  If Those Lips  Could Speak (Mick Keane and the Paramount), Be My Guest (Chris Mullahy and the Indians), Scumann Ride (Eamon, Tommie, Willie and the Bandits), all on disc one.

On disc two are A Song for Danny Kelly (Padraig Stephen and The Shambles), Ring of Fire (Gerry Cronin and Ohio), Who Knows (Roy Donn and the Johnny Flynn Band), Banna Strand (Pete Creighton and  Johnny Flynn Band), Come A Little Closer (Tommy Walsh and the Graduates), A Holiday Romance (John Keating and the Carousel Showband), Higher and Higher (Jerry Fahy and Fleet), My Little Lady (Eamon Ryan and The Bandits), Long Lonely Road (Kevin Kealy and the Pete Brown Band), So What’s New (Tommy Wade and Ollie Maloney Band), Give My Regards to Mary (Jimmy Flynn and the Ollie Maloney Band), Masons Apton (Raindrops and Brendan Mulhaire), Put Another Log On The Fire (The Big Time), You’re Cheating Heart (West Coasters featuring The Dunne Brothers, The Swal of Galway Grey (Liam Ivory Band) and Beyond the Sea (Jimmy Higgins and The Millionaires).

Jimmy Higgins, from Galway, who published his own history of the showband era, Are Ye The Band, is a well-known musician, having started  playing trumpet with the Paramount in 1960 and, afterwards, with the International in Manchester.
Singled out by President Higgins on his visit to Tuam, Jimmy joined The Millionaires in Dublin in 1965, before moving back to Galway to join Chris Grace and The Raindrops.

He also featured with Big Time, Horizon, Liam Ivory, Gerry Macken, Black Magic and Raindrops.
A regular presenter with Galway Bay FM, Jimmy Higgins is responsible for the music production on Thank You For The Music, Mr Kelly and for the information on the bands, while Kevin Dwyer, also of Galway Bay FM, directed the project which was spearheaded by the Tuam 400 Committee and the Thank You For the Music, Mr Kelly project committee.

The music was remastered and digitised by Kenny Ralph of Sunset Studios and the accompanying booklet was designed by Michael Dwyer.

Already regarded as a collectors’ item, the CD is limited to 500 copies, with all profits going to the Care For Shane charity.
Some copies are still available from Quinn’s shop in Tuam. To order, call all 093 26060.