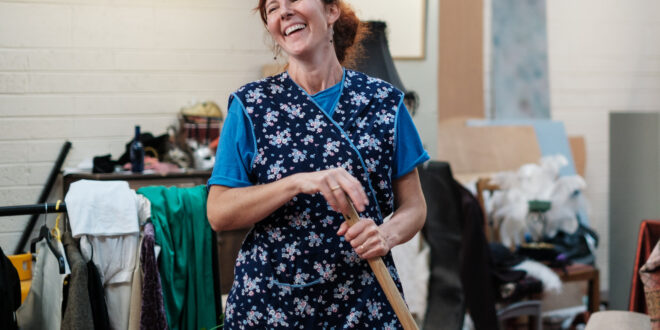 Saoirse Byrne in rehearsals last July for the play Mrs Sorken directed by Paul Corey. This play is available on the Ennis Players website.

THE show must go on for the Ennis Players despite Covid-19. This would normally the time of year when the Players would be tidying up from another year of Supper Theatre Productions. This year has been a very different year but in the true spirit of the Ennis Players, and with adherence to social guidelines, they have come through with a play which will be available to view on their new and reworked website page this Thursday.
“It was an opportunity that could not be ignored,” says the newly appointed Chairman of the Ennis Players Committee Paul Corey. “We wanted to do a little give back for all those who have supported us throughout the years. Obviously it was not without its challenges due mainly to the Covid crisis but it was a chance to simply say ‘Thank You’  to everyone from our patrons to those who gave us raffle prizes and our audience in general.”
Mrs Sorken written by Christopher Durang and directed by Paul Corey is a comedy with a cast of one, the delightful Mrs Sorken played by the talented Saoirse Byrne.
“I really enjoyed  the whole project,” said Saoirse, “it was certainly very different performing a monologue and using cameras”.
Mrs Sorken is a middle aged lady who hails from the Liberties. A neat and reserved lady who has being going about  her job  in this particular theatre for sometime, but on this evening as she goes about her arranging  and dusting on the theatre stage a notion assaults her as a spotlight falls and she begins to tell an empty auditorium her thoughts on love, life, living and photo synthesis. Shy at first she warms to her various subjects which jump and hop about but ultimately knit themselves back together into a mix of beautiful colours. What follows is the comedic and endearing workings of an ordinary woman with an extraordinary mind. A woman who has suffered and lost but also a woman with strength and resolve gifted with the noble ability to tear apart and find connections through words.
“She did not develop as the  character I initially expected her to be and Paul loves to experiment,” said Saoirse, “but a much more likeable Mrs Sorken came to be and this continued every time I read her”.
She continues, “It’s interesting how external circumstances can colour you view of a character and then the layers start to fall away”. “Although”, she laughs, “I’m pretty sure I deafened Paul with my voice projection having never been used to using a mic before”.
While Paul has been making and directing short films for quite some time, most recently having appeared on Nationwide with an Ennis during Covid documentary, this was a first for Saoirse.
“The process of making of short film is an interesting journey, and more so in the developing Mrs Sorken. This is because  she starts out unsure of herself and faltering but her confidence soars with each line she delivers to an imaginary audience despite hints of an unhappy marriage,” she says.
In bringing  about this short film both Paul and Saoirse feel that  along with recent reports of rising domestic violence during lockdown they are acutely aware of those who have suffered. “This was an aspect to the character that was not immediately clear on the first few readings,”  said Saoirse.
The play was filmed in glór, a theatre which holds a lot of wonderful memories for everyone in Ennis Players, and despite the strangeness of playing to an empty audience all are agreed it was a unique experience. The Ennis Players paid tribute to glór for the use of the space, Nik Bromfield for his time and expertise in lighting, Laura O Brien for her support backstage and Ciara Devanney for sound recording. Mrs Sorken is available to view on www.ennisplayers.com from Thursday morning.