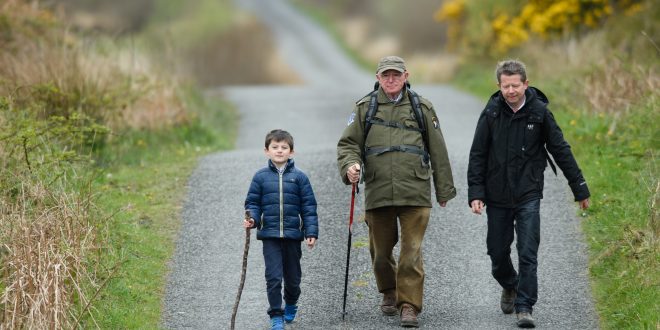 The Sheahan's Marcus, Michael and Paudie who have completed the ninety two miles of the Mid Clare Way over an number of Sundays in the past two years. Photograph by John Kelly.

THREE generations of the Sheahan family set out on a journey in February 2014. Their plan was to complete the Mid Clare Way in stages every fifth Sunday and this year they concluded their trek.

Ballybeg resident Paudí Sheahan, his 80-year-old father Michael and his seven-year-old son Marcus completed the entire Mid Clare Way earlier this year. Paudí’s other son Robert, who was 10 when they began, often joined them at various stages of the walk.

They could not believe all that they experienced – the beautiful scenery, woodland walks, lake views, quaint villages and towns and some of the county’s most interesting historical and archaeological sites – was available on their doorstep along the Mid Clare Way.

Paudí’s parents were always out doing something and routinely went walking every Sunday. However, when Paudí’s mother, Evelyn, died suddenly three years ago, he and his four brothers decided that they would each take turns and do something with their father every Sunday.

“Mam and Dad were very active, Dad still works six days a week at 80. He’s something else. When Mam, died we decided to do this then. It was like repaying Dad because despite how hammered tired he was, Dad would always bring us somewhere on a Sunday. They took off every Sunday to do precisely that type of walking. None of us really had any interest in it. Now it has come full circle and we take him somewhere. So every fifth Sunday, we said we would do a walk on the Mid Clare Way.

“What’s wonderful for the boys is it is golden time with their grandfather. They are compelled to chat and it is a lovely compulsion. It is also a very cost-effective way to spend a Sunday; pack the sandwiches and the tea and away you go. For other people, they come here and that’s their holiday; we have all this right outside. We were delighted to have done it.

It affords you time with each other that you wouldn’t ordinarily be given,” he said.

Paudí decided that they would walk the Mid Clare Way section by section, as he had previously seen the sign for the Mid-Clare Way on the Lahinch road and had always thought about walking it. He explained that it was the ideal way to start a journey like this, as the route was already mapped out for them.

“I’d only ever seen the signs where they intersected the main road and I thought we would give this a go. [Initially] it was just about a route so I didn’t need to pick one but from the very first Sunday we did it, it was a great gift,” he said.

He explained that they were hooked after that very first section and even his son Marcus, who started out aged five, was mesmerised by what there was to see along the way.

Every fifth Sunday, Michael travelled to Ennis to Paudi’s home and the group headed off with walking gear, a packed lunch and a camera to “get to know the county”.

Having completed the whole way, Paudí said he couldn’t pick a particular favourite part but said, “there is a favourite bit in every walk and that is when we eat”.
“I pack sandwiches and tea, etc, and Marcus would scout ahead to find a good place to eat. It would take us four hours to do a section and about an hour in we sit down to eat,” he outlined.

Paudí said Marcus must have put in a lot more miles than the rest of the group because he could scout so far ahead to find the perfect spot for a bite to eat. This might be by a gate, at the side of the road and once it was atop some bags of turf.
Paudí said that they never realised the history, heritage and stunning scenery available on their doorstep. While walking the Mid Clare Way, they came across a huge number of holy

wells.
“You are following in the footsteps of thousands of people who made pilgrimages over thousands of years,” he said, adding that it is like having The Camino Way on your doorstep.
While walking the route, they came across stunning scenery, such as the Waterfall at Lanna; churches and graveyards, historical sites and monuments spanning centuries such as Mooghaun Hill Fort, which is a large Bronze Age fort.

The largest and most spectacular hoard of prehistoric gold in Western Europe was found at Mooghaun Lough 1km north of the hill fort. They also came across a huge amount of old abandoned houses; homesteads that are only the size of a small garage nowadays but were once someone’s pride and joy; the residents alas long since forgotten.
“Because of the nature of the roads and because the place is so deserted, we passed hundreds of cabins, gable ends of them and walls that were home. They had to walk the roads in a lot tougher times,” Paudí said.

The weather didn’t dampen their plans either and in the two years, Paudí said they were lucky never to get “a soaking” along the route.
“As Dad said, there’s no such thing as bad weather, just the wrong clothes. In Ireland, if you were relying on the weather you wouldn’t go outside the door, so what we did was wrap up well and away we went,” he said.

The Mid Clare Way is a way marked long distance walking route making a circuit of the region surrounding the town of Ennis. Linking up with the East Clare Way in Tulla, the route offers surprisingly quiet, scenic walking over remote hills and along peaceful river valleys and lake shores.

It begins at Newmarket-on-Fergus, then climbs to the western slopes of the Slieve Aughty range, with wonderful views across to Mullaghmore and the Burren. Passing through nature reserves at Dromore Woods and historic Dysert O’Dea, the route then follows the River Fergus valley to its estuary at Ballykelly and on to Clarecastle and finally back to Newmarket-on-Fergus. The entire walk is 140km in length but can be broken down into shorter sections and walked over a period of time.

The Mid Clare Way is best accessed at one of seven key trailheads, which provide information map boards and car parking and are located reasonably close to facilities, such as shops, accommodation, restaurants and public transport. The trailheads are in Newmarket-on-Fergus, Quin, Ballinruan, Ruan, Connolly, Lissycasey and Clarecastle.

When asked what the next project is for Michael, Paudí and Marcus, they plan to walk the Mid-Clare Way in reverse to get a completely different view of the walk. They continue to do an outing every fifth Sunday and plan to keep this tradition up.

The Mid Clare Way is managed by Clare Walks Ltd, who also manage the East Clare Way, a 172km circular route that crosses the Slieve Bernagh Mountains before descending to the Clare Lakeland areas around Tulla and Feakle. Circling Lough Graney, the route then climbs again over the rugged boglands of the Slieve Aughty Mountain back towards Lough Derg. The Way returns through the hills towards Scariff and on to complete its circuit back at Killaloe.

For the more casual walker, there are many well-signposted local loop walks of varying lengths centred on each of the towns and villages along the route.
More details are available on the Clare Walks website.

Carol Byrne is a reporter at The Clare Champion newspaper reporting on news in the East Clare area and the arts. She also covers the courts in County Clare and has received seven national awards for this coverage from the Law Society of Ireland and a National Lottery Local Ireland national media award for Best Community Story 2019. A Masters in Journalism graduate of NUI Galway, she also holds a Bachelor of Arts from the University of Limerick in Music and Media Studies, and a Higher Diploma in Irish Legal Studies. She began her career interning at The Limerick Leader and Clare FM, before taking up a full time post at The Clare Champion in 2006.
@@Carlsburn
Previous NUI Galway to host Brexit debate
Next Newmarket Celtic chasing Munster Junior Cup 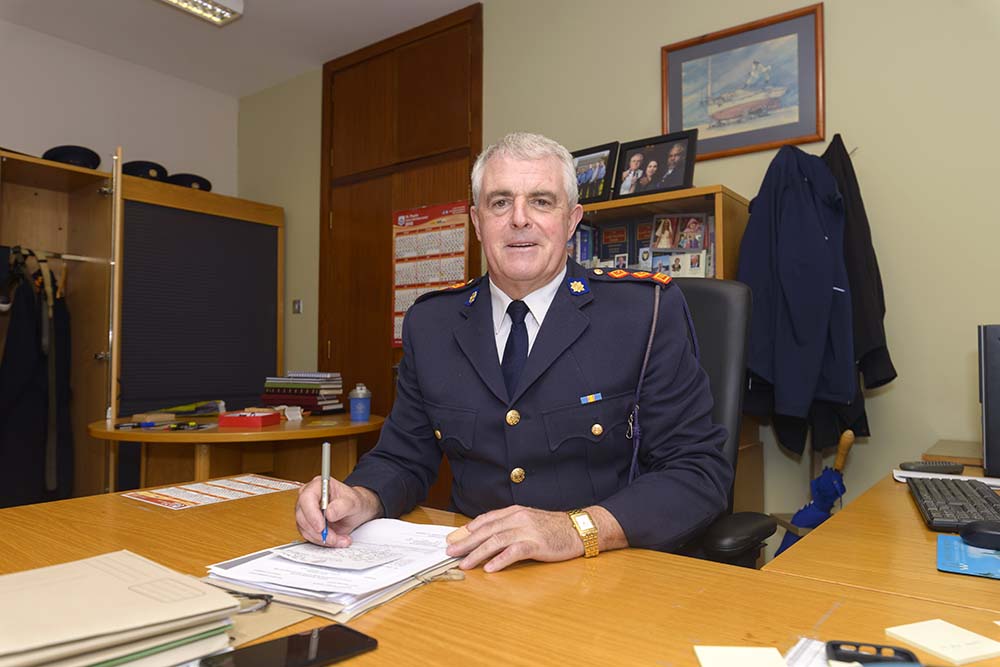