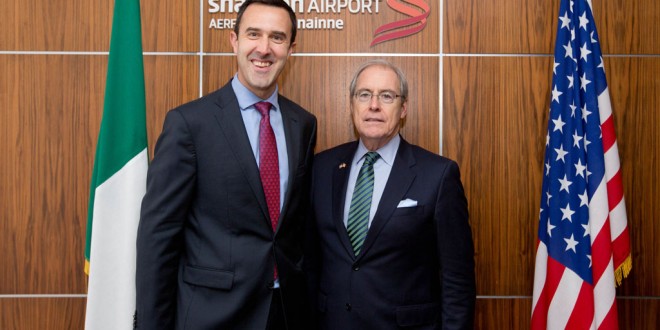 Andrew Murphy on the left with US Ambassador to Ireland Kevin O'Malley Photograph by Sean Curtin Pic Sean Curtin Photo.

ANDREW Murphy, Managing Director of Shannon Airport, is to leaving to take up a position elsewhere.

Mr Murphy joined Shannon Group in March 2014 as Chief Commercial Officer and took up the role of Managing Director of Shannon Airport in February 2017.

His decision comes hot on the heels of Niall O’Callaghan announcing he would be stepping down as Managing Director of Shannon Heritage, the tourism arm of Shannon Group.

Commenting on his decision, Mary Considine, CEO, Shannon Group said: “Andrew has played an instrumental role at Shannon Group since the early days of its establishment and we are very appreciative of his dedication and hard work throughout his career with us. I would like to wish him every success and happiness in his new career.”

Owen Ryan has been a journalist with the Clare Champion since 2007, having previously worked for a number of other regional titles in Limerick, Galway and Cork.
Previous Bord na nÓg Peil Reverse Decision To Drop Clare Minor Club Championship Age Eligibility To U-17
Next Three weeks Covid clear