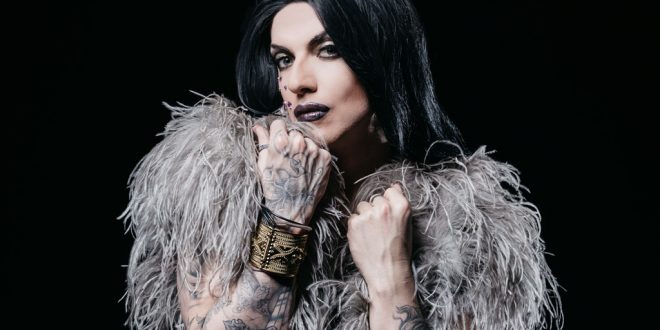 CRUEL, sickening homophobic violence overshadowed Garrii Bailey’s teenage years in Shannon, but now he is bringing his drag act back to his hometown in November.

In the aftermath of last year’s same-sex marriage referendum it is easy to forget how deeply ingrained homophobia was, to the point that violence and verbal abuse aimed at gay people was relatively commonplace, something which often went unremarked upon. But Garrii’s stories of growing up in Shannon during the 1990s shine a light on just how intolerant things were in the quite recent past.

“I’m kind of open about speaking about it now because I feel like I’ve got respect for being who I want to be and I feel like I can talk about it. We had our house bricked, egged; my mum’s car got thrashed. I used to have to walk down a boreen to get home and I’d be petrified. I even walked through it the other day and I was petrified still. It’s never going to leave me, I just now have to deal with it a bit better. It was really hard, I’d wish no one would go through it again.”

Garrii is dyslexic and the first bullying he experienced centred around that but, as time went by, his sexuality became the focus of his tormentors. “Once the bullies got bored with that side of it, they kind of picked on something else. I’m not the most masculine of guys so they picked on me and when they saw they were winning, it kind of gave them enough strength to keep on going. They kept on pushing further and further and it became violent. I used to get beaten up a lot, it was pretty hideous.

‘I wouldn’t go outside the door on my own’

“It was after school nearly every day and then, at weekends, I was so scared, I wouldn’t go out or my mother would drive me to the Town Centre and I’d make sure she was there to drive me back. I’d be very wary of being around people, even with my mum I was quite scared. That went on for a good few years, I wouldn’t go outside the door on my own. I used to live right next door to my school and I used to climb over the fence to get in, because I wouldn’t go through the front doors. I was petrified.”
Facing a daily dose of violence was hardly going to see him excel in academia and he hated his whole experience in secondary school.

“Nowadays I’m quite into my fitness and I would have been good at PE but there was no way I was going to do PE if those bullies were there. I’d never get changed in the changing room because the bullies would be there. I’d skip classes. I hated German because I was stuck on a type of chair that I wasn’t able to get out of. I just started bunking off and then there was being dyslexic as well, which only got diagnosed in 2012. I never knew, they just told me I was stupid and I never got help with anything.”

Even after he left school, there was still rampant homophobia around Shannon, which a boyfriend of Garrii’s experienced through threats of violence back in the year 2000. “I came back from the UK for a while. I had met a guy there and I had commitments here with hairdressing training and stuff. He moved over to be with me for a little while and people used to come up to him and threaten him to get out of the town. We broke up anyway, it wasn’t to do with that but he hated it there.”

A trained singer, Garrii created Shyanne O’Shea in Ireland but left her alone after moving to the UK. However, a brush with mortality after contracting meningitis led him to review things.

“When you are a child and you touch a flame, you don’t have a tendency to go near that flame again. I was bullied really badly for who I was trying to be when I lived in Shannon the first time, so when I came over here [UK], I didn’t want to feel like that again, so I put her away. But I was given two weeks to live about four years ago and it was a big wake-up call. It kind of made me think to myself, you’ve only got one life and if you’re not happy in it, what’s the point? I resurrected her if you like and since then it has completely taken off.”
On November 4, he will bring the show to the Shannon Springs Hotel. Garrii says the freedom of being Shyanne is very important to him.

“I always had a bit of fear of performing on stage as myself. Once Shyanne was created, I was able to let loose, get really creative with the entire show and it has grown and grown. I sing live, tell a few jokes, keep the entertainment quite light and fun. I’m flying some talent over from the UK to Ireland and I’m constantly searching for talent in Clare and Limerick, so I can include other people into my show who are local. I have an amazing singer at this one in November. I used to actually babysit her, which is crazy. It’s a variety show, its going to be fun.”

Whatever damage was done to his own confidence and self-worth isn’t relevant when he performs as Shyanne, he feels. “I am insecure, just because I’m on stage in a dress, doesn’t mean I’m not. That’s a shield for me, a costume and I become someone else. As I’m saying it, it’s kind of making sense; I haven’t got confidence as Garrii, that confidence got ripped away years ago, so I’ve kind of created a new person and started afresh. She’s kind of untouchable, you wouldn’t mess with her!” he laughs.

Given what he suffered in the past, he is delighted and surprised with the warm reaction he is getting to his show now. “People back home in Shannon have been seeing my videos and asking Garrii can you come home and do a show? I was saying, ‘oh I don’t know’ but, this time, as soon as I landed, people were asking where are you staying and saying they need tickets. The tickets have been selling and selling, it’s amazing. I put it on the Shannon Community Facebook Page and it just went viral. After that interview on the radio, I’ve had mothers messaging me and saying this is inspirational, that they have an inkling their son is gay or something like that, and that it is so nice to hear it’s alright.”

Garrii was interviewed on local radio about his background this week, and he feels the reaction he has been getting to himself and his show is helping him come to terms with the wrongs that were done to him in his home town.
“I think even talking about it on radio and talking about it to yourself is giving me closure anyway. I’m not one to hold grudges, it’s amazing the support that I’ve had and it makes me feel like I still have a home there.”

Some of the support he has got has come from very surprising quarters and perhaps reflects the journey many people in Clare and Ireland have been on, moving from narrow-minded bigotry to acceptance.

“With social media and stuff I’ve seen most of the people that bullied me. They’ve grown up, I’ve had one apologise; he said ‘I’m so sorry and I’d like to see your show to give support’. A lot of them have kids and if your kids come home with bruises every day and they’re being stopped from being who they want to be, how would you like it?

“Everyone had to grow up and I’m hoping I’ve refreshed a lot of their brains and stuff and they know that what they did to me was wrong. Hearing that apology from him, I was scared of him for quite a long time but having an apology from someone like that, I thought I will accept that because you have grown up. This happened when we were all teenagers but you have to grow up, you’re a man now, you have kids, maybe it has hit you a little bit and you see how successful I am doing what I absolutely love. It was overwhelming, it put a smile on my face.”

He has seen some of the other people involved in the bullying recently in Shannon, but didn’t speak to them. While he says he would have no problem talking to them, he won’t particularly put himself out to do so.

“If they said ‘Hi’, I would say it back but I’m not going to go out of my way. What’s the point in doing that, what if they haven’t changed and they start again?”

Homophobia and discrimination are still out there he feels, but there is more tolerance now and he won’t let bigotry upset him.
“A kid came into my mate’s house last night and he was like ‘Mammy, he’s got his nails painted. They’re cool!’ This is a lad that plays soccer and hurling and stuff. There are still going to be people there that aren’t going to like what I do and not like me being gay and stuff, but I’m not having that affect me anymore.”

When he was being beaten up and his home stoned in the ’90s, it would have been inconceivable that same sex-marriage would eventually be endorsed by a very large majority of the public. Garrii was long a resident of the UK when it did happen but he was delighted with that result. “Everyone I know says they voted yes. I think it’s awesome, the fact that Ireland is the first country to vote for it is brilliant. I’m so, so happy about it.”