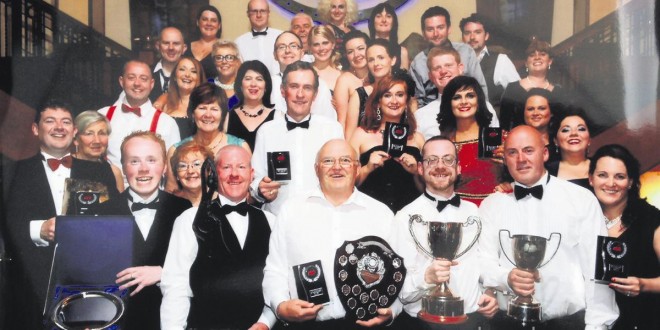 The Shannon Musical Society cast and crew at the AIMS awards ceremony.

Shannon Musical Society  is still celebrating its most successful haul of trophies in 21 years, after capturing six awards at the “musical Oscars”.
Members came home from the Association of Irish Musical Societies (AIMS) with awards, with arms full of trophies last weekend.

More than 1,100 people attended the glittering awards ceremony in Killarney’s INEC at the weekend.

The most coveted award is for Best Overall Show and Shannon were delighted to receive second place, against stiff competition.

The last time they were nominated for this award was in 2006, for The Wiz. Prior to that, it was for The Hot Mikado in 2000.

The society was nominated for six awards after its production of Jesus Christ Superstar, which was staged last February. These included nominations for Best Front of House, Best Ensemble, Best Director, Best Overall Show, Best Visuals and Best Technical.

SMS has won many awards over the years but not since 1993 has it been nominated for so many accolades. The first award to be won was for Front of House Management, under the leadership of Tom Keane.

Then the award for Best Ensemble, which was a company award, for the scene around the song, Could We Start Again Please, sung by Lauren Dunne and Joe Bracken, accompanied by SMS chorus, under the direction of Carmel Griffin.

In the scene, they are lamenting the betrayal of Jesus (Eoin Sheedy), under the watchful eye of Judas (Jared Nadin).

Seán Power, who hails from Galway, received the award for Best Director. Sean has directed for Shannon before, with his twin brother, Brian, but this was his first time directing solo. He thanked the production team for their encouragement and support.

“We are thrilled our society’s hard work has been recognised by AIMS this year. Most of the nominations were in recognition of collective or group efforts and that gives everyone involved in this production recognition for their input and some level of ownership,” said chairman, Derek Barrett.

Shannon man, Martin McNelis, who has been in numerous SMS productions, won Best Actor for his portrayal of Peron in Limerick Musical Society’s Evita last March. Martin has been nominated three times in the past four years with LMS.

Shannon Musical Society’s next production will be Sister Act, in February 2015. For more information, check the society out on Facebook.