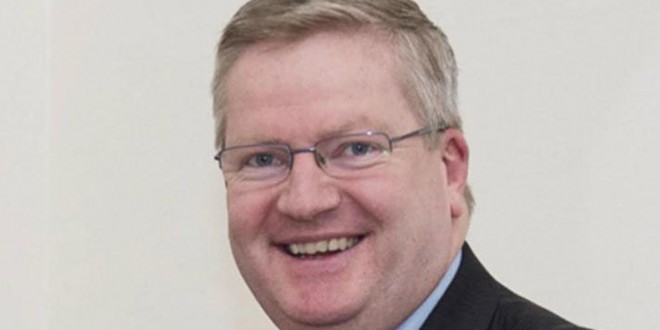 SHANNON’S Fergal Barry has been appointed president of Galway-Mayo Institute of Technology.
On Tuesday, he said, “I’m delighted with the appointment. It’s very rare that opportunities like this come up to influence the development of an organisation at the heart of so many people’s lives, futures and dreams. It’s an organisation that has an excellent educational history, really passionate staff and it’s playing a central role in the reform of our higher education system, which is part of the reform of our public services as a whole.”
Fergal is the son of Tess Barry of Fearnóg and the late Pat Barry. He attended St Senan’s National School and St Patrick’s Comprehensive School and currently lives with his wife, Deirdre in Limerick City.
Tess is extremely well known in Shannon, being involved in various local organisations.
“The stones on the road would know my Mum,” Fergal jokes. “The apple doesn’t fall very far from the tree and I bring with me that experience of engaging in society and bringing people together from diverse organisations and cultures.”
Music has been a passion of his for many years. “I was church organist in Shannon for about 18 years, between Mary Immaculate Church in Drumgeely and Ss John and Paul’s, up until about 2006. Judo was my sport of choice; I was very involved in judo. I like outdoor activities and I take part in hillwalking. I’m a keen gardener and I’m big into contemporary arts and crafts. I’ve quite a wide range of interests.”
He acknowledged the Leaving Cert students who received exam results last week and said, “Next Monday is the closing date for acceptance of Round 1 offers and for those who don’t get an offer, don’t be too disheartened. There are plenty of other opportunities to pursue your dreams.”
He also said he is looking forward to working with the staff, students, management, governing body and stakeholders of Galway-Mayo Institute of Technology.
As vice-president of LIT for Research, Enterprise and Development, Dr Barry has particular expertise in supporting business growth, not least in promoting the start-up and SME sector. He has been an active board member of Limerick Chamber, serving as both vice-president (2012) and president (2013) during a key juncture in Limerick City’s development.
During this time, he led the merger of Limerick Chamber and Limerick City Business Association. He was a founding member of the Limerick Economic Forum, leading the changes under the Limerick 2030 Economic and Spatial Development Plan.
Dr Barry is the founder of seven business incubation centres. His drive and innovation was central to the establishment of LIT’s unique Enterprise Ladder of incubation centres and business development programmes across the Mid-West Region. The first of these centres is the Hartnett Enterprise Acceleration Centre at LIT’s Moylish campus, which was developed in 2003 with €3.1m capital expenditure funding secured from Enterprise Ireland.
Dr Barry was also instrumental in establishing Europe’s first third-level franchise centre, the National Franchise Centre in Limerick in 2011, a unique partnership between chambers of commerce and higher education. The latest centre under planning at LIT is the International Fashion Incubator Limited (IFIL), which will capitalise on the strengths of LIT’s Limerick School of Art and Design. Across LIT’s campuses, these incubation centres have secured capital funding of €12m, supported over 150 start-up companies and the creation of nearly 700 jobs, returning €130m in salaries per annum.
He has been to the forefront of establishing LIT’s Enterprise Advisory Boards, LIT’s Thought Leadership Team and the LIT Foundation established in 2011, comprising senior national and international business people, which has delivered significant philanthropic benefaction.
Before joining LIT in 1996, as a member of the lecturing staff, he worked as an analyst with Molex in Shannon. He is currently vice-president, president elect and a Fellow of the Institute of Chemistry of Ireland (FICI), he holds membership of several esteemed national and international professional bodies, he is a registered European chemist, an Irish American Partnership Scholar, he was awarded a doctor of philosophy (PhD) in physical chemistry from the University of Limerick and an executive masters in business administration (MBA) from University College Cork.
He graduated with an honours degree in science from Cork Institute of Technology in analytical chemistry with quality assurance. He was awarded associate degrees in chemistry from Limerick Institute of Technology and from the University of Greenwich. As an undergraduate, he was awarded a gold medal in chemistry and was institute and national student of the year