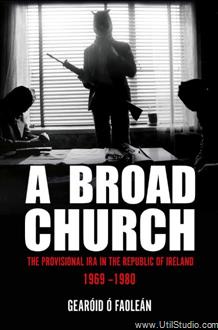 Shannon historian reflects on Provo history in the South

SHANNON historian Gearóid Ó Faoleán’s book A Broad Church – The Provisional IRA in the Republic of Ireland, 1969-1980 has just been published and has provoked a huge media reaction north of the border.

The 31-year-old is a past pupil of St Patrick’s Comprehensive and is now based in London. He is getting married next month.

Obviously, his home town has a very large northern population, while his own mother arrived from Belfast in the early ’70s, as the Troubles raged.

The subject of Republicanism in the south really came into focus for Gearóid when he was a history student based in Limerick. “When I was in Mary Immaculate College, I was studying history and we had to do a final year project. What I looked at was the settlement in Shannon from the North, the push and pull factors and why they ended up here. It’s easy to see why they left the North but I looked at how so many ended up in Shannon.

“That was kind of an oral history, I was interviewing people. Most of them were very normal people, who just wanted to get on with their life once they got out of the situation in the North. But there were occasional references to Republicanism or how they might have been treated with suspicion by the gardaí. That’s what piqued my interest. It just never occurred to me growing up in the middle of this and I started to think some stuff must have happened down here. Only then looking into it more, I realised the amount of activity that happened in the south in general in the ’70s and ’80s.”

While he wants to stress that there wasn’t institutional collusion in the Republic, Gearóid was “very surprised” to find out just how prevalent Republicanism was among the general public in the South and his research found that sympathisers came from all sorts of political and social backgrounds.

While the support was often very overt when the Troubles were at their fiercest in the early ’70s, he isn’t sure that it ever really declined very significantly.

“It was very strong in the early years and it crossed every socio- economic line, all classes, all age groups; it was really significant. What was surprising, that I mention in the book, is there were people who had a real stake in society, senior civil servants with a pension and everything else. Even at that level, you had people who were at the very least sympathetic. The thing is as the ’70s went on, it’s hard to say whether that support died down or whether people realised it was best to be discreet because the Government was making things very hard for people who were willing to be open about supporting Republicanism.”

The duration of the IRA’s activity could not have continued without strong backing, he feels. “I think if you look at the IRA’s campaign, which went on for 30 odd years, that can’t have happened without significant support. You have had accounts that come out recently like Kieran Conway’s book Southside Provisional. I interviewed Kieran for the book as well and he said he had his own network of middle-class South Dublin people, who supported the IRA and that didn’t die down after Bloody Friday or Birmingham; it continued into the ’80s and ’90s.”

While establishing the numbers involved in an illegal organisation is by its nature very difficult, he says that hundreds
of people from the South went through Portlaoise Prison in the 1970s, while some 200 Dubliners sought to join the IRA in the immediate aftermath of Bloody Sunday.

“Anyone I spoke to, on or off the record, would say the same kind of thing. They would have their own personal anecdotes of support and when you build that up into a bigger picture, you start to see this wasn’t a very small isolated group,” says Gearóid.

Sinn Féin was the obvious political home for anyone with Republican sympathies but he says those involved in other parties also provided support for the IRA, even as those parties railed against the campaign.

“It crossed the boundaries. Matt Tracey was in the IRA and wrote a book about it; he talks about PD supporters. Kieran Conway talks about Fine Gael supporters. It didn’t matter what your party affiliation was. That’s the thing that people need to get away from when they think what was a Republican supporter, there was no stock character.”

Shannon was a hotbed of support for Republicanism and he says that in 1974 when £140,000 was stolen from the Chase Manhattan bank in the town, it was then the largest robbery in the history of the State, the sum equating to millions of euros today.

The airport was also used by the Provos, with high grade weapons coming in. “The first rocket launchers came in through Shannon Airport. They were supposed to come into Farranfore but they were diverted to Shannon and it was a quick scramble in order to get people ready to help this small aircraft,” says Gearóid.

The town was watched closely by the gardaí during the Troubles, particularly at certain times. “When Dominic
McGlinchey was on the run, there were soldiers in Shannon, similarly with Don Tidey and when Tiede H e r r e m a
was kidnapped in 1975 that was just out by UL, so Shannon was flooded again. The way people talk about it, it’s like every Northerner’s door was kicked in.”

However, when the peace process began, local republicans very much stuck with the leadership. “It stayed with Sinn Féin, it didn’t split. I think that’s an interesting point. It shows the Northern connection because Gerry Adams and the Northerners piloted that shift in policy and Shannon stayed on that path with them,” he concludes.

Owen Ryan has been a journalist with the Clare Champion since 2007, having previously worked for a number of other regional titles in Limerick, Galway and Cork.
Previous Gardaí Launch Investigation into GAA Coach
Next HSE failures continue 10 years on