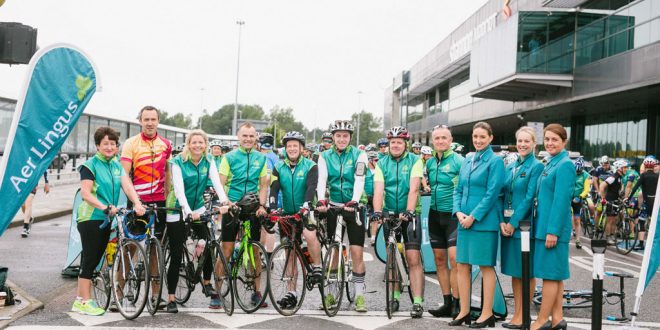 Over 160 cyclists were recovering their weary limbs but with a great sense of satisfaction after undertaking a 110km round trip straddling Clare and Galway in the Aer Lingus Charity Cycle out of Shannon Airport, which raised €10,000 for Shannon Group’s designated charities.

Cyclists from Clare, Dublin, Galway, Kerry, Limerick, Tipperary and Wicklow geared up for the event at Shannon on Saturday morning, having been set off on their merry after the starter flag was raised by Rose of Clare Leah Kenny and Shannon Group Chairman Rose Hynes just after 9am.

And in a new addition this year to the popular charity cycle, another 100 participated in relays on static bicycles at Shannon Airport to help raise additional donations, among them airport employees, airport passengers and local businesses.

The cycle, now in its third year, is organised by Shannon Group staff in aid of their designated charities, which this year are the Irish Children’s Arthritis Network (iCAN) and Abalta Special School.

This year’s cycle travelled west from Shannon, up to Gort via Kilmurry, Kilkishen Tulla and returning via Clooney, Quin and Newmarket-on-Fergus, before making it back to Shannon.