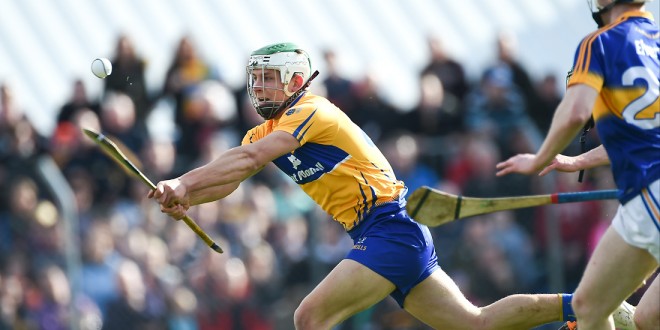 Aaron Shanagher has been included in the Clare panel for Sunday's All-Ireland semi-final clash with Galway. Photograph by John Kelly.

Earlier the footballers, despite going down to Kildare, had sealed a place in the final of division 3 in the league while, in soccer, Clare had qualified for the Oscar Traynor final with victory over Donegal

Heading into Sunday’s Allianz hurling league quarter final against Tipperary wthout eight players that started in last summer’s championship qualifier clash with Cork, all ruled out due to injury, hopes of a Clare victory weren’t particularly high and the majority view was that Tipperary would go through for another tilt at Kilkenny.

The Premier side looked to be on their way to victory when, with seven minutes remaining the visitors had edged into a three point lead but a storming finish saw Clare book a semi-final date with All-Ireland champions Kilkenny.

While Tipperary will point to a string of missed opportunities—they hit eighteen wides—few can quibble with Clare’s win on a day when a number of newcomers to this level of hurling played key roles.

Leaving certificate student, Aron Shanagher from the Wolfe Tones club in Shannon, was introduced for the final fifteen minutes and he scored Clare’s second goal, three minutes from time, a score which saw the Banner men regain the lead. Twenty year old David Fitzgerald was sent into the game with seven minutes remaining and, in that time, he won vital possession while Cathal O’Connell, introduced early in the second half, also made a huge impression.

It wasn’t all down to the substitutes as there were some outstanding performances from such as team captain Cian Dillon, named as the man of the match, John Conlon, and Darach Honan to mention some.

The sides were level at 0-2 each after fifteen minutes before John Conlon grabbed a delivery from Aaron Cunningham and fired home the home side’s opening goal on their way to a five point lead with ten minutes remaining in the half.

Four unanswered points brought the visitors right back into contention and when the half time whistle sounded just two points separated the sides with Clare ahead,1-7 to 0-8.

There was more urgency in Tipperary’s performance in the third quarter at the end of which the Premier side had opened a one point lead. John McGrath, Tipperarys best forward on the day, put his side two clear with fifteen minutes to go but good points from Darach Honan and Conor McGrath levelled the game with thirteen minutes still to play.

John McGrath put Tipperary back in front two minutes later and Clare were fortunate that the corner forward’s effort didn’t end up in the net. McGrath and substitute Jason Forde followed with points and the visitors looked to be edging ahead.

A Cathal O’Connell point kept Clare in touch before Shanagher fielded brilliantly and raced through to the crucial goal. John Conlon followed with a point and Clare were two ahead with just a minute of normal time remaining.

A Padraic Maher point kept Tipperary in the hunt but despite having two late opportunities, they failed to add to their tally and after three and a half minutes of ‘injury time’, referee Diarmuid Kirwan’s final whistle was followed by a huge cheer as Clare sealed a place in the semi-final against Kilkenny.

Cathal Barrett, Padraic Maher, Michael Breen and John McGrath were best for Tipperary who did miss a lot of scoreable chances.